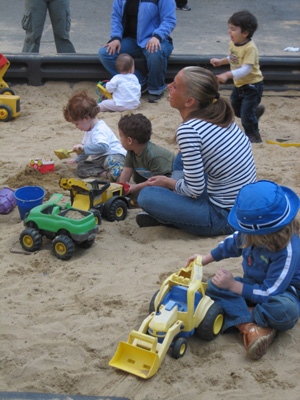 Photo courtesy of the author.

Step out onto Brooklyn’s streets this month and you won’t miss the outpouring of mothers and their charges returning to sidewalks and playgrounds from the Brooklyn Heights Promenade to Dyker Beach Park. Watching this springtime resurgence, it’s easy to forget that mothering today is as politically charged as ever. Despite the intensely personal nature of child-bearing and rearing, the compulsion to evaluate others mothering is evidenced everywhere—from the Bush administration’s “family values” to the stranger walking past you on the street. As one mother interviewed for this article says, we’ve “come to view kids as universal property.”

The mother, a 33-year-old former web designer, is a stay-at-home mom in Fort Greene. Like most of the mothers interviewed for this article, she prefers to remain anonymous because of the inflammatory and personal nature of the motherhood debate. She describes how she was once caught in a rainstorm with her children and confronted by a stranger angry that she would have her children out in such a storm. “It’s raining,” she was warned. “Yeah, it’s raining! That’s why I’m running!” seemed her only possible response. “This culture feels it can comment,” she says.

Another mother, a 37-year-old talent agent in Brooklyn Heights, recalls receiving similar commentary from strangers. “I once was taking a car service home from the airport – from a work trip – and the driver told me that mothers belong at home. Needless to say, I didn’t give him a tip.”

As long ago as the American Revolution, when mothers were entrusted with raising faithful patriots, women knew that their domestic work was vital to the nation. But later, the Industrial Revolution shifted the home’s function from production to consumption, and by the time the 1920s arrived, replete with hedonistic consumerism, it seemed that the work which moved the world forward no longer happened within the home. All at once, women were describing themselves as “just a housewife.” Suddenly a huge portion of the population felt that domestic work, whether we approved of the way it was done or not, was not enough.

Today, one of the most contentious issues among mothers is whether to go back to work after the birth of a child. Choices in childcare have garnered some of the strongest feelings in the stay-at-home versus working mother debate, since Benjamin Spock infamously placed his appeal for working mothers to stay home in his 1946 opus’s final chapter, entitled “Special Problems.”

A recent post on urbanbaby.com reveals how deeply this anxiety is felt among New York City mothers—to them, you’re either a S.A.H.M. or a W.O.H.M.: “I always thought I’d be a S.A.H.M. [stay at home mom] because I don’t want a stranger to raise my kids. But we’re about to start trying for our first, and I’m freaking out about being isolated,” one woman writes. The responses flood in almost immediately: “Just because you work doesn’t make you a stranger to your kids. Your DH [dear husband] works – does that mean he will be a stranger to the kids? Duh. Stupid post,” says one. “Ditto. Ignorant post. My DC [dear child] adores me, he lights up when I get home and we spend plenty of time together,” says another.

“It’s unpopular to say that W.O.H.M.’s [work outside the home moms] are not raising their kids,” says yet another post. “People are very sensitive about it.”

A working mother, 39, shares a home in Dyker Heights with three generations of her Italian American family, and her mother cares for her 5-year-old after kindergarten each day. Most of her retail clients are wealthier stay-at-home mothers. “It depresses me. They’re so sad. All they do – I think it’s pathetic – they come in and ask ‘What’s new?’ They’re insecure. They’re bored. They’re never with their kids, but they don’t respect their nannies,” she says.

“To be 100 percent honest,” says the working mom in Brooklyn Heights of her stay-at-home counterparts, “on occasion I find myself being superficial. You have that moment at the playground where the stay-at-home moms have sweatpants on and no makeup and just look haggard and you think, ‘Wow, I look good!’”

But while enmity would seem to be lobbed between the two groups, mothers do recognize the vulnerabilities of their individual positions and the sacrifices each group makes. The working mom in Brooklyn Heights estimates that she travels for work an average of one to two nights a month and attends an evening work event once a week. She acknowledges an easier bond with fellow working mothers, but concedes, “Most of my friends work, so I think I identify with them more. But, all in all, I don’t think either situation is perfect. Most stay at home moms I know feel isolated and bored and tired of being with the kids all day, and most working moms I know feel overwhelmed and guilty.”

A television producer, 37, from Park Slope, who says her nanny works 60 hours a week, admits feeling distressed by the long hours her career requires. “I didn’t see my 4-year-old or my 2-year-old take their first step. Just bad timing. My husband’s trying to make partner too. One time I came home and the nanny told me that the eldest had asked her ‘What is God?’” The shock this secular liberal felt at having someone from an entirely different religious and political background field her toddler’s question is palpable. “That’s a line I didn’t want crossed, but how do I explain that to a little kid? Or even to a nanny who’s reliable and loves them?”

The Dyker Heights mother describes other sacrifices, though she can’t imagine giving up her career. “All my friends work. What would I do home all day? Go shopping? Go to the gym? I have to be around adults. But a baby and work? It’s death to sex.” She continues, “I have a friend who stays home with 3 kids. She doesn’t have time to pee. She’s overweight. I was more tired home with the baby than when I went back to work. But if I didn’t have my mother, I don’t know if I’d have gone back to work. I don’t think I could leave my child with anybody else.”

Many working mothers feel they lack the very community some would rather avoid. Isolation is one of the biggest complaints for the working mom in Brooklyn Heights. Her 3&frac12;-year-old is in school five mornings a week, and she and her husband employ a nanny from noon to 7 on weekdays. “It is almost impossible to have a sense of community at the school because I’m never there at pick up when people are planning play dates etc. I always feel that, if there is an emergency, I really have very few people to count on. It’s simply that I don’t have time to form the bonds.”

A mother from DUMBO, 35, works as a New York government manager and has a 2&frac12;-year-old daughter who attends daycare from 9 to 6 five days a week. She describes a similar autonomy: “I guess I feel like the parents I know really all make it work in their own way. We do have some casual friends through our daughter’s daycare buddies. I enjoy discussing age or stage things with them, but I don’t know that I’d go to them if I needed advice.”

The mother from Fort Greene says, “I have a big group of mom friends, and I’ve had a lot of support over the years. But my oldest breastfed until he was two and he still isn’t potty-trained. He gets up really late. Sometimes I dread play dates with children the same age. Other moms with a lot of time on their hands can form a lot of judgments.”

The DUMBO mother focuses on the importance of choice: “Obviously if we choose motherhood it’s a big impact on us physically and emotionally. It impacts our careers. I’m a working mother, but if my daughter decides to stay home when she has her family, that’s her choice. And I hope I’d respect it as right for her in her life.”

The Fort Greene mother is equally firm in the choice she’s made to stay at home: “We have to deal with difference. Isn’t at least third-wave feminism about appreciating our differences?” Mom cliques attacking other mom cliques. It’s no good for us—or for our children.

It’s exactly twenty-two years ago this very month that the Brooklyn Rail was given a sporting chance to prove itself.