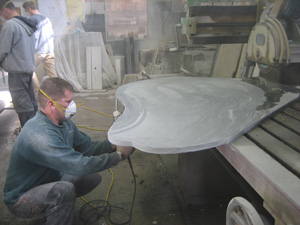 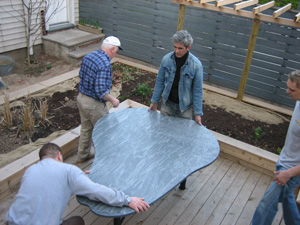 Photos courtesy of the author.

My mother loved pears, the shape of them. When my parents moved into an apartment, she seized the opportunity to ditch the Danish modern table we’d grown up around, and drew a big pear. She hunted down a beautiful slab of dark marble embedded with oyster shells, and had it cut into the shape of the pear. My architect brother-in-law designed two pedestals, and the marble pear became the family dining table.

My boyfriend Bob is extremely particular about tables, the shape of them. He loved my mother’s pear-shaped one. Newlyweds could rub knees at the tip, six or seven more filled out its curves, and it could seat 12 and still feel intimate. I wanted one.

Eventually my mother’s table made its way to my sister’s dining room in Cleveland. Soon after, Bob and I left Manhattan for the wilder shores of Williamsburg. Seduced by the big sky and the grimy remnants of industrial New York, we bought a little house on North 7th Street. Behind its drab exterior sat a little garden—or what became one after an above-ground swimming pool had been carted away and a lot of dirt carted in.

One of our favorite things about our new neighborhood was the industrial-residential combo: factories and warehouses cheek by jowl with vinyl-clad houses and brick tenements. Typically, cities separate manufacturing and residential areas to insulate inhabitants from industrial noise and pollution, and factory owners from complaint-prone residents. Williamsburg and Greenpoint are exceptions. A century after its industrial heyday, this is still the place to buy galvanized sheet metal by the acre or lease a dump truck. Exploring our new neighborhood, Bob and I loved peering into cavernous warehouses or over graffiti-covered walls, stumbling on dumpsters full of salmon heads, mountains of manhole covers, linear feet of rye bread.

As the weather warmed, we started checking out patio furniture, but most of it seemed designed for Palm Beach pool-sides or faux-Adirondack retreats. Then it hit me: we needed a pear at the heart of our new garden. So I asked my sister to make me a template like the one my mother had drawn 25 years earlier. On Bob’s and my next outing, we looked into the dust-filled interior of Marble & Stone Creations, Inc., just around the corner on Kent Street. “Why don’t you ask them about the table?” Bob suggested.

I made my way past shy Polish stoneworkers and racks of marble and granite and limestone slabs, and spread out my template in the crowded back office of handsome, look-alike owners Gregory and Harrison Muller. They didn’t bat an eyelash. To spare me the expense of purchasing an entire slab from a wholesaler, they checked out the “scraps” on hand and sent me home with a sample piece of Pietra Cardozo, a warm gray stone from the Tuscan town of Cardozo.

I ran right back with a thumbs-up from Bob and a deposit. I also asked what the neighborhood had been like in 1991, when the business moved here from Manhattan’s Bond Street.

“Still very rough,” said Gregory. “Tons of prostitutes and hardcore junkies. On the alley running to the river from North 7th Street you’d see homeless people scampering out of homemade shelters. Harrison walked the dog one day and found a dead body with its head bashed in.”

“What about legs for the table?” he asked, back to business. “You want them in stone?”

Unlike the big door into Marble & Stone Creations, which generally sits open to a spectacular view of the midtown skyline, Falcon’s door was shuttered down to the sidewalk. But when I knocked on the little side door, Wally Siegel ushered me into the home of Majestic Reproductions. Low-hung fluorescents and a single skylight illuminated a wildly cluttered desk, walls covered with bars of chrome and brass and angle-iron, hulking gray machines, metal furniture-in-progress, and flecks of gold leaf hovering in midair.

Majestic moved to Williamsburg in 1982, when the landlord sold the showroom on 21st Street out from under Wally and his brother. At the time they’d been doing business with Durable Iron Works, which was run by an 80-year-old Ukrainian named Wanger. Mr. Wanger agreed to sell the business on North 7th to Wally’s brother on the condition that they employ him three days a week, “and we needed him — he was an ace mechanic,” said Wally.

“We have 100-year-old equipment from that guy, drill presses, a bender that was a Rube Goldberg special, and they work great, better than the computerized stuff. Wanger was a hardened guy. When we got here, there was one light on, and he’d turn it off when he ate lunch. In the winter, heat, forget it. We came in and turned the heat on.”

Sales at Majestic are handled by Wally’s chatty, Canarsie-born nephew Marc Siegel, who recalled the days of hookers and crack addicts on North 7th when I asked him what the neighborhood used to be like. “Every time I walked out the door I was propositioned. I saw a guy sitting in a truck put a needle in his vein — and then he drove away!”

As Marc tells it, neighboring Brownsville went downhill because the original residents moved out and nobody kept an eye on things. But the old Polish ladies in Williamsburg and Greenpoint hung in there. “Here, they kept sitting out front, and they saved the neighborhood.”

Then came the kids for the cheap rent—“crazy white hippies, living in communes,” in Wally’s words. The pioneers arrived in the early ‘80s, just a trickle at the end of the decade when boarded-up storefronts on Bedford Avenue began to open up, and then a flood in the ‘90s. Eager to cash in on the influx and the resulting spike in residential rents, dozens of owners converted their industrial buildings. The Greenpoint-Williamsburg Rezoning of 2005 accelerated the process. The change was primarily intended to allow residential building along the river, but despite explicit community demands that the neighborhood’s industrial tenants and mixed economic makeup be protected, quite a few inland blocks were rezoned as well—including those around the future home of the pear table.

The results are visible everywhere you turn. Famous for their suburban McMansions, the Toll Brothers set up shop on Bedford Avenue to sell the 40 condos in their North 8 building, now nearing completion. A block south, the warehouse at the corner of North 7th and Kent just yielded to a battalion of earthmovers. Another Toll Brothers development on the river at North 5th, the first of the three luxury high-rise towers of Northside Piers, seems to be sprouting a story a day (23 down, six to go).

Sandwiched between these sites, Marble & Stone Creations is feeling the squeeze in more ways than one. “We have construction vehicles blocking the entrance to shop on daily basis,” Harrison complained. For a year now, Gregory’s been snooping around looking to buy property. “The writing’s on the wall because we rent,” he says. “We know that sooner or later we’re going to get pushed out.”

Walk-ins like me and my pear are rare, and Gregory doesn’t envision new work coming from future condo dwellers. Business is finally good enough that he figures the shop could actually qualify for a mortgage, “but the prices are incredible. It would be sad if we had to leave.”

The owner of their building won’t sign a long lease, but he sympathizes with the Mullers’ predicament. “He’s a tradesman like us. He’s not a real-estate developer,” Gregory explains. A “steel guy” with a shop in East Williamsburg, the landlord can’t compete with the scale of new construction: most of the steel going up in the neighborhood is coming from India.

City officials describe the rezoning as an inevitable consequence of the flow of industrial jobs to the developing world, “but in fact it’s not a post-industrial economy,” protests Peter Gillespie, executive director of Williamsburg’s Neighbors Against Garbage. “It’s true that widget manufacturing can be done cheaper in China, but anything that could have gone overseas went years ago.” Yet, all over the city, mixed-use zoning is yielding to the seemingly inexhaustible thirst for luxury housing.

“All the Ma and Pa operations are gone,” says Marc Siegel. “They’re being driven out because of the zoning.”

The jobs that are disappearing can’t be outsourced. They rely on the unique combination of a huge population of artists and designers capitalizing on an established base of manufacturing expertise and facilities. A lot of industries—set-building for the City’s theaters and television studios, for example—thrive on this mash-up. The area’s furniture-makers, carpenters, sculptors, metal- and woodworkers compete on the basis of skill and taste, not price.

They also require easy access to their customer base in the tri-state area; Gregory may pop into Manhattan several times a day. Neither they nor their clients want to schlep to Jamaica or Sunset Park, while a trip across the river isn’t the hurdle it used to be.

“Now they see the high-rises on Kent and they’re all saying, ‘Wow what’s going on here?’” Siegel comments, shaking his head at the prospect of glitz on the waterfront.

Having paid a fortune for our cruddy little house, Bob and I are hardly innocent bystanders, but we fervently hope Williamsburg’s distinctive mix of artists and manufacturers persists. And we love the table that epitomizes this mix.

A week after I visited Majestic, the legs were delivered from across the street and the table rolled around the corner on a dolly. Harrison and three workmen lifted the slab into place, stepped back to admire their handiwork, and headed back to the shop. Bob and I stayed in the garden, beaming.

The pear is elegant and weatherproof, and we got it made without leaving the block.

Ashton Applewhite lives in Williamsburg. She writes for the American Museum of Natural History.

Reflections on Climate as Keyword and Shape-Shifting Noun

What does “climate” mean? Professor Jim Fleming argues that it deserves to be a keyword in the vocabulary of culture and society.

As Sillman explained in Artforum, much of what interested her “didn’t seem to rate in art history, to fit the correct teleology. Art historian friends who saw my list were like, ‘Who are all these people?’ I was like, ‘Are you kidding?