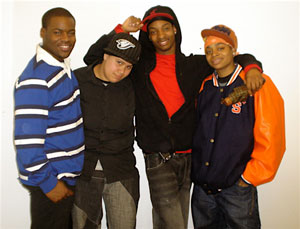 Teenagers at the Ali Forney Center, Photo courtesy of the author

As the queer community continues its crusade towards greater visibility and enjoys the benefits of mainstream representation, there remains a vulnerable sub-group that has yet to enjoy these fruits of progress, and instead grows at an alarming rate: homeless queer youth. According to a 2006 study conducted by the National Runaway Switchboard, 42% of the 15,000 to 20,000 homeless youth in New York identify as lesbian, gay, bisexual or transgender (LGBT), a disproportionately high number when one considers that only 3 to 5% of the U.S. population identifies as LGBT.

“We’re in a period in history right now where young people are feeling emboldened to come out at younger and younger ages and yet there is such division in our society about whether or not to accept homosexuality,” says Carl Siciliano, executive director of the Ali Forney Center (AFC), a comprehensive program aimed at housing New York’s LGBT homeless youth, aged 13-24. “The reality is thousands of kids come out to these un-accepting situations and then thousands of kids get thrown to the streets. What I’m recognizing is that the LGBT community needs to create structures where if parents won’t support these kids and help them grow up in a healthy way, then we need to.”

Named for a queer homeless man who was murdered in 1997 at the age of 22, AFC was developed in 2002 by Siciliano, a veteran administrator of youth-oriented shelters, to provide safe, inclusive and dignified living spaces for homeless LGBT youth. Catalyzed by the gap in specialized service and the atrocity of Forney’s unsolved murder, Siciliano established a six-cot shelter in the basement of Metropolitan Community Church. The project has expanded to a day center and a handful of two- to three-bedroom apartments, offering 28 beds for homeless LGBT youth.

Before AFC’s establishment, the majority of homeless youth in the shelter system found shelter at the Catholic Covenant House, but the faith-based culture of Covenant House did not foster a sense of inclusiveness for many in the queer homeless community. “Many of our clients report having been frightened and harassed at Covenant House,” Siciliano says.

Speaking of a young queer man’s stay there, Siciliano elaborates: “The other kids in the dorm all gathered around him when he slept and pissed on him to show how they hated having a gay kid in the dorm. That’s the kind of stuff you hear all the time. Here you’ve got these kids who’ve been rejected by their families and thrown to the streets and the one shelter they can go to they get degraded and terrorized and beat up. In those days it was just an awful situation.”

Since AFC’s establishment, other New York-based shelters aimed at inclusive housing have developed, yet none have matched the comprehensiveness and size of AFC. “We have a continuum of services that goes from connecting the kids on the street, stabilizing them, sheltering them and housing them,” Siciliano says. That continuum, funded with an estimated 70% government grants and 30% private donations and revenue from fundraising events, includes a day center open Monday-Friday 10am-6pm, located on 22nd Street in Chelsea’s Gallery District. There are also three emergency housing apartments with 18 beds and two transitional apartments offering 10 more. The three venues—day center, emergency housing and transitional housing—are designed to be used in sequence by LGBT teenagers on the street, the day center being a point of entry.

“We bring the kids in to do their initial assessment,” Siciliano says, “and we have showers and food and provide medical care and mental health treatment and a psychiatrist, and case managers who help the kids access a variety of services that are, in theory, available for them.” The director of the assessment center, who is a trained clinical social worker, assesses whether there are legal, foster care, drug-related, and/or mental health issues that need to be attended to immediately. On Fridays, a medical doctor and medical assistant are on hand to do anything from routine physical examinations for the largely uninsured client-base, to asthma care, to STI screening.

It is at this point, post-assessment, that an AFC client adds his or her name to a 50+ person waiting list for emergency housing, a six-month program that places him or her in an AFC apartment. Wait time ranges from one day to six weeks, depending on a number of variables, including if a client on the waiting list can be contacted, if they return to the center, or if they decide to commit to the housing program.

“The goals with the emergency housing program are really to give people a place to stay so they’re not on the street and to stabilize them,” Siciliano states. The housing facility is open from 8 p.m. to 8 a.m.; residents are motivated to seek employment and pursue an education. At the end of the stay in emergency housing, if the client is deemed ready, he or she proceeds into transitional housing. Currently, with two transitional housing units and the prospect of another within the season, AFC can provide shelter for 10 LGBT youth transitioning into independent living. “They’re required to work full or part time or be working toward a degree,” Siciliano says of the transitional housing participants.

When speaking of certain homeless shelters, Siciliano says that “If you put [clients] off into a warehouse on the edge of a city, it creates this kind of pariah mentality.” As a response to warehouse-style accommodations, AFC has organized humane, family-like living environments for their clients, renting apartments throughout Manhattan and Brooklyn. The result, ideally, is a teenager’s assimilation into an environment that is more akin to a conventional living situation.

Many of the teens at AFC balance in the nebulous region between homelessness and sheltered. For many, homelessness comes about over a protracted period of time. Siciliano recognizes a trend among AFC’s clients, many whom faced homophobia at home. “A fair number of kids get pushed out when they’re 18. Homeless kids, when they get pushed out by their parents, don’t often end up on the street that day. A lot of times you go from friend’s house to friend’s house, doing ‘couch surfing.’ It takes a while before you end up on the street. That could be a process that takes a year or so.”

Sayquan, a 22 year-old aspiring media studies student/activist, currently resides at another shelter, Sylvia’s Place, but is a participant in AFC’s day center. “The foster home that I was actually being raised in was abusive,” she says about the events that led her from her home. Another client, Antwon, an aspiring dentist, comes from a different background. “When 19 came around my mother was like, ‘Okay there’s no room in this house anymore for you. I’m gonna try to respect as much of you as possible… I’m not kicking you out but there’s no room for you here.’ So, I had to find other options. I found the train, I found friends’ rooms, I found ex-boyfriends until I found a good place: Ali Forney.”

“One of the great strengths of homeless youth is that they don’t think of themselves as homeless. They just see themselves as people in a difficult situation. It hasn’t become their identity,” Siciliano says.

“When you think of a shelter you would never think of anything like this,” says Jay, a young college-enrolled playwright living in one of AFC’s Brooklyn emergency housing apartments. Alex agrees: “It in no way looks or feels like a shelter. It feels like I’m just in an apartment with roommates. You have your own personal space.”

Those who have found a home here marvel at the staggering numbers still unassisted. “I feel like not enough people know that we exist. I mean, there’s so many homeless gay kids it’s sickening. You would never know. There should be a hundred Ali Forneys,” Alex says.

“There’s loads of us,” Jay adds. Then, without a hint of irony given his circumstance, he shouts: “Being gay is the best thing that can ever happen to someone.”

Community Policing Is Not The Solution To Racist Police Violence

In the summer of 2014 an NYPD officer choked Eric Garner to death in an altercation that began because the officer suspected that Garner was selling loose cigarettes. Garner’s last words, “I can’t breathe,” were caught on a video that captured the attention of the country and, along with the police killing of Michael Brown in Ferguson, Missouri, catapulted the Black Lives Matter movement to the forefront of the nation’s attention.

Caroline Rothstein is an internationally touring writer, poet, performer, and educator. Her work has appeared in Cosmopolitan, Marie Claire, Narratively, The Guardian, BuzzFeed, NYLON, The Forward, Hey Alma, and elsewhere. Caroline and her work have been featured widely including in The New Yorker, MTV News, Chicago Tribune, CBS Evening News, Mic, and Newsweek. She is a Youth Mentor at Urban Word NYC and a facilitator for the Dialogue Arts Project. She performs poetry, speaks, and facilitates workshops and teaches year-round at colleges, universities, schools, summer camps, community organizations, and performance venues worldwide and virtually.