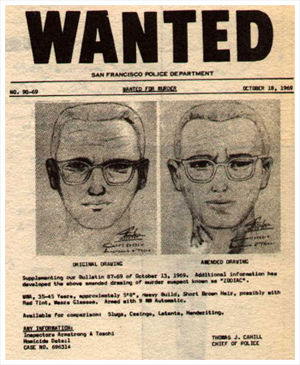 If there were as many serial killers in this country as there are movies about them, the USA would have a population the size of Ireland. Freddy’s slashing and Hannibal’s diet alone would take out a sizable chunk and I’m not even counting that lad from Saw. As far back as Fritz Lang’s M in 1931, moviegoers have had a fascination with the flesh and blood boogey man. Zodiac from David Fincher (Fight Club/Se7en) is one in a minority of real-life real psycho movies. Unlike the recent spate of serial killer movies, Zodiac revels not in the gore but in the hunt.

James Vanderbilt’s (The Rundown) script, from the true-crime books Zodiac and Zodiac Unmasked, by ex- San Francisco Chronicle cartoonist and amateur decoder Robert Graysmith (played by Jake Gyllenhaal), recounts the cultural obsession with, and investigation of, the killer who terrorized Northern California in the late 60s and early 70s. The self-titled Zodiac taunted police and the press with notes, cryptograms and phone calls, offering details of past crimes and promises of murders to come. Zodiac forced the San Francisco Chronicle and other Californian newspapers to print a series of ciphers by threatening more killings if they did not. The decision to print is still up for debate; publicity mattered to the killer as much as his kills. Zodiac shows the killer a little bit. Mostly, however, it follows four characters caught up in the long term investigation: Graysmith, the outsider cartoonist who enmeshes himself uninvited in the case, and lead detectives Toschi (Mark Ruffalo) and Armstrong (Anthony Edwards), and Paul Avery (Robert Downey Jr.), the San Francisco Chronicle newspaperman who received letters and death threats from the killer. Armstrong was threatened likely because he wrote that the killer was a latent homosexual, a move so memorable it was imitated in Michael Mann’s fictional Manhunter. Zodiac had five confirmed kills and claimed up to thirty more. As the failed investigation extends over the years, our heroes succumb to despondence, addiction and depression—as does the audience at times. But nobody can quite quit the Zodiac. He just won’t go away.

David Fincher started his career in advertising and music video, establishing a name in the 80s with work for Madonna, Aerosmith and Nine Inch Nails. Fincher was set the difficult task of making a commercially successful Alien III (1992), then the most expensive debut by a first time director. Stylized like MTV and bleak as hell, Alien III gained moderate financial success, but was hated by Alien fans and most critics. Fincher, who revels in sadism, had the gall to kill off Ripley and Newt (thank God for Hollywood resurrections). He returned to the world of music video where he garnered a Grammy for the Rolling Stones’ Love is Strong in 1994.

International success pounded on Fincher’s door in the form of Andrew Kevin Walker’s (Sleepy Hollow) ultra-noir serial killer screenplay Se7en in 1995. Visually experimental, with a tight narrative and a dream cast (Brad Pitt, Morgan Freeman, Kevin Spacey and Gwyneth. Paltrow), Se7en hit big and proved to be the definitive serial killer movie of the decade. Fincher’s The Game (1997) returned to the stylish mediocrity he seems most comfortable with —a psychological cat and mouse tale with Michael Douglas and Sean Penn. It’s pretty silly.

Panic Room doesn’t bear mentioning. Which brings us to Zodiac...

Serial killers: usually the killer’s back story is much harder to take than the violence. Hannibal Lecter, for instance kills only those he deems deserving or getting in his way. Silence of the Lambs sort of created a reason why its killer killed, but only half heartedly. Zodiac has the good sense not to bother with complex psychological justifications. The killer is represented as stocky, spectacle-wearing and average. He kills because he enjoys it and enjoys talking about it and that makes Zodiac (the guy all the time, the movie sometimes) really fucking scary.

Fincher, a childhood resident of San Francisco, lived there during the killer’s spree and recalls the fear and feel of the city during the period. Somewhat a project of passion, Fincher’s first film in five years is thoughtfully and accurately written and the cast is on their top form. Zodiac was shot on Viper HD, which utilizes ambient light for a more realistic effect. Fincher employs flat lighting, minimal camera movement and camera angles that focus on the dialogue and acting. He seeks a realism unseen in his other films. Fincher regards Zodiac not as a police procedural but rather as a newspaper film, citing as his influence All the President’s Men. The murder scenes are claustrophobic and intense and all too realistic (if there’s no extreme violence it couldn’t be Fincher). When Zodiac stabs his victims repeatedly you feel it; you also feel the frustration that drives the detectives and newspapermen as they come up with nothing. It is refreshing to watch a film filled with clues that lead nowhere.

But fuck it, I’m a style over content man and this picture’s almost 160 minutes long! How can you have a serial killer movie without flashy camera work, a car chase or at least a little baby shoot out? If I wanted flat, gray, slow and boring I’d watch Ozu. Even Panic Room, crap as it is, has cool opening credits. The murder scenes in Zodiac are eerie and tense, but how many visits to a handwriting expert can we bear in one film? I longed for a good old CSI swabbing or DNA-proven finale —no such luck. The influence of All the President’s Men is all too evident. The look is so similar that I expected Jason Robards to plop his arse down on a desk at any given moment.

At one point, the Zodiac killer questions when a good film will be made about him and who will star. This is not that film. Also, as a buddy of mine says “never show clips of a better movie in your movie”—especially not when it deals with the same subject matter. And Dirty Harry is a far better movie.