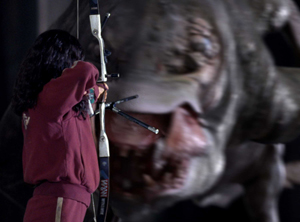 Everyone’s awesomely unrepressed in The Host, the masterful Korean monster movie by Joon-ho Bong. As soon as the mutant salamander villain slithers out from the river Han (beginning what will be his quick trip to gooey amphibian movie hall of fame), he takes great glee in chasing, swallowing, regurgitating, and licking the residents of Seoul. When oral gratification grows tiresome, the creature uses the citizenry as makeshift yo-yos. His great time is counterweighted by the immense pain the Park family expresses after seeing him suck up the feisty pre-teen light of the clan, Hyun-Seo.

At a vigil/press conference/mass funeral, the Parks argue, bawl, and then fight furiously, until the ferocious crush of cameras leaves them with nowhere to kick. Even more than the giant river creature who began eating everyone with no warning, the Park’s pre-biblical grief announces that this is a world that could only exist in the movies. A universe that is at once predictable, hyper dramatic, over determined, and revelatory in its conclusions. Conclusions which shed considerable light on the audience’s world: specifically, how family always enervates and international politics always breeds revolution.

In 2000, an employee of the US military (which has 37,000 personnel in South Korea) really did, for no clear reason, order his Korean worker to pour formaldehyde directly into the Han River. And the worker, for fear of losing his job, did. The Host re-enacts this event with the gory fidelity of America’s Most Wanted. Further, with self-righteous furor The Host asserts that the slime creature serves American interests. Anyone who had the misfortune to touch the creature and escape is soon threatened with a worse fate than experienced by those eaten whole. The American military decrees that Mr. Slimy carries a fatal virus that is now being quickly spread through the community by human hosts, most significantly the Park family. The virus doesn’t exist, but provides ample pre-texts for myriad nefarious schemes. The Army engenders mass panic by comparing the symptoms of the virus to the common cold. This makes it easy to both quarantine and invasively experiment on all those they deem carriers, and finally test a new biological weapon, Agent Yellow, in the center of Seoul. For once, a foreign horror movie does not metaphorize the U.S. into a monster. Instead it does a side-by-side atrocity comparison between America and the worst thing you can imagine. Guess who tips the scale?

Even if the Parks can manage to save little Hyun-Seo, they’re screwed. The family business, a small convenience kiosk in a picnic ground on the bank of the Han, delimits the physical and imaginative universe the Parks inhabit. As they watch Nam-il, Hyun-Seo’s aunt and role model, compete in the televized national archery finals, the Parks shout at the TV. The family says that Nam-il always runs out of time and loses the match. As they naysay, she’s indeed paralyzed with performance anxiety. Through the TV (and may I just say how taken I am with a culture wherein archery competitions are televised?), she is crushed by her family and by a country which fetishizes and then becomes threatened by a beautiful woman truly excelling. And which seems to have serious problems with women altogether.

All the other women alluded to in The Host have been not just diminished, but disappeared. The Host exists in a world without any maternal love, and those scars appear throughout the film in consistent and subtle ways. Nam-il’s brothers are even more stagnated than she. Their father’s a defeated shell who feels his death is bound to have more meaning than his life (though the ballsy director makes sure it doesn’t). The ever-drunk university educated son proclaims that he gave his youth fighting to democratize the country and got nothing back. Now he and his entire cohort are as capable with Molotov cocktails as they are cocktail parties, but they all prefer drunkenness to revolution. Hyun-Seo’s father (think Johnny Depp in What’s Eating Gilbert Grape, slightly older and with no chance of pulling chicks) suffers narcoleptic spells from childhood malnutrition. The human products of Korea are shown to be just as mutated as the slime monster the U.S midwifed—though the U.S. retains its monopoly on unmotivated cruelty.

Again reminding us that the U.S. is way behind on everything that really matters, including cell phone service, Hyun-Seo manages to makes a call to her helpless father from the Seoul sewers after being expelled from the belly of the beast. No one believes him. He’s dismissed as a hysteric and excoriated as a public menace, since he carries the much-feared virus. He escapes with his family and one by one they fail to save Hyun-Seo. Each is thwarted in disturbing slapstick humor scenes. Like most who undertake valiant efforts, the Parks come up against not unendurable pain, but bewildering farce. Once Hyun-Seo’s father is captured and prepped for vivisecting, the head doctor asks him why he hadn’t called the media or police and told them his daughter was alive and on the run in the sewer. He answers, “Because no one ever fucking listens to me” and begins to wail. The nurses on the scene (who haven’t yet caught on that there is no goddamned virus) interprets this as a sign of his virus-onset delirium. So accustomed to a world where there are no opportunities to affect minor change, let alone do the heroic, the nurses can’t even consider that maybe there’s a girl lost in a sewer who could use some help. Their whole world is one of defeatist masochism, as seen when slimy first appears. A hillside full of picnickers begins throwing fried food and beer cans at him.

Some of these idiots die quickly and some wait to die slowly. But some respond to the creature with the exuberance of those who’ve been looking for a tussle and had been fighting themselves, and among themselves, to pass the time. The fight gives them false hope, which spurs them into action. The same hope sends the Parks searching for Hyun-Seo. The monster distracts them from the boundless threats and sufferings they can’t beat back. American interventionism and Korean authoritarianism are both spectral presences in the film. When the showdown finally occurs against the monster everyone has been so afraid of, it happens under a cloud of yellow gas, released at the behest of the American and Korean governments. The substance is ghostly, cloying, and will be toxic for generations.

For all its hostility toward U.S. presence in Korea, The Host is deeply inspired by American culture (and already slated for an American remake). The director’s pacing and escape into farce recall the best of American monster myths, Jaws. The redemptive cycle and diabolical shifting from the micro to the macro reflects the mother of all false hope stories, The Grapes of Wrath. After Nam-il overcomes her hesitation and fires a flaming arrow through the eyeball (I hope) of the monster, what’s left of the family convenes along with an orphan boy. They’ve been stripped of their life savings, and though they still have the kiosk, it’s unlikely that ground zero for both monster and poison gas attacks is going to regain its day-trip popularity. Still, the new patriarch huddles, lovingly preparing rice for his new orphan, and turns away from the news, which, devoid of any anger, begins to explain how the virus panics were all a misunderstanding. The makeshift war-weary family, now inhabiting a post-apocalyptic landscape, have learned one more very western lesson. All you can do is tend your garden, even if its fruits are grotesquely mutated.

Mary Jo Bang is the author of seven collections of poems. She teaches at Washington University in St. Louis.

Karla Knight’s mysterious spaceships transport the viewer into other-worldly dimensions at a time when much of the art world can feel grounded by an ideological flat earth society. Like Hilma af Klint, whose works were channeled from higher masters in the astral plane, Knight’s remind us that art can originate from realms both mysterious and incomprehensible. Positivism, Adorno’s anti-occultism, and the “liberation” of art from its spiritual mission have dominated much recent discourse. When reading Knight’s statement—“I would say a visionary is someone who is a good listener, and a bridge between two worlds”—this critic wanted to applaud. Her works resonate and affect us deeply and draw the viewer into deeper meditations with their presence. Karla Knight’s art is pulled from the artist’s own psyche and lifts us into the fourth dimension where the spirit resides. It bucks many recent collective theoretical trends.

Intrusions into the Enchanter’s Domain

While a high school student, aged seventeen, at Liverpool High School in upstate New York, I made a linocut of Duchamp’s 1914 version of The Chocolate Grinder for an appreciative Ms. Houston, my fine arts teacher. I also managed to convince my long-haired, Metallica-loving host-brother Derrick to take me on a road trip to Philadelphia with his pickup truck.