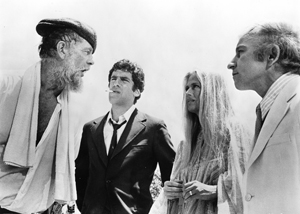 In Masashiro Shinoda’s 1964 film noir Pale Flower, his yakuza hero, Muraki, defines himself and the subculture of noir when he says, “I barely qualify as a human being, but I forgive myself.” It’s the noir version of Beckett’s “I can’t go on, I’ll go on.” Muraki may be barely human, but he’s human enough to absolve himself, and remain indifferent to everybody else.

In Robert Altman’s 1973 revisionist film noir masterpiece, The Long Goodbye, his private detective hero Phillip Marlowe inverts classic noir alienation. Faced with the greed, insanity, lust, vanity, self-delusion, lies, drunkenness, tripped-out-ed-ness, ineffectuality, ambition, murder, larceny and social climbing of others, Marlowe’s mantra is: “It’s okay with me.” Muraki avoids the world because he knows he’s scum; he’d participate if he thought he deserved to. Marlowe avoids the world because he knows it’s scum. Unlike every other noir protagonist, Marlowe does not experience self-loathing. It’s the world he loathes, and he knows that to participate means the loss of his soul. “It’s okay with me,” holds the world at bay.

As Peckinpah undid the Western with The Wild Bunch, Altman undid film noir. The noir hero would now suffer the double helix of modern consciousness: he knows everyone disguises their real intentions by the roles they take on. He refuses to. And thus appears inept, or out of his mind, to those further away from the truth of their souls and more connected to the insatiable I Want of Southern California in the early ’70’s. Accordingly, where classic noir used the voice-over to let the hero explain in rueful tones the complete mess he’s made of everything, Marlowe never speaks to the audience. Instead, as a solitary modern man does, Marlowe talks to himself. Like, constantly.

Marlowe wears 40s suits, drives an antique car and holds himself to an outdated moral code. Any man adhering to such a code, Altman contends, will experience dysfunction living and working in modern Los Angeles. Marlowe’s anachronistic personality operates as his moral salvation and as the root cause of his lack of success. The struggle between these two—personal morality and career striving—is a recurring Altman theme.

Altman called upon the living history of cinema – screenwriter Leigh Brackett – to adapt Raymond Chandler’s 1954 novel. Brackett’s first novel, published in 1944, so impressed Howard Hawks that he brought her in to co-write with William Faulkner the adaptation of Chandler’s The Big Sleep. (The plot of the finished film was so convoluted that, famously, not even Faulkner could explain what happened or why). Brackett also wrote science fiction, and contributed to the screenplay of The Empire Strikes Back in 1980. In between The Big Sleep and Empire, she wrote Rio Bravo and Hatari! for Hawks and a ton of television and cheap crap. Her rendition of The Long Goodbye is savage, but, like Phillip Marlowe, sincere. Brackett’s nasty humor matches Altman’s sardonic wit. Her brutal violence and close observation of men wallowing in male vanity gives the film its edge. Brackett’s Los Angeles—plastic and irredeemable—frames Altman’s fundamental contempt for the modern condition. In mood, pacing, understanding of the moral struggle, and, most importantly, understatement (a critical Chandler attribute) this is the finest adaptation of Chandler’s work. Never cynical, the film is weirdly uplifting.

Gould lays back remarkably in the face of some bravura performances. His Marlowe comes off as mildly astonished at the hysteria folks work themselves up to while maintaining denial. Foremost hysteric (in a manly way, of course) is noir icon and former leading man Sterling Hayden (Dr. Strangelove, The Asphalt Jungle, The Killing), here unrecognizable behind an enormous hippie beard. He plays a drunken writer who lurches between clue-dropping lucidity and glass-dropping intoxication. Altman’s own beachfront home, the scene of many a dropped glass, serves as the upper-class world Marlowe’s drawn into and wants no part of.

Altman’s camera, in the hands of his alter-ego Vilmos Zsigmond, narrates action and the psychological underpinnings of that action. The camera snakes around, searching and never lets us grow comfortable in one position; it’s a Cubist approach, wherein Altman shows us every view of every moment. Do you know how hard this is for a camera crew? Moving constantly, changing focus every second, letting actors stroll as they will and catching up to them? Visually, even more than McCabe & Mrs. Miller, The Long Goodbye is a high-wire jazz improvisation, where no matter how far afield the ideas are flung, the melody is never lost.

The restless, almost neurotic, camera becomes a metaphor for Marlowe’s quest, his and our confusion. It’s a reminder that a single mystery underlies this story and we are all looking for the solution. The motion also symbolizes the hopeless moral/personal confusion of every character. Their houses are built on sand, there is no safe place to stand, no one clear perspective from which to view the struggle.

Because the camera never stops moving, and because the story appears to shamble around (though it’s quite directed, purposeful and intentional), you might be left with an illusion of randomness. The story does an extraordinary job of mirroring Marlowe’s perception of the mystery (as Chandler’s books always do). In the beginning, when Marlowe’s baffled, the story moves quickly here, slowly there…as Marlowe’s sense of events grows clearer, the pace becomes more definite. No one thinks of Altman as a structuralist (no one thinks of Godard that way, either) because his films appear to be driven by emotion. But he remains an artist in total control of his material.

For all its satire and profundity, the film remains funny as hell, and showcases one of the wittiest uses of theme-song material in film history. The Long Goodbye features the only listenable or appropriate original music ever composed by John Williams. Listen closely for the theme’s rendition by a funeral band in a tiny Mexican town.

Twenty four years ago this film shattered every noir trope as it honored them all. Since so many films have subsumed its tone, The Long Goodbye no longer seems all that subversive. Its revolution has become canonical.

In her second solo exhibition at Hales Gallery, …to kiss a flower goodbye…, Ebony G. Patterson continues to explore the garden as a multilayered metaphor for the colonial histories embedded in the Caribbean landscape.