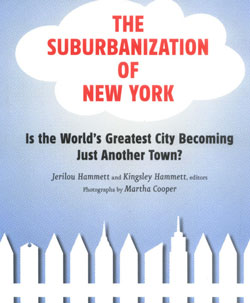 There is a certain morphology of New York narrative that finds its way mainly into magazines, the City section of the New York Times, and in conversation between old timers and relatively recent arrivals, that goes something like this: The best time ever to have lived in this city, and in this neighborhood more exactly, was the day I moved here. In stories of this type, there is usually a weird place on the corner where you can still get cheap beer, a crooked landlord, and some kind of violence lurking just below the window—_When I moved in there was still blood on the stairs from a stabbing the night before!_ The moral of these stories is that pretty much every day after that first one, this place has gone slowly and steadily to hell. Welcome to the fallen city.

Much of The Suburbanization of New York, an anthology intended to address the eponymous issue, is a compendium of stories of this type. This trip around the waterfront takes us to SoHo, the East Village, and Columbus Circle, when each story’s author was beautiful and carefree, the world was not as old as it is now, and just before every manner of fashion-obsessed freak and vulture of culture swooped in to take the choicest victuals or most spacious apartments for themselves. In an essay with the apocalyptic title “Extinction,” the author, a college junior at an Ivy League university, laments the loss of the Tribeca of yore, circa presumably 2002, and wonders aloud if “the banker and glitterati residents realize they are not only ruining the open and village-like environment of my youth by formalizing everything but also sabotaging themselves.”

Such trivialities are a shame, because the concept of suburbanization, and its vulgar cousin gentrification, are complex subjects not well served by reductive reasoning and journeys down the boulevards of nostalgia.

Some of the pieces in the collection do capture the complexity of the issues by turning an eye to the actual local conditions and political decisions that have altered the cityscape of New York. As the book’s editors, Jerilou and Kingsley Hammett, point out in the preface, as far back as the 80s Ed Koch proclaimed his desire to scrub Manhattan of its huddled masses. “We’re not catering to the poor anymore,” he said. “There are four other boroughs they can live in.”

In the late 70s, with the city reeling from its fiscal crisis and the smoke still visible from the riots in the Bronx and the landlord-inspired arson on the east side, middle class residents fled in droves. The city needed to lure them back, and it did so by trying to create that which they sought in the suburbs—safety, homogeneity, frozen yogurt. As Matthew Schuerman, a reporter for the New York Observer, explains in “The Rise of Real Estate and the Fall of the Industrial City,” successive administrations actively allowed the manufacturing core to be converted to residential apartments, allowing the city to slowly slip closer to becoming a bedroom community. Susan Fainstein, a professor of urban planning at Harvard, likewise shows how developers of retail malls built “an economic base that, as in the suburbs, excludes gritty industries, supports blandness, and promotes automobile dependence and retail homogeneity.”

The economic shifts came in reaction to global more than local circumstances. With the benefit of technology and freer trade, companies everywhere moved their jobs overseas if they could. Neo-liberalism shredded the remaining threads of the social safety net. As Robin D.G. Kelley perceptively argues in “Disappearing Acts,” an essay about Harlem, the Clinton era empowerment zones—although, like most prescriptions to cure urban ails, well-intentioned—ultimately devastated 125th Street, the heart of black America, by replacing local business that kept money in the area with global chains. In general, the transition from an industrial to a service economy has weakened the city’s working class. As Fainstein writes, “Residents are caught in a vicious circle: they cannot afford to patronize independent shopkeepers because their wages are so low, and their wages are so low because large corporations have been able to force down the general wage rate, justifying their stinginess as required by competition.”

As a concept, suburbanization is complicated terrain. Francis Morrone’s essay “Jaunty and Decorous” demonstrates that the first suburban incursion into the life of the metropolis was Central Park. The yearning for a little bit of green space to call one’s own is supposed to have beat in the breast of every American since Jefferson, and since we can’t all be members of the landed class, we at least need a place to wrestle and breathe. The suburbanization of New York then could more accurately be called the “America-zation” of New York. As Morrone says, America’s population is majority suburban, so if one were to include all those who live in New York but grew up in the suburbs, live in the suburbs but visit the city for work or play, and come here on vacation, the make-up of the island of Manhattan at any given moment is overwhelmingly suburban. As the nation politically fractures, aesthetically, and to a lesser degree culturally, its outlying cities are brought into the fold. And the reverse is also true—out in the heartland and the ’burbs, people sit in pre-fab lofts, sip Manhattans at the corner bistro, and shop either virtually or otherwise at Bloomingdales. The New York Times has higher subscription rates in many places than the hometown paper. That City section, available only in the five boroughs, may be our last local refuge.

It is worth remembering in this discussion how precarious the situation of cities has been. It wasn’t long ago that urban America was thought to be a failed concept, going the way of egg creams and the Third Avenue El. Many American cities—Newark, Baltimore, and Memphis come to mind—still haven’t shaken this yolk. Meanwhile, New York competes less with them than with Dubai, Shanghai, and London.

Within the cocooning safety of a squeegee-free city, it’s easy to long for the romance of ruined buildings, the desolate tawdriness of Times Square, and whatever quality your building on Orchard Street had before, as one contributor writes, “in moved two young white men who listen to loud indie-rock music” (shudder). While it’s relatively easy to preserve buildings, it’s harder to preserve the people inside them and their functions. The great thing about great cities is they don’t necessarily have to. Yes, New York should pro-actively encourage a diversified economy, mixed-income housing developments, and vibrant and open public spaces. It should also clean the streets and keep them safe, increase the tax base by keeping its affluent residents, and welcome newcomers from Mexico to India and beyond. It should remain a great giant stew of contradictions and conflicts and spectacles. That’s what New York has always been. Go to Times Square tonight, and see immigrant high school kids from Eastern Europe bask in the neon lights of Broadway, unconcerned about what they missed. Tonight, there is a punk rock show at a warehouse in Bushwick, a crowded 7 train brings the world across the East River, serenaded by a gospel trio that rumbles from car to car, and the whole huge machinery of this place magnificently rolls on.

New York City is too vast a universe, and too much an adaptive, resilient jumble of change and contradictions to turn into Great Neck or pause for wingeing reminiscences. Or, as Marshall Berman puts it in one of the most astute essays in the book, referring to the forces that want to blandify Times Square, “whoever is to blame, they’re bound to fail. The overflowing life on the ground today proves the hopelessness of the long crusade to kill the street. Times Square is a place where, in spite of everything, modern life goes on.”

Baltimore native David Freedlander is a writer now based in Greenpoint.

Chitra Ganesh: A City Will Share Her Secrets If You Know How to Ask