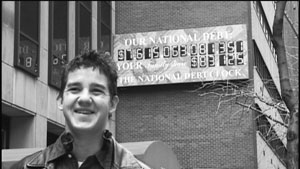 A New Yorker is shocked to hear the size of the national debt as it continues to rise just behind him. Still from In Debt We Trust.

If you’re like most Americans, when you hand that piece of plastic to the cashier and they say “credit or debit” you’re likely to answer with the “c” word, burying the consequences of that purchase in a special part of your brain to be dealt with at a later time. As the influence of older folks who look at credit cards with disdain and suspicion fades, credit and debt have become increasingly accepted as part of the American Way of Life. In fact, it is largely due to credit that most Americans can live a middle class lifestyle. Many people who consider themselves to be middle class and above—be it a blue collar factory worker in Ohio or a hipster freelancer in Brooklyn—would be downright poor if not for all the “generosity” of the credit industry.

Two recent docs, Danny Schechter’s In Debt We Trust: America Before the Bubble Bursts and James D. Scurlock’s Maxed Out, tell the true and miserable story of the credit industry in the US and how deep into debt both the country and its residents have become. While Schechter’s film takes a more personalized approach to the subject—he visits church services that collect money to pay members’ debts, desperate people who take out loans against their car titles, and grassroots activists working to educate people about credit—Scurlock’s film features grim stories of families who have suffered from suicide and desperation resulting from predatory lending and outlandish interest rates. A memorable scene in Maxed Out also shows a group of frat boy-like debt collectors, one who says that the game is to get someone in debt “far out on the plank but then come back at the last minute and pay.” Both films also examine how major credit card companies helped design the deftly named Bankruptcy Abuse Prevention and Consumer Protection Act of 2005 and how it was essentially written by MBNA, one of the largest credit card companies and a major supporter of the Bush administration.

The issues these films bring up also come at a time when credit and mortgage companies are starting to feel the sting of their short-term profitable strategies of “subprime” lending—loans at very high interest, mostly through mortgages, to people that are already in debt or have bad credit. Subprime lending, though, is only another manifestation of an industry that understands that issuing credit is absurdly profitable, especially when it’s given to people who can’t afford it. Some of the most powerful points that emerge from these films have to do with just that: the lack of responsibility that credit issuers take for some of their tactics and the dire consequences, in real human terms, of the strategies that have come to be common in issuing credit.

Some of the statistics presented in the films are astounding as well. For example:

The average American low and middle income household has nearly $9000 in credit card debt and pays $1300 a year to credit card companies in interest.

Americans owe over $2 trillion in total consumer debt while there is over $1 trillion in approved credit that is currently unused.

According to the Commerce Department, the personal savings rate for 2006 was negative one percent, the worst showing in 73 years.

Credit card debt has tripled since the 1990s and credit card issuers have increased the number of credit card offerings by six-fold since 1990.

Some of the most telling insights in the films are ones that, on the surface, would seem counterintuitive. For example, it turns out that having people in debt is so profitable for the credit card companies that, even when all the increasing bankruptcies and foreclosures are factored in, they are still making massive profits off of people, mostly through interest rates and fees that can double and even triple the amount owed. Maxed Out tells the story of a woman who hid from her family the fact that she owed $15,000 and that, when she disappeared and creditors tracked her family down, the amount had turned into over $40,000 through penalties, fees and rising interest rates. The woman, as it turns out, committed suicide by driving her car into a river.

Another revelation is that credit card companies actually find that those with the worst credit histories make the best and most profitable credit card customers. This is especially true with people who have declared bankruptcy. They can’t do so again, and they have a “taste” for credit. They will go into debt and pay only the minimums, potentially for their entire lives—a surefire money maker for the credit card companies. Getting people hooked on credit debt while they’re young is also another tactic. It’s a familiar sight on college campuses to see tables from Citibank offering free t-shirts if students apply for a credit card. In Debt We Trust features an activist named Robert Manning, who gives lectures on the college circuit about the dangers of credit cards. Maxed Out illustrates this danger by using the cases of two college students who were easily issued credit beyond their means, ran up huge balances, and ended up hanging themselves.

Furthermore, debt has become so profitable, be it from mortgages or credit cards, that trading debt has become the fast growing sector of Wall Street. In other words, credit debt—because it makes so much money through fees and interest to those it is owed to—is a commodity in itself. These films analyze the larger implications for the future of America. In Debt We Trust takes the wider view of showing how the US has essentially moved from a producing economy to one based on consumption. Credit is the indispensable backbone of our current economy as well as a form of “modern serfdom.”

Both films show how usury has now become the norm in contemporary American life. From “payday” loans to returning soldiers—a high-interest loan based on the next paycheck, which balloons exponentially if it isn’t paid on time—to the “instant tax refunds” offered by credit industry-connected chains like H & R Block, where you can get the money up front at a huge price.

As the films illuminate, the biggest problem for consumers is the fact that most people know little about how credit entities work, even though these companies know a lot about us. They amass huge databases about every one of us, using creations like FICO scores and credit ratings to put each of us in categories. Essentially, the credit industry has created as indispensable profiling mechanisms. Meanwhile, not owning a credit card severely limits a person’s mobility and raises instant suspicions about his or her background.

Of course, the promotion of credit fits in nicely with the dreams of consumption we all presumably share. Look at the images that accompany ads for credit cars and other loans—images of spending, families on vacation, etc.—and you’ll see the “freedom” to do all the things that the American Dream promises. At the same time, the American bootstraps ethos of “personal responsibility” works in the favor of the credit industry, because most if not all debtors feel both guilty and obliged to pay the companies that are screwing them over. Both In Debt We Trust and Maxed Out make the point that the credit industry should hardly get a pass in this crisis. Preying on the needy and vulnerable for profit is immoral and often criminal.

So as the 0% credit card offers and seemingly comforting proposals for liquidity come through your door you might want to remember that, while they might be sustaining your middle class lifestyle, they’re hardly doing you a favor. The lie-in-wait predators are simply waiting patiently for you to make that one slip that will take you deeper in the hole.

Warren Neidich: The Brain Without Organs: An Aporia of Care

At the Museum of Neon Art, The Brain Without Organs: An Aporia of Care, takes a radically deconstructive approach to the brain as a material organ and as an emblem of human intellect, the source of our unique evolutionary advantage.