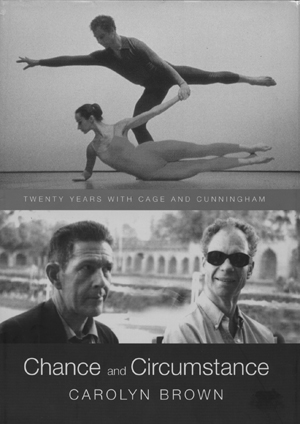 A night at Black Mountain College, a summer night, in 1952: artists gather in the school’s cafeteria for an evening of theater. For Carolyn Brown and her husband in New York, “Black Mountain meant nothing more to Earle and me than some place where David [Tudor] would be…thereby enabling us to use his vacant flat.” David is playing piano; while Cage and Olson sit on ladders, each speaking in dialectical blends of lecture or poetry interspersed with silence. Rauschenberg plays records on a wind-up phonograph; his White Paintings hang from the ceiling; and a barefooted Cunningham, followed down the aisle by a barking dog, dances with the audience.

Chance and Circumstance written over the course of three decades since Brown’s last performance with the Merce Cunningham Dance Company, after their world-tour in 1972, Chance and Circumstance moves outside the conventions of memoir. Brown relates the everyday dynamics of life with the composer John Cage and choreographer Merce Cunningham, but also provides a staggeringly thorough realization of the verifying concepts behind the two artists’ work. With the chronology overlapping from chapter to chapter, Brown’s personal account of the mid-century revolution in American Art is a free sequence combining insight, critical reference, and anecdote into an intimate and authoritative history.

After moving to downtown Manhattan in the Fall of ’52, Brown recounts walking along 8th Street amid the “heady air of revolution” surrounding Cage, Cunningham, and their contemporaries. Amidst practicing, rehearsing, taking dance lessons (even though she was broke), living in cold-water-flats, sneaking into movie theaters to see films for free, Brown asserts that “In the sixties there was much talk about ‘beating the system,’ operating underground. Painters, composers, poets, and dancers in the early fifties didn’t talk about it, they simply did it.” After her first few months in New York, Cage invites her to spend the summer of ‘53 at Black Mountain College, the “freewheeling experiment in education, a jumble of heterogeneous cottages and buildings hidden away in the backwoods of North Carolina, deliberately out of touch with society and culture,” where she begins her training with Cunningham and becomes a part of the dance company as it grows through its formative years.

Brown recalls that Cage’s musical concepts were visible in aspects of his everyday life. He immersed himself in the methods of expression that would form the basis of his and Cunningham’s art: the use of chance to circumvent the ego, Eastern Philosophies of sensation “on all levels at once,” the abandonment of control to “let sounds be themselves,” the concept of rhythm as an empty structure to be filled and a process that draws together opposites. He projected his ideals through his music as much as his daily manner, like his “wildly utopian conversation.” Ms. Brown recalls how, on the road during a West Coast Tour, Cage liked to entertain the company after dinner with a kind of improvised puppet theater: “onstage would be an object—a shoe, perhaps. Curtain down. Curtain up. Shoe gone. In it’s place, a rumpled handkerchief. Curtain down. On and on he’d go, juxtaposing ordinary objects…until he had his audience collapsed on the floor, groaning with laughter.”

Cunningham used chance in the initial part of his choreographic process, though unlike Cage, he wanted to maintain a certain control over his actions. “For Cunningham, the dancer’s floor is literally the dancer’s floor. He wants to move because he wants to move.” He had a similar devotion to Eastern Philosophy, with the idea of “permanent emotions,” on which he would rely throughout his career: “If it is there, we do not need to pretend that we have to put it there.” Next to Cage, Cunningham is depicted as a performer of striking practicality. When an interviewer approaches him after a performance of Suite by Chance, asking if he felt it to be an abstract dance, Cunningham replied that he did not see how humans could be abstract. Brown mentions Cunningham’s interest in the movement of pedestrians, as he would watch from his loft above Sheridan Square, observing the “haphazard confluence of individuals crisscrossing” as it reflected his “absolute concentration on each single moment, as though the movements were …”

Audiences were confounded, along with many American critics, that as Brown remembers, “simply failed to realize that a new language was being spoken.” After a performance of the piece Minutiae at BAM in 1954, (for which Robert Rauschenberg designed the sets for the dancers to move through and around.) long-time director of the Denishawn company Louis Horst balked at what he viewed to be “noisy and tasteless sound…Dadaistic and incomprehensible” while he couldn’t help but acknowledge Cunningham’s agility. Brown remembers his reaction as “no! to Merce the choreographer, yes! to Merce the dancer.” Upon traveling to Europe, foreign composers and critics alike praised the group. After a concert at Darmstadt, Cage’s performance “sparked crazy, improbable theories of composition.” Though there continued to be no critical breakthrough in America for some time, Brown cites the exceptions. One critic for a small Sunday journal wrote after a show in Providence: “Cunningham does not want us to identify with anyone or anything happening on stage. They want to shock us into an awareness of reality.”

Hired to help with another performance, Suite for Five, Rauschenberg had the idea for a smoking ball to be tossed back and forth by the dancers. This worked fine, until it dropped onto the dance floor, and rolled off the stage into the audience. “It’s too bad,” Brown writes, “It was a striking image…of course it upstaged the choreography…something Bob was adept at doing.” Brown recounts the morning when Rauschenberg woke up in his loft on Pearl St. eager to paint, but with no prepared canvas at hand, he rushed to paint on the only immediately available surface: his bed. Brown later quotes his phrase “Raw material can be served up raw.” It is this raw simultaneity running to the book’s end that Brown reveals in Cunningham’s dances and Cage’s compositions, as she quotes choreographer Frederick Ashton, “the purity of the dance expressing nothing but itself…expressing a thousand degrees and facets of poetry and movement.” The works of these two artists’ lives verify that the senses are there and must remain active. In Cage’s words, the work is “not an attempt to bring order out of chaos nor to suggest improvements in creation, but simply a way of waking up to the very life we’re living which is so excellent once one gets one’s mind and one’s ideas out of its way and lets it act of its own accord.”

Mary Heilmann’s The All Night Movie

This book shows how connected many of her paintings are to specific moments, people, and places in her life. She uses words and images to trace her life from her early years in California to her arrival at artistic maturity in New York in the early 1990s.