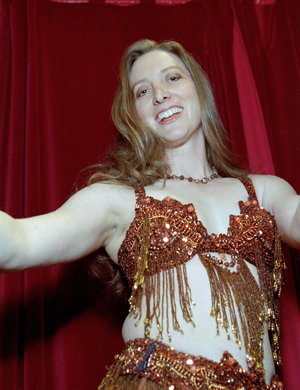 I had only been belly dancing for six months when my classmates goaded me to don a stage name and enter the wilds of public performance. I didn’t see my bespectacled self finding fulfillment in what history has maligned as an exotic dance. But eventually my curiosity overruled, and I began to seek out the appropriate venue to safely strut my stuff.

Opportunity knocked one Saturday afternoon when recruiters from a charity organization visited our class and encouraged us to audition for their company. Volunteering as a Compassionate Camel, a troupe whose mission was to bring the art of belly dance to New York seniors, appealed to my do-gooder enthusiasm. Here was a nice low-key way for me to road test my burgeoning desire to perform.

Shortly after getting cast, our leader, Damascus, called a company meeting. She reached into her briefcase and pulled out a framed picture of herself shaking hands with Rudolph Giuliani. “Last year we were given an honor for our service to the city of New York,” she declared, “But this year, I want more.” She wrapped her platinum hair into a bun and steadied it with a chopstick. “I want,” she said emphatically,“to be big.”

Our next performance was to take place at the Promenade, a ritzy senior living facility on the Upper West Side. What started as a cute homage to I Dream of Jeannie morphed into an epic plea for peace in Middle East. Rabab, our choreographer, was highly imaginative, but had extreme difficulty communicating her ideas. Rehearsals boiled down to a series of commands called out to Amr Diab’s song, “Wala Ala Balou.”

“I thought you said I was a blossoming flower?”

“You are,” she said, “And your sweet-smelling linens are creating a sense of calm before the storm.”

Never mind that we’d staged a war dance to a love song. When we arrived at the Promenade, Damascus gathered the Camels into a huddle, her voice thick with disappointment. “It seems that we are not going to be performing in the Ballroom after all. We’ve been assigned,” she said, choked up, “to the 7th floor.”

We piled into the elevator manned by a cheerful attendant who explained that the 7th floor was an Alzheimer’s ward. “They’re going to love you,” she assured us as she locked us in.

Damascus and Simon went to the lounge to set up the music and props. With four musicians, their instruments, and the audience, there was hardly any room for the dancers. At the last minute, the band was relocated. “We’ve been exiled,” Simon said congenially, “to the hall.” There was a blackboard behind him with two statements in bold lettering: “Today is Sunday,” and “The weather is hot.” Leylah slipped in behind him and sketched a line drawing of a belly dancer. Rabab’s bird-like arms fluttered nervously, “worried for her girls.”

“Ladies and Gentlemen,” Damascus said, clutching her shivering crib sheet, “I’d like to bring you the Compassionate Camels. We are here to delight and amaze you…” The band led off with “Kashmir” by Led Zeppelin—this was the only “Middle Eastern” song in their repertoire. We entered undulating our hips and shaking tambourines to rouse the sleeping residents. One woman cried out, “This sex dance is disgusting.” She would have stormed out, but the attendants had confiscated her walker.

I gazed over the room and my eyes settled on one woman who seemed particularly alert. She kept mouthing something to me but I couldn’t understand. Rabab circled the Camels in toe shoes. This was our cue to interact with the audience. The residents were either chair-bound or asleep but some seemed happy to have us come near and smile at them. I wended my way back to the inaudible woman and lowered my ear to her mouth. “You’re beautiful. You’re beautiful,” she whispered. I felt flattered and deeply sad.

Our next number was “Wala Ala Balou.” Our formation was difficult to fit into the center of the room. Leylah’s veil was so close to one of the residents that he reached out and wrested it from her. “Dr. Thompson sure likes you,” his attendant said, staring at her cleavage. Leylah was very gracious, but Dr. Thompson wouldn’t let go. He seemed to enjoy the tug-o-war, pulling Leylah so strongly that she tumbled into his lap.

The violins lofted melodiously and then broke into silence. Rabab prepared to detonate the “bomb.” She took aim and tossed it as hard as she could but the ball of socks with crepe paper streamers didn’t have enough weight to make it all the way into the circle. She accidentally hit a resident who had to be escorted from the room.

In the midst of the melee, Cala and I ran off stage. We changed into our harem pants and grabbed our swords—or what we would use for swords—two 1’ 3/4” dowel rods. We tried to execute the choreography, but at first sword clash, Cala’s dowel cracked and splintered her hands. In the spirit of the dance, we both dropped our weapons and began to fistfight, hoping that other dancers would sweep in and come to our aid. None did. One of the residents turned to her friend and whispered loudly, “I hope the fat one wins.”

At the end of the battle, the rest of the Camels swooped in for a reunion. “Thanks, a lot,” I whispered to Leylah who pursed her lips to keep from laughing. We joined hands and began a kick line, which generated a few happy sounding yelps from the audience.

An attendant started to clap with the music. We broke out of the line and began to improvise, doing our best to engage the residents. I looked around the room and noticed that all but one person were awake. “Mr. Peterson, Mr. Peterson, you’ve got a surprise,” an attendant said enthusiastically. She called his name and nudged his arm. “Mr. Peterson, Mr. Peterson, you don’t want to miss this!” When he didn’t respond, she grabbed him by the shoulders and started shaking him. Mr. Peterson finally opened his eyes and a beatific smile crossed his face. He was happy and so was I. Damascus came back out on stage. “Our next number is going to be presented by the lovely and talented Cala. Ladies, and gentlemen, please give a warm welcome to Cala.” The drums rolled and Cala hefted her large frame onto the stage. She was the only one brave enough to dance to live music. As the first notes left the keyboard, Cala was shocked to find herself, an African-American woman, belly dancing to “Hava Nagilah.”

Not to be outdone, Rabab took off her toe shoes and insisted that she, too, would dance with the band. They were thrilled and surprised her with an original arrangement of Johnny Cash’s “Ring of Fire.”

When it was finally my turn, Damascus returned to the stage to introduce me, “Please give a warm welcome to our very own fairy princess, our last dancer, Jenan.” She put my CD in the player, and I began to dance to classical Egyptian music. I was a little bit nervous to start with and so I tried to make eye contact with as many of the residents as I could. A lively gentleman called out, “I am from Turkey.”

“Are you enjoying the dance?” I said.

He took a deep breath, filling his hollowed chest and placed his hand on his heart. “Always,” he said, “Always…”

At the end of the show, the band fired up their reprise of “Kashmir.”

“Ladies and Gentlemen,” Damascus said in her nervous cadence, “We must go now. Our show is over. We are very sad to leave you and want you to know that we enjoyed being in your company.”

We all returned to the stage as Rabab exclaimed, “I knew my girls could do it!”

An attendant brought us glasses of water and said that she had never seen the residents respond so positively. Somehow the trials of the last five months faded. I had done what I set out to do. Performing for seniors was not at all what I imagined, but it felt pretty good.

After many minutes Damascus joined us, flushed and excited. “They want us back,” she said.

For my taste, I was glad to be a Camel, and happier still that we debuted for an audience that really needed us. With some hard work and dedication, I was confident we could set our sights on the Ballroom.

Since her stint with the Compassionate Camels, Jenan is now a professional belly dancer and teacher performing with the troupe Amarain.

Cosmic Dancer, curated by Florence Ostende at the Barbican Centre in London (with which his eponymous dance company is partnered as an artistic associate) is the first in-depth exploration of Clark’s work. By foregrounding materials like films, interviews, sets, and costumes, Cosmic Dancer provides an opportunity to survey Clark’s career-to-date through the lens of its documentation.

Hebel translates to vanity, emptiness, vapor, breath, absurdity, or fleetingness, among many other possible definitions. Murdered by his brother, Abel becomes the embodiment of the absence he’s named for. With no motive given, we are forced to fill in that narrative gap ourselves, to make sense of the senseless.