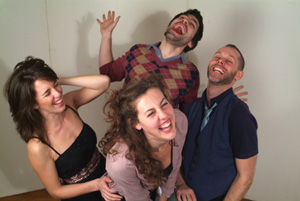 What excites me about the dance company everything smaller is just about everything: their collaborative work, their athleticism, their art, and their dedication. The company’s latest piece, Building It Up and Breaking It Down performed at Triskelion Arts in March, is the first piece I have seen in a long time, choreographed by a newer company, that isn’t trying to be something it is not. It was perhaps the most honest work I’ve experienced recently. Not because they bared their souls on stage, confessing personal details, but more simply they had a great time. There was no ego or contrived effort to seem deep—too many young choreographers think a piece needs to have these elements. Instead, proving this theory wrong, Building it Up and Breaking it Down had a much more important element: substance.

The piece captures the role of games in the lives of children and adults. Two tiny kid’s chairs, one in orange and one in blue, aptly set the scene. Donnell Turner and John Peery bring us back to our childhood with soft voices and playful faces. “I once put 22 bouillon cubes in my mouth at one time,” Turner says, and Peery stuffs Turner’s face with marshmallows. They wrestle to the ground, strike a pose mouth-to-mouth, and rotate like a scene in the Matrix, highlighting the three-dimensional angles of the fight—a comic element that lends depth and new perspective to the light-hearted fun facing us. Jessica Jolly and David Schmidt’s presence upstage in dim lighting brings a serious undertone to what’s staged before them. Their eventual forward movement, athletic, low to the ground and aggressive, mimics an adult game rather than a child’s.

Games of musical chairs and conversation replays intersperse with fight-like stances and repeated circles on the ground. The company successfully manages to meld theater with dance by incorporating collaborative physical interactions that pack in as much emotion as they do physicality. One performer tries to talk to another who ignores her by doing handstands or looking around. Their movement becomes a conversation and choreographed from partnered improvisation, it is the physical embodiment of trust. Their partnering incorporates lifts, holds, lunges, leaps, windmills and falls into each other and through each other. It is contact improvisation taken to its ultimate choreographic peak. Their athleticism calls upon images of Dorfman and other dance artists who push the body to extreme limits. What’s different and delightful is that this group has unique phrasing and vision. Their bodies work well together, as does their collaborative invention. Watching their movement is like watching confetti fly and unfold in the wind.

A rough physical section in the middle of “Building it Up” ends in a poignant mock-up of a family portrait. The dancers start singing an off key and overdramatic version of “Not a Rose for Emily” which leads into a reinterpreted scene from “Sex and the City.” The piece climaxes in power struggles and competition amongst the dancers. Their kaleidoscope of wide-reaching movements is mirrored by a brilliant sound wash.

The games they play, the relationships they test in hugs, kisses, falls, and fights are brought to a peak when in the end one dancer becomes the subject of everyone else’s kisses. Then the love is shared as they kiss and touch another dancer, rotating through the group. In what I thought was an odd attempt at being cute, the company promised that I’d leave the piece “feeling tenderly kissed.” To my delight, I found that, quite frankly, it was true.