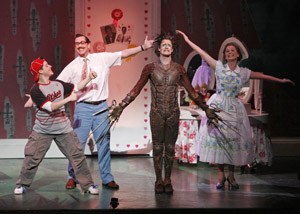 The open pastures of performance are becoming a landscape strewn with celluloid. The advances and influence of media in general, and cinema in particular, have pointed out that dance, theater, and performance art are all situated over a geological fault line, and Hollywood is seeping through the fissures in the bedrock. The cartographers are furiously redrawing a new map, while the scientists are baffled but entertained.

Two productions this past month bring into focus the relationship between live art and cinema: Miranda July’s THINGS WE DON’T UNDERSTAND AND DEFINITELY ARE NOT GOING TO TALK ABOUT, which played at The Kitchen March 1-3, and Matthew Bourne’s Edward Scissorhands, which opened March 14 at the BAM Howard Gilman Opera House. These productions are two sides of the same coin—one is a performance preparing to be adapted into a film, the other was a film that has now been adapted into a performance.

Matthew Bourne’s Edward Scissorhands is a dance-theater re-imagining of Tim Burton’s 1990 film of the same name. In this gothic fairy-tale, an unfinished Frankensteinian boy (Edward), with only scissors for hands, infiltrates the cookie-cutter community of Hope Springs. The townspeople, who are as artificial as Poptart breakfasts and microwaveable dinners, treat Edward with initial curiosity, then acceptance, then indifference, then outright hate—eventually chasing him out of town and killing him. Tim Burton’s original story served as a biting social critique/autobiography—the dark outsider-artist (Burton) slicing his way through a fake, plastic town (Hollywood). Bourne’s production can only maraud Burton’s graveyard, stealing just the bodily shell, not the spirit or commentary.

Bourne presents an Edward that is pure, dazzling spectacle. The show features a ballet of dancing topiaries, extravagant group sequences filled with individuality and character, and a snow shower above the audience. It’s slick and sharp and more “Hollywood” than the film version. Visual storytelling is Bourne’s ace-in-the-hole, but choreographed authenticity is not his strong suit. The show continually falls short because of lack of depth. The final duet with Edward and his love, Kim, is only pretty movement and never emotionally moving. The two barely embrace—and this is because of Bourne’s lack of infused passion, not because of Edward’s lack of hands. Bourne gives Edward many attributes—brains, beauty, charisma, and even dancing feet. But, like Edward the character, it’s missing only one thing. In this case, it’s not a pair of hands. Bourne’s Edward Scissorhands is missing a beating heart.

On the other hand, Miranda July’s THINGS WE DON’T UNDERSTAND… is nothing but heart. July promotes her latest performance piece as being “a tale of heartbreak and obsession so familiar you could tell it yourself.” In fact, she utilizes a real-life couple from the audience to help advance her own narrative, while also revealing their personal stories—things like where and when they met, their pet names for each other, and sleeping positions. July weaves these people and their history into her tale of a couple, Fiona and Donny, who deal with the possibility of losing each other when Fiona falls for another man. This narrative is inter-cut with a projected video starring a puppet cat with a broken paw trying to find its way home.

July’s production employs a multitude of media including pre-recorded and live-feed video, music, and old-fashioned yarn-spinning. It also includes intermittent instructions to the audience projected onto a screen, telling them when to clap, laugh, speak, and stomp their feet at signature moments throughout the piece. The show is as interactive as it is authentic. What makes the piece work is July herself. She is like a broken flower scotch-taped together, sitting in a dime-store vase of dusty water—easily unnoticeable and easily the brightest and most beautiful thing in the room. Her performance style is understated, open, and delicately honest. Wearing an awkward pair of old orthopedic sneakers, small Bermuda shorts, and a tiny striped polo, she reveals a persona so familiar that we may be afraid to admit it is real.

THINGS WE DON’T UNDERSTAND… will not stay a performance piece for long. July will be using it as fodder to make her second feature film—a follow-up to her 2005, critical sensation, Me and You and Everyone We Know. The obvious question is how can she fulfill the expectations of Hollywood, her new hometown, with material so unexpectedly intimate, quirky, and uncinematic? The more looming question is will her future performance work be nothing more than a producer’s ploy to have people pay to see a movie star live? This is almost surely akin to the paradigm with which Matthew Bourne’s Edward Scissorhands operates. In which case, we can only ever view what’s on stage in reference to our cinema-sensitive experience. If this persists, live art may be dead art.