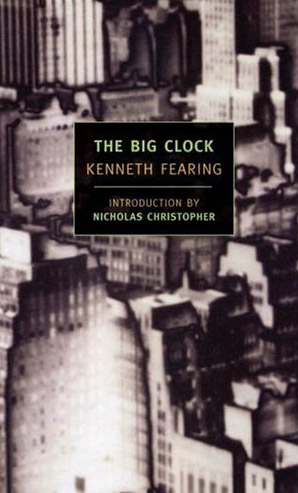 In these times, we are constantly assaulted with news so monotonously predictable that it cannot possibly be true. The war goes on. Corruption rules. The economy teeters. The problem with news, as Walter Benjamin says in ‘The Storyteller’, is that “the value of information does not survive the moment when it was new.” The news story lives and dies by its dateline, even if these days it ekes out the half-life of the undead on the blogs. The story, Benjamin thought, was a lost art, and that may be. But perhaps one form in which it survives is in news. No longer able to resist the news economy, the story subsists within it, and against it. Kenneth Fearing was a hack journalist of one kind or another for most of his working life, and his novels—two of which have just been reissued—are saturated in the spurious facticity of the newsworthy anecdote.

There is a famous anecdote about Fearing that, however newsworthy it once was, makes for a perfect illustration of Benjamin’s idea of the inexhaustible story. During the Red-baiting years of the 50s, the FBI rounded up Fearing and asked him the inevitable question: “Are you a member of the Communist Party?” His answer: “Not yet.”

The world of Fearing’s writings is a New York street on which a woman in heels passes a man in a trench coat. The sun gleams off a polished office window, and each just misses stepping in a pile of dog shit. They will meet later over cocktails. What interests Fearing is neither the man nor the woman but what passes between them, a kind of subjectivity that is always between bodies, buildings, media. In Fearing’s world, a bar can have personality, an institution can have qualities, a multitude can have affect, but a person is not much more than a name with a job and bank statement.

Fearing is acknowledged as a minor poet, but something holds his writing back from recognition as “literature.” I don’t want to make a case for him as “literature.” The anti-literary quality of his writings, particularly the novels, is actually what is best about them. Fearing is always deviating from the literary. He is too “political,” but at the same time too pulpy. His characters are never “rounded,” but at the same time the subjectivity at work is too nuanced. His language lacks style, and yet his very perfection of the commercial-writing idiom of the 40s is itself an art.

The Big Clock is Fearing’s most successful novel, commercially and aesthetically. Published in 1946, it was made into a not-bad B-picture, staring Ray Milland. (The money from it should have set Fearing up for life, but of course he drank it away.) It’s a crime story, but more surreal than hard-boiled. The two key figures in it are the Big Clock, of the title, and Gil’s Bar, which is its antithesis. The spaces and characters all array themselves in actual and spiritual proximity to one pole or the other.

The Big Clock is Fearing’s term for the society of the spectacle. It’s a machine for grinding out life in equal and exchangeable units. “It measures people the same way it measures money, and the growth of trees, the lifespan of mosquitoes and morals, the advance of time.” Fearing’s characters are all caught up in its gears and wheels. Underneath the crime caper lies this other story, about being co-opted by the Big Clock, and what kind of play might remain between its cogs:

“The super-clock would go on forever, it was too massive to be stopped. But it had no brains, and I did. I could escape from it.”

Gil’s Bar is everything the Big Clock is not. It is an ill-lit, not to mention illicit, dive. Behind the bar Gil keeps a grand array of junk. Patrons challenge Gil to produce an item that they imagine he could not possibly have. Gil invariably produces it, and the patron stands Gil a drink while he tells the story of how he came to possess it. Whereas the Big Clock values everything every instant and discards everything every instant for something new, Gil’s junk heap operates on a different principle. Everything remains in the junk heap to be valued again and again, in yet one more of Gil’s anecdotes without end.

In The Big Clock, characters who are close to the orbit of Gil’s Bar are marked by their openness to art, alcohol and sexual variety. Characters close to the Big Clock instinctively close themselves off (although, this being America in the 40s, everybody drinks). The central character is the one most evenly divided between the two. As he writes in the novel Clark Gifford’s Body:

“He is a man of two consciences, that of an old fashioned idealist and that of what he would call a practical man, a smart guy. Two consciences, and he is always in bed with both of them, and always hurt. He can never go far enough away.”

This can be read, of course, as the predicament of Fearing himself, and it is another version of his “not yet” answer to the call of the Party. He can’t quite bring himself to believe. He can’t quite believe in art or literature, or politics, but he can’t believe in the dominant ideology either. He becomes the precursor to what Peter Sloterdijk will call “cynical reason,” what for Slavoj Zizek is now the very principle of ideology. We don’t believe in the shibboleths of late capitalism, yet we can’t bring ourselves to believe in anything else. So we act as if we believed. Free market, free cell phone, free minutes, whatever.

A character in The Big Clock remarks:

Judas must have been a born conformist, a naturally common-sense, rubber-stamp sort of fellow who rose far above himself when he became involved with a group of people who were hardly in society, let alone a profitable business.

Guy Debord once wrote that the goal of the integrated spectacle is to turn revolutionaries into secret agents and secret agents into revolutionaries. This is the world Fearing is already describing. Clark Gifford’s Body was published in 1942, and perhaps not surpisingly its vision of a failed revolution and traitorous agency in the midst of endless, total war was not popular at the time. But perhaps we have finally arrived at the point where the book can be read less as dystopian futuristic fiction and more as a story about what’s on the news.

McKenzie Wark is the author, most recently, of General Intellects (Verso 2017). They teach at Eugene Lang College.

Over the course of nine consecutive days in 2005, an artist stages performances at nine different sites around the city. At each location she holds up a handmade protest sign, usually carrying a slogan from a past protest, though her intention is not to re-create historic events. Instead, she freely transposes slogans and sites.