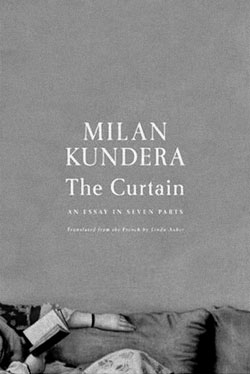 “To bring together the extreme gravity of the question and the extreme lightness of the form—that has always been my ambition.” —M.K

In the early 1960’s Milan Kundera, a recent émigré from Czechoslovakia living as an exiled intellectual in Paris, discovers first hand the inescapable tidal force literature exerts over national consciousness and personal identity. During a conversation with a French acquaintance he is eager not to let his account of life in Prague under Soviet surveillance dip into the syrupy sweet “aesthetic evil” of kitsch. As the dominant style in the 19th century, kitsch was understood by Central Europeans as the tyranny of over-blown Romanticism. Kundera describes an episode that could be found in one of his novels: an apartment swap with a womanizing friend that befuddles the Soviet spies as well as the friend’s multiple lovers. The ensuing icy response to the light treatment of a heavy subject is chalked up to the Frenchman’s own distaste for the vulgar, his nation’s equivalent of kitsch. The two men are held apart not by their respective native languages, but by a cultural barrier that is deeply engrained within their national literary consciousness. As an antidote to this story of national differences Kundera describes a memorable encounter with Latin American writers, Gabriel García Márquez, Carlos Fuentes, and Julio Cortázar, when the trio visited Prague in the early days of the Russian occupation. “We would talk and a bridge—silvery, light, quivering, shimmering—formed like a rainbow over the century between my little Central Europe and the immense Latin America; a bridge that linked Matyas Braun’s ecstatic statues in Prague to the mad churches of Mexico.” For Kundera, the experience of reading One Hundred Years of Solitude moves from a free-flowing appraisal of magical realism, into an analysis of historical and social continuities between two countries traumatized by centuries of invasion.

Both stories are found in The Curtain: An Essay in Seven Parts, Kundera’s latest installment in a trilogy of non-traditional literary criticism that includes The Art of the Novel (1988) and Testaments Betrayed (1995). Exemplary of an analytical style that gathers meaning from personal experience, as readily as it does from a practitioner’s analysis of literary works, The Curtain is a variation on a beloved theme—the writer in his library, eternally unpacking his books for the reader. It can also be read as Kundera’s “late work,” a theme he circles around in his discussion of Picasso, Fellini, and Beethoven as artists freed from the chains of the “lyrical age” of youth when they created works that defied the expectations of critics and audiences alike. However, The Curtain is far from the decadent theatrics of late 1970’s Fellini, or the child-like self-portraits of the aged Picasso. Instead, it is a well-mannered, if quirky examination of the novel as the supreme generative force of Modern Europe. A pantheon of literary saints ranging from Cervantes to Witold Gombrowicz people Kundera’s erudite analysis of formal continuities and discontinuities in novel writing from the first stirring of Modernism in the 18th century to the post-war avant-garde. As a supplement to his traditional analysis of literary motifs and themes, Kundera explores Czech folktales, music theory, and personal anecdotes, with equal determination to distill the methods in which narratives both affect and reflect our emotional and intellectual lives.

In marked contrast to The Art of the Novel, in which Kundera eloquently describes his methodology as a writer, The Curtain hides its author’s own books within a shaggy-dog analysis of pivotal moments in the history of the European novel. Kundera’s theories concerning the unique qualities of the novel are not in themselves new ideas; in fact Kundera is not at all concerned with espousing “new” ideas on the novel. It is precisely his staunch, at times almost conservative dedication to a discussion of the novel as an autonomous art form that makes his critique a much needed counterpunch in a market polarized by post-structuralism’s narrow games and laymen’s how-to-guides.

Humor in all its guises remains a touchstone for Kundera to analyze how philosophy and psychology are intrinsic elements explored within the novel’s existential framework. Don Quixote, by praising a supercilious young poet, transforms himself in the youth’s eyes from a madman to a genius—such is the fragility of the human ego that belief systems are continually shifted by our mutable relationship to others. According to Kundera, “We are laughing not because someone is being ridiculed, mocked or even humiliated but because a reality is abruptly revealed as ambiguous, things lose their apparent meaning, the man before us is not what he thought himself to be.”

The complex relationship of politics to literature is a subject in which Kundera has tremendous personal stake, being a writer who transformed his own experiences living under totalitarianism, and later as a political exile, into novels, short stories and essays. He argues that the powerful lucidity of Kafka’s novels comes in part from their “non-engagement” with ideology and political programs. In The Art of the Novel’s dictionary of “Sixty-three Words,” beauty is discussed as the “suddenly kindled light of the never before said.” The spark that radiates in Kafka’s novels as “the last triumph possible for man who can no longer hope,” emanates from a wholly literary vision conceived within a formal genre, not from political thought shaped into literature. In “Sheep,” a short story by Kenzaburo Oe, bus passengers are terrorized by a group of soldiers, and as a result of their humiliation perform their own acts of psychological abuse on a single passenger. Like Kafka, Oe presents us with a non-engaged, situational aesthetic that can be translated onto future times and places, thereby rendering the lessons of the story invaluable to readers of any nationality or era.

In order to demonstrate how a work of literature can be an active participant in shaping our knowledge of political situations, Kundera turns towards a decisive moment in recent Czech history. The 19th century movement to resuscitate the Czech language from its evaporation into German leaves many unanswered questions concerning the nature of patriotism’s blind appeal to his Czech ancestors. “It was not the knowledge of historical events I lacked. I needed some other kind of knowledge, the kind that, as Flaubert would have said, goes into the ‘soul’ of a historical situation and grasps its human content. Perhaps a great novel could have made me understand how the Czechs of that time had experienced their decision.” Historical, fact-based knowledge of a past political situation can never supplement the enigmatic, unquantifiable knowledge literature can provide to a reader.

One criticism that has been recently leveled against The Curtain is the book’s refusal to discuss the role of academia in the changing reception and evolution of the novel. This deliberate oversight comes in part from Kundera’s personal insistence on a past idyll of intellectual enlightenment, constructed more from a poetics of historical recreation than from traditional research into the early Modern period. It should be taken into account that The Curtain’s final appraisal of contemporary culture is gauged from the hermetic practice of a 78 year-old erudite writer, not a maven of contemporary culture. Friedrich Schlegel’s list of important trends in 18th century Europe does not discriminate between Goethe’s Wilhem Meister and the French Revolution, leading Kundera to question why works of art and literature are no longer placed alongside political events as weighty historical barometers. His rhetorical question, “Who would dare to attribute equal importance to a work of art with the fall of Communism in Europe?” is answered with a list of 20th century trends to match Schlegel’s: “Decolonization, Heidegger’s critique of technology, and Fellini’s films.” Yes, those names may not be on everybody’s lips in 2007, but they could easily be found snugly together (perhaps as a seminar?) in a college course catalog.

Reading between the lines of The Curtain, one is struck by the emotional intensity of its author’s analysis. Transformative love is in fact the true subject of the book: the “dazzlement” that the work of literature bestows upon the child reader is later transformed into the useful knowledge of formal beauty. The intelligent poetics of a novel’s structure, its musical tonality, is what first and foremost brings the reader under its spell. Italo Calvino in Six Memos for the Next Millennium describes an ancient legend of Emperor Charlemagne’s love for whoever possesses a magic ring. The Emperor’s love embodies different human forms, before finally in old age it settles on the contemplation of a lake that hides the ring in its waters. For Calvino, the story’s rhythmical formal structure conveys the Emperor’s enchantment with the ring more powerfully than the actual events described. Taken further, the story becomes a parable for the reader’s own relationship to the changeling body of literature, a desire for the imaginary that persists without rational explanations, carried along by the current of language.

Kundera, true to his belief in the “usefulness” of literature, restores a sense of responsive urgency to the storytelling tradition, by tracing the novel from its primordial rumblings to an imagined future devoid of innovation within the genre. The last chapter of The Curtain, entitled “Eternity,” focuses its lessons around a story whose truthfulness or factual basis is bypassed in favor of the vision that springs from it. An unknown musician in Paris “one day” forever changes the repetitive musical tonality of Gregorian Chants by adding a voice in counterpoint, thus setting off a chain reaction within all the arts of Europe, in which individual artists, writers, and musicians, “their names lit up like lanterns,” lose their anonymity as contributors within a historical model. In Milan Kundera’s vision, one that is shared with more people than perhaps he suspects, we are continually fighting to remain active participants in the privileged graces of a historical model, one that can be lost to us as mysteriously as it was conceived.

How to Live a Best Life, With Melisa Tien

The term “living your best life” is an identity concept which seems rampant on social media—this idea that whatever we might be doing with ourselves, living one’s “best life” is completely in our own hands; it is a readily available utopia should we choose to live it. For Tien, this play came from the process of seeing this concept of a “best life” against the backdrop of the “real racial and economic divides” which were being heavily reported in the media while she was writing.

Cézanne brings his radical and extreme engagement with the practice of painting to his work on paper, endowing what is ostensibly conventional subject matter—landscapes, portraits, interiors, and still lifes—with an unpredictable charge.