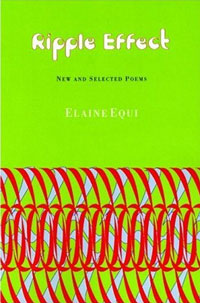 Elaine Equi releases the enormous potential energy of irreverence in Ripple Effect, her brilliant collection of new and previously published poems, as she assumes a poetic voice that simultaneously embraces and mocks poetic appropriation. She freely borrows rhythms and images from her predecessors and contemporaries—Neruda, Frank O’Hara, David Schapiro, Rae Armantrout and too many other to mention—addressing each poet with homages that mirror but also subtly distort their styles, reassessing their creative explorations with her own baldly honest and unpretentious poems.

She does not attempt to parrot her fellow poets, to achieve their goals through imitation, but instead attempts to trace their work’s trajectory and carry it farther. This process creates new possibilities in their work, adding to the richness and vitality of their legacies. “Now X is dead, so Y can be X. / And Z is dead, so A can be Z,” Equi writes, “There’s no shame in becoming someone else. / You may even be better at it than they were.” She engages other creative minds by sampling their creations, slipping in and out of their voices with effortless grace, presenting their essences in crisp, succinct columns of truncated phrases. Her writing is sharp and direct. Where other poets run sensitive, classically trained hands over a knot of ideas as they delicately, ponderously attempt to untie it, Equi enters with a blade and cleaves the whole mess in two, so that the concepts sprawl open, raw and utterly revealed.

The process of inhabiting the Other seems central to Equi’s creative experience. Rather than performing a superficial survey of another artist’s style, she attempts to see him from within and record her discoveries. For Equi, “all writing is a form / of transvestism… You read Rilke / and you become Rilke. / Nothing can stop this / endless, transformative / flow of selves / into other, opposite.” Of course, one finds it difficult to construct an idea of Equi’s stable identity beneath the constant flux, but this only renders her work more fascinating. Rather than concealing her influences and sources of inspiration, Equi places them center-stage, calling each of her muses by name and revealing the interactions that lead to her creative output. She portrays herself not as an individual creative force, but as a voice integrated within a complex modern tradition.

But Equi also transcends the tradition in which she participates, creating something entirely her own. While borrowing tactics and image systems, she tailors them to illustrate her personal perspective in a successful effort to “replace the narrative / with another / form of narrative.” Her approach recalls the Futurist architects, who acknowledged their predecessors but vigorously sought a new form that broke with tradition in order to achieve a “fresh start.” Architect Antonio Sant’Elia wrote that “modern constructional materials and scientific concepts are absolutely incompatible with the disciplines of historical styles,” and urged architects to shed their “predilection for the monumental, the heavy, and the static,” while striving to enhance their “taste for the light, the practical, the ephemeral and the swift.” His manifesto perfectly illustrates the thrust of Equi’s endeavors. She employs her own world view, a new constructional material, to build poems that match the works of those before, but reject their symmetry and pomp. She attains, instead, to create organic movements, mess and chaos that reflect her perceptual experience. “Though classically trained / as wild-eyed and tragic / to the opulence / of opera,” she writes, “you bring / a harsh / elemental reality: / vinegar stored / in an oak casket / salt poured / on an enemy’s wounds.” Here, she seems to describe herself, an educated woman immersed in ancient and contemporary culture, but driven by a vision that is uniquely hers. She harnesses tradition’s power without catering to or enforcing its repetitive and limiting restrictions. As her instructive “Sensuous Reader” suggests, Equi flirtatiously evokes styles and voices explored by other poets, but she does not revere them to the point of paralysis. “Buy some expensive chocolate. / Then go to the library / and whisper the author’s name / (preferably dead) aloud. / Wait for them to arrive / or for something else to happen. / Variation on the above: / eat the chocolate and go home.” Equi engages in dialogue with those she admires, romances them, but always moves beyond them, abandoning them altogether when she has absorbed their influence.

Equi’s desire to move forward, to push away from familiar order and structure, becomes most visible in “Opaque Saints,” which contrasts extraordinary men with the commoners who passively observe them. “Opaque” recalls saints willing to “leap out of themselves,” willing to act on unreasonable urges without hesitation in order achieve moments of rapturous transcendence. “So often, we too consider irrational acts,” Equi writes, “But wait holding our breath / until the moment passes.” She tells us that timidity is a shortcoming that prevents our accomplishing anything of significance, and makes light of those who prefer the tameness of consistency to ecstatic experience. “Hell is the neat, well-organized place / from which we contemplate / the disruptive lives of saints,” she writes. This attitude towards rationality resounds throughout Ripple Effect, and invites admiration for unreasonable, “disruptive” behavior in life and in art. Equi’s commitment to seize upon ideas and forms pertinent to contemporary life, to pursue candor and spontaneity even at “inopportune moments,” seems a result of her admiration for saints, her desire to escape the boredom she despises. “Poetry,” according to Equi, “is not about words,” just as dance is not about steps. Every genre of expression must provide new revelations beyond its experiments with form and presentation. Equi approaches words as starting points from which to launch her disruptive expression, and through them becomes something larger than the poets that inspired her, something larger than herself.

Tuhin Das’s Exile Poems: In the Labyrinth of Homesickness

From an interview that follows Das’s new collection of poetry, Exile Poems: In the Labyrinth of Homesickness, the writer says, “I am a Bengali and Bangladeshi first. Some people want to define me by my religion, but I want to be known by my culture, which is Bengali.”

Los Angeles based painter Sayre Gomez’s exhibition of new work, Renaissance Collection, currently on view at the Fondazione Sandretto Re Rebaudengo in Turin, Italy consists of five paintings focused on the eponymous collection of apartment buildings by developer Geoff Palmer. Palmer is notorious for being both a sleazy and rapacious figure in the LA real estate scene, and also, something of an idiot, having once claimed that “The Italians actually settled LA before the Spanish and Chinese.

Gregory Corso died more than twenty years ago, but his meticulously composed final poems are presented here for the first time, thanks to the tireless efforts of Raymond Foye and George Scrivani in retrieving its manuscript and preparing it for publication.