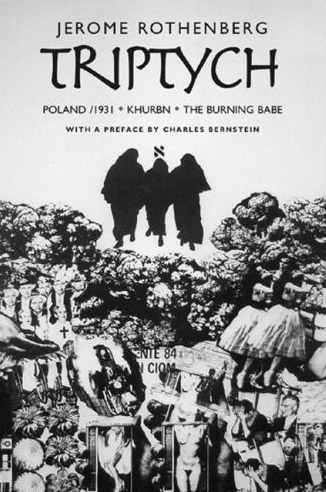 Before Auschwitz, the extermination camp was unimaginable. Today, it can be imagined. Because Auschwitz really happened, it has permeated our imagination, become a permanent part of us.

Jerome Rothenberg was born in America in 1931. That year, 1931, also marks the beginning of the poet’s parallel, imaginative, investment in the Central European world of his parents, a world that had ceased to exist by the time Rothenberg had moved from babe to boy. Triptych is haunted by this double consciousness. It is as if written from the other side of this imaginative divide, so that the dead might come back and speak to us:

saddlesore I came
a jew among

could be it’s trouble

could be could be

The poems in Triptych envision a place neither there nor here: they build a liminal dwelling of betweenness, populated by ghosts and goblins, where objects are disguised as words and words are used as objects of resistance. All of this is presided over by historical personages brandishing indelible facts and syncretic figures making the only sense we may know this side of Heaven.

The Jewish world of Poland, evoked in the first poems of this collection, survives in three magical places: the historical record; the memories and testimonies of survivors from the time; and works of the imagination, such as Poland/1931. Triptych is both a testimony to, and proof of, the necessity of imaginative acts over, and indeed against, fixed memorials. Its three-part structure works as a counter to the binary thinking of good/bad, us/them, here/there, dark/light, theism/disbelief. In these poems, Rothenberg swerves away from binary thinking toward the dialogic, that is, a third term that is always on the horizon but never grasped. In this way, Rothenberg forces lyric poetry to splinter into songs, like sparks escaping from fire. With the full force of lyric enunciation, Triptych articulates the otherness of the known and the familiarity of that which is foreign.

Rothenberg’s poetry actively resists closure, unity of design, and singleness of method. The commitment is to viscerally grapple with that which is difficult to confront and impossible to contain in any single image or icon. In the trilogy, Rothenberg employs an exemplary range of styles: there is no one voice, no one kind of representation. Indeed, Triptych is full of radical changes of perspective, angle, tone, and format that never entirely add up so as to better remain restlessly on the move, troubled as much as troubling. For this is a poetics of discrepancy rather than mimesis.

Rothenberg notes in his preface to Khurbn, the second poem of the trilogy, that he visited Poland for the first time in 1987 and that he could only find there, then, ghost traces of the Poland that he had so memorably brought to life in Poland/1931. This absence, the vanishing of the Jewish world and the negation of any way to make sense of the agency that caused it, is at the heart of Khurbn.

Khurbn is one of the few American poems to figure the systematic extermination of the European Jews. Yet so much depends upon the terms of this figuring. In Khurbn, Rothenberg turns Adorno not so much on his head as on his side. Negative dialectics (the negation of any expressive representation) is the poet’s starting point, since there is never a question of representing the totality of the desecration. But Rothenberg moves from the groundlessness of negative dialectics toward a series of concrete expressions, notations, responses, and images that are serially constellated in a way that never fails to open onto a void or negation or absence:

They covered the mirrors with towels, drew the blinds, knocked over the chairs, broke the dishes, & stopped the clock. Then he put on a pair of felt slippers, to accompany the coffin. (Poland/1931)

The method is already anticipated in Rothenberg’s 1968 working of a Tibetan source in Poems for the Game of Silence (Dial Press, 1971):

Khurbn was written in the late 1980s, when Rothenberg was in his late 50s. In his preface, Rothenberg writes that in Poland/1931 he had come up to the edge of the catastrophe but not gone over it. This conscious, and no doubt unconscious, refusal or evasion or “repression of war experience” (to use the title of Siegfried Sassoon’s haunting poem) is an acknowledgment that the modes of representation available or even inventable were inadequate or themselves evasive or repressive of the trauma.

The problem is inherent even in the name. The extermination of the European Jews was not a sacrifice, which is why Shoah, a Hebrew word meaning catastrophe, is often used in preference to holocaust. Rothenberg, however, uses a Yiddish word, ¸ meaning destruction, which retains, for him, the power of the vernacular.

Triptych ends with The Burning Babe, a series written, very consciously, in the first years of a new millennium and some of which was first published in an illuminated book with a Pandora’s box of vivid images by Susan Bee.

Who is “the burning babe”?

No doubt it is the poet’s doppelgänger, the Jewish baby born in Poland in 1931.

The baby as ash, negation, empty, hollow (and so as alter Christ).

Who can speak for this infant?

It is not as if Rothenberg asked for the assignment. He was chosen.

These poems are everywhere in touch with what Stevens calls “the pressure of reality.” And wherever this pressure is felt, you will find a hole.

Where there is no possibility of a whole, there dwells the holy.

The burning babe becomes cinders in the Holocaust of our imagination. We have been forced to imagine the unimaginable and face that which we cannot give a face (Demon, Golem, the Dark). The burden for poetry after Auschwitz may be as much what we have to unimagine—negate—as what we must reimagine, in other words, reconfigure and reconceive. This is the ethical foundation of Jerome Rothenberg’s stunning series, Triptych.

This material will appear as a preface to Triptych

Imre Kertesz’s quotation appeared in the Hungarian weekly Elet es Irodalom (8/28/06), and was translated by Reka Safrany for Sign and Sight (signandsight.com)