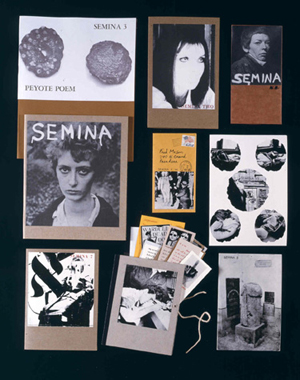 In 1957, Wallace Berman (1926-1976) had his one and only show at the Ferus Gallery in Los Angeles. Two weeks after it opened, the L.A.P.D. Vice Squad closed the show because a copy of Semina, which was included in a sculpture, was considered “lewd.” Berman was found guilty and fined $150.00, a considerable sum at the time. The offending material was a reproduction of an ink drawing of a “peyote vision” by an artist who went by the single name Cameron and who had been married to Jack Parsons, one of the founders of the Jet Propulsion Laboratory. Both Cameron and Parsons, who died under mysterious circumstances in 1952, were devotees of Aleister Crowley. Berman was a serious student of the occult, which was one reason why he and Cameron became friends. From the people whose work was included in Semina, it is clear that Berman was both extremely tolerant and very particular about his friendships; you had to be independent and brilliant, or what others might call nonconformist and idiosyncratic.

Berman’s response to the authorities was to shift his energies to Semina. Between 1955 and 1964, he produced nine issues, which largely consisted of a loose-leaf gathering of poems, translations, drawings, and photographs. The issues were never sold, but given or mailed to people. The forty-eight people who contributed to Semina included former child movie stars, artists, poets, playwrights, choreographers, and filmmakers. Together, they formed a diverse community that included people who had made it in Hollywood, only to drop out, and people who lived from hand-to-mouth and in some cases were petty criminals on the lam.

The focus of the exhibition and accompanying catalogue (I urge everyone to obtain one) is the Semina side of Berman, an innovative artist whose only monograph was published in Amsterdam in 1992. In addition to presenting a small but choice selection of work by each of the forty-eight contributors, there is a portrait photograph of the artist, often taken by Berman, as well as a capsule biography. Loree Foxx (1929-1972) was “arrested in Arizona as an indigent, and was sent to the Arizona State Penitentiary.” While in custody, she had an asthma attack “and was given medication she was allergic to which killed her.” Only a small part of Foxx’s work is extant. Along with Foxx, Berman included work by artists such as John Altoon, Joan Brown, Cameron, Bruce Conner, Jay DeFeo, Llyn Foulkes, George Herms, and Jess—all cult figures who, in different ways, challenged, shunned, or toyed with the commercial side of art and didn’t want their identities as artists to be tied to commercial success. This rejection of the status quo is also true of the poets included in Semina. Robert Duncan, after the release of his book Bending the Bow, in 1968, elected to stop publishing for fifteen years, and Bob Kauffman took a “ten-year Buddhist vow of silence after the assassination of John F. Kennedy.”

Instead of trying to assimilate into the art or literary world, the contributors to Semina granted themselves authority over their own work and gave each other both mutual permission and support. Their meeting place was Berman’s irregularly published but lovingly produced magazine. Long before the term “institutional critique” became fashionable among those who hold professorships and wield considerable power, Berman did something unthinkable, vital and necessary: he helped form a self-sufficient community that not only didn’t look to the outside for its authority, but was remarkable for its tolerance. However, if you think that this cannot be done again, you’re wrong. Between 1969 and 1999, and in the vein of Semina, Ken and Ann Mikolowski (who died in1999 at the age of 59)—her exhibition of paintings in Detroit will be reviewed in the next issue of The Rail—published 30 issues of The Alternative Press, a gathering of poems and original works of art that was also mailed to friends. Robert Creeley contributed five hundred original poems handwritten on postcards, and Brenda Goodman, George Schneeman, Joe Brainard and Jim Gustafson contributed original art works.

Michael Duncan and Kristine McKenna, the organizers of Semina Culture, are to be commended for bringing this important chapter in freethinking and independence to back into the light.