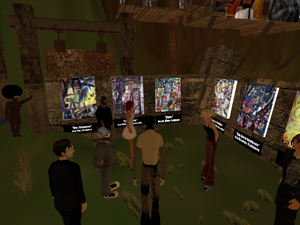 During my jaunts in Second Life, I came across a group of artists, including Filthy Fluno and Gracie Kendal, chatting on Artopolis about upcoming shows, happenings and real life info about their own lives. The art is by Filthy Fluno.

What is Second Life? (affectionately referred to as SL). It is “a vast digital continent, teeming with people, entertainment, experiences and opportunity,” according to the website, where users, called “Residents,” manipulate online personas called “avatars,” who interact with each other. It costs nothing to register as a Resident, create an avatar, wander the SL landscape, and meet, date and have sex with other avatars. However, in order to participate in the SL economy and pay for anything from a haircut to a work of art, you must invest in the SL currency, which is called Linden Dollars (at an exchange rate of 1 USD to 250 LD).

Under the public radar for so long, this past February, SL marked a major milestone of four million registered accounts and revenues of over 1 million USD a day. This seemed to poise SL on the cusp of a broader social relevance.

Artists from around the world have been drawn to SL’s burgeoning culture scene. Southern Californian painter, Gracie Kendal, logged onto SL for the first time last October: “…[I] fell in love with this virtual world. Started going to live music events, and going to the art galleries. And I realized this is a great venue for getting my art out there and seen by so many more people. I started to upload my art into SL, and rented a gallery space and from there, people started to see my art and I got invited to show at other galleries…it has been wonderful ever since.”

Kendal and some friends joined forces to establish one of the many thriving online art colonies: Artopolis (http://artropolitans.com/). She also started “selling” digital images of her work to other Residents to decorate their “homes”—“Since I started selling in November, I average about 30-40 sales a month,” Kendal says—though her prices are hardly in the PaceWildenstein range, hovering around the 400 to 500 Linden Dollar mark ($1.80 to $2).

Not only are artists posting or creating work in SL, but an online journal about SL art, appropriately titled Slart (http://slartmagazine.com), has emerged under the guidance of veteran artist Richard Minsky. “I saw that there was no critical evaluation of the art in SL, and that nobody was bringing the art that was being created there to the attention of the outer world,” he says.

Minsky explains there are over 200 art galleries in SL’s Gallery Owners Group and artists from many disciplines are regulars. “There are many artists who photograph their art and import it to SL in the hope of either attracting interest in the global market or in selling enough…to pay their rent in SL,” he says. “There are also artists whose work bridges both worlds. And there are a growing number who use the in-world object creation tools to make art, including sculptural and scripted works.”

For the skeptical who question the use of SL and doubt that it can have any real impact, SL supporters can point to a growing number of corporations that are evidently not content with terrestrial globalization but are now branding the virtual world as well, including General Motors, Dell, and IBM. The web-based world has its own Reuters news bureau (secondlife.reuters.com), and is home to a “college campus” of the New Media Consortium (NMC), which consists of 200 international colleges, museums, corporations, and organizations dedicated to exploring new media and technologies. (SL has also been the scene of terrorist attacks, like the three gun-toting members of the SL Liberation Army who shot customers outside an SL American Apparel shop.) 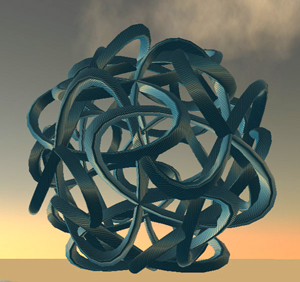 Bathsheba Dorn’s “RhombdO.” Bathsheba Dorn uses the creative tools of this metaverse to build sculptures that evolved from Bathsheba’s “real world” editions of 3-D bronze and stainless steel prints, available via the Internet. Photo by ArtWorld Market for SLART.

On the New Media Consortium campus is the Aho Museum, which recently hosted a retrospective of StarAx, one of the superstars of the SL art world. Fortunately, for those of us not at the one-day show—which was attended by 150 users—it was captured for posterity and available on YouTube (http://www.youtube.com/watch?v=vUgGgTCbcgE). Curated by the Aho Museum’s Tayzia Abattoir, the show included more than 30 pieces, some as high as 25 (virtual) meters.

Everyone has their favorite SL artists, and Kendal readily offers her own, “I love Esch Snoats and Filthy Fluno. They have crossed, or blurred the boundaries between SL and real life. They have incredible talents with their mediums and it really transfers well into SL…there are some incredible photographers in SL, whether transfering real life images into SL like Sinsabar Holgado, or taking SL photographs and digitally altering them with Photoshop, as Marisela Bouchard.”

Eager not to be left in the cold, museums and galleries are also logging on. Soho art dealer Jen Bekman has reputedly set up shop, the George Eastman House in Rochester, N.Y. has had exhibits, and the U.S. Holocaust Museum has mounted a virtual version of the photo exhibition, “Our Walls Bear Witness: Darfur — Who Will Survive Today?” 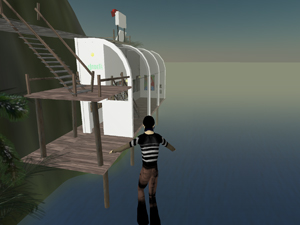 An additional creative outlet for SL artists (and non-artists as well) are the avatars, which can easily turn into works of art in and of themselves. A white male user could portray himself as a black woman one day, a small forest creature another and an Asian male the next. Sometimes the avatars become so elaborate that they can resemble post-apocalyptic club kids or pimped-up anime characters.

Kendal says she prefers to simplify things between her online and offline selves, “I am a 34 year old female in real life. Exactly like my avatar, no deception there.” SL’s makers, Linden Labs, believes there’s a big future for art in SL, and Robin Harper, Vice President of Community Development at Linden, explains that SL was intended as a place for collaborative creativity from the beginning. “The fact that artists have been so successful suggests to me that we’ve been able to give them the tools and inspiration that we hoped they would have,” she says. “The one complaint I have heard is that pricing in SL isn’t high enough to support art as a full time job.” 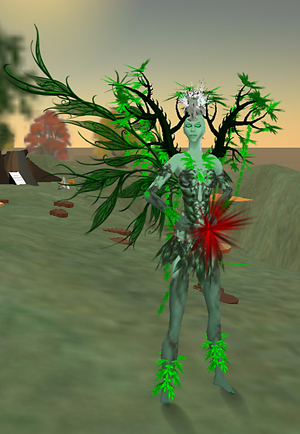 “In Kenzo” represents a type of resident that is working to transform an avatar into art. Photo by ArtWorld Market for SLART.

While artists who have made the digital leap ought not plan to retire soon, if recently reported rumors are true that IBM may be amassing an online art collection, then those paltry Linden Dollar prices may very well jump once corporations start snapping up the best online art.

In terms of quality, the art produced and/or exhibited in SL doesn’t yet reveal a Picasso or Pollock hiding in the matrix, and some of the work tends to be more kitschy than inspired, but an elevation of standards may only be a matter of time. Harper says that Linden is doing as much as it can to support SL’s art scene, “Last year we gave out a US$4,000 fellowship to two students in Second Life, who are also students at the Art Institute in Chicago. The fellowship was for exploring Second Life as a new medium for creativity in the visual and performing arts, and was awarded by a panel of reviewers from around the world. I hope to continue this program, and this year am looking at supporting an artist in residence program that’s being put together by iCommons in Croatia.”

SPORE-inside.jpg&#148; alt=&#148;&#148; />SLART editor ArtWorld Market inside a work by Seifert Surface, entitled “Spore,” in order to give a sense of the scale of the huge airborne artwork. Photo by Rose Krasner for SLART

Kendal is equally optimistic about the future for SL. “I can definitely see a future for art in SL. SL is a piece of art itself. There are so many creative people that have come into this amazing world. And more coming in every day. And not just artists, but art connoisseurs, art promoters, curators and so forth. I have a friend who works in PR and runs two galleries. She is always looking for new artists and even commissions work. Another friend runs an art promotion company. As more people come into SL, more people will create and buy art here. And it is a perfect venue for helping to sell our real life works too.”

What the cyber-future holds for SL art is anyone’s guess, but, in the here and now, there are obvious advantages for artists and collectors, even if they can’t physically touch the objects being exhibited and sold. Harper explains, “I bought a sculpture at a benefit and it was different from real life in that 1) I could afford it and 2) it was easy to transport.”

While every SL artist may have her or his reasons for logging on, Kendal shares her own: “Whether it’s our first or second life, there are endless possibilities to what we can do, especially in SL. So why not live each day to its fullest. Why not become that famous, or infamous artist, in SL that eludes us in our real lives. As long as I don’t have to cut off my ear.”

A complete transcript of Hrag Vartanian’s interview with Slart editor, Richard Minsky, is available at: http://hragvartanian.wordpress.com.