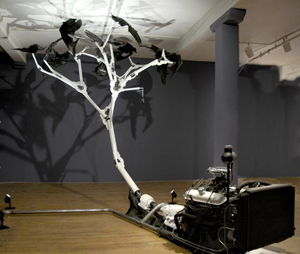 It seems ironically fitting that Pierogi’s current exhibitions happen to coincide with the announcement from the Intergovernmental Panel on Climate Change that human activity is, beyond a shadow of a doubt, slowly roasting the planet. Both Michael Schall and Jonathan Schipper, presenting their work in solo shows, update the age-old theme of man v. nature to contemporary industrial and environmental realities. While avoiding simplistic, tree-hugger sermonizing, they conjure visions of a world where nature is twisted by technology into perverse contortions.

Schall makes gorgeously modeled graphite drawings on paper, creating scenes that somehow seem dreamily utopian and nightmarishly ominous. Industrial structures spread, virus-like, through barren landscapes: a power plant creeps down a crevice; cranes march up a mountain; cables traverse a plain like a river. But the relationship between industry and nature is not so clearly one of victimization: strangely, the industrial hardware, optically integrated by Schall’s velvety, monochromatic modeling into the environment, seems to grow out of the earth rather than intrude into it. Pipes and electrical cables weave through the rock like arteries, as if providing sustenance to the land. In the drawing “Desert Bunker,” the rippling forms of a cliff transform almost seamlessly into a boxy, modernist structure. Was the bunker built into the rock, or did the rock form around the bunker? One could see these drawings as a depiction of a distant, surreal future, where nature has reconfigured itself around manmade topography. But the factories and mines are not ruins, and the present-tense verbs in some of the titles make it clear that the machines are definitely switched on. The land is a living, breathing, androidal organism, part nature and part machine. 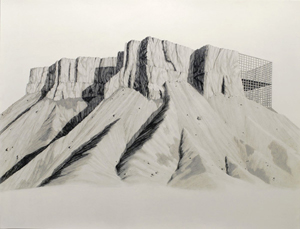 By weaving the natural and unnatural into an inseparable whole, Schall equates the forces of mechanized modernity with those of erosion, tectonic shifting, and weather. But this comparison is not necessarily a comfort to humanity, since nature marches along with a blind ruthlessness to which no human enterprise should aspire. Schall’s drawings warn (in the hushed tones of his smoky graphite rendering) that industry is as unstoppable as the natural forces it harnesses.

Jonathan Schipper’s sculptural installation Firebird presents these dangers with unapologetic aggression. The piece consists of a working engine from a 1969 Pontiac Firebird that sits on the floor encased in a black, Batman-style metal armature. The engine is modified to power a branching, treelike array of hydraulic pistons topped with pairs vigorously flapping crow’s wings. Literalizing the name of the classic sports car, the sculpture also references another iconic bit of sixties culture, Hitchcock’s 1963 film The Birds. In contrast to the whispered warnings of Schall’s drawings, Schipper’s sculpture shouts that technology has already had its evil way with nature.

Schipper’s past work has frequently involved similarly freakish hybrids of the organic and the mechanical. For his 2006 piece Raining Blood, he chopped apart a cast of a classical figurative sculpture at the joints, and rigged the fractured parts so that they thrashed and gyrated to the rhythms of a Slayer song. With Firebird, the experience is less viscerally torturous, but perhaps more rich in allusions: the combination of Romantic imagery (recall Casper David Friedrich’s Tree of Crows, 1822) with modern, industrial forms speaks not only to technology’s decimation of nature, but also to the history of the sublime in art. Whereas the ultimate experience of the 19th century would have been death by exposure to the elements, in the 20th century it was dying Pollock-style in a car wreck.

Accompanying Schipper’s contraption is a large drawing of the sculpture, which combines diagrammatic renderings of the apparatus with goth-ish painted embellishments. Interspersed with machine part labels like “cooling sensor” and “air switching solenoid” are seemingly tongue-in-cheek phrases like “evil thrust,” “sublime thrust” and “it really has to do with larger social economic forces,” as if parodying an analysis of the work’s “deep meanings.” The drawing seems a little redundant, since it merely spells out ideas that are already covered much more gracefully in the sculpture itself.

The pairing of these two artists offers an opportunity to examine a single issue in terms of two drastically differing emotional registers. These differences prevent the works from becoming mere illustrations of a theme. Whereas Schipper portrays the rape of the natural world with as much full-frontal violence as possible, Schall shows us how these terrors can creep up on us, unnoticed until it is too late.

Adam Thompson is a contributing writer for the Brooklyn Rail.

On November 7, 2021, Woodmere Art Museum in Philadelphia hosted a panel discussion on the exhibition Body Language: The Art of Larry Day, which was organized by Woodmere in conjunction with the Rosenwald-Wolf Galleries at University of the Arts and Arcadia Exhibitions at Arcadia University.