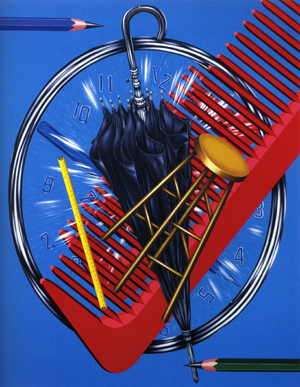 Tradition, community, and their preservation are sticky subjects for artists in the 21st century. The communication, trade, and information networks that encourage interaction among once isolated cultures have engendered a pervasive sense of ambivalence. Hopes for fruitful cultural cross-pollination have devolved into anxiety over the hybridization and, worse, disintegration, of traditional ways of making art. Is it possible to appreciate another culture without exoticizing it, or to appropriate its forms without simplistically mimicking them?

Forty five years ago, Naoto Nakagawa hopped a freighter to New York City from Japan. Globalization was the last thing on his mind. He admits to being swept up by the New York School lore that drifted across the Pacific. His grandfather was one of the most revered traditional landscape painters in Japan, yet he was fascinated by Rothko and de Kooning. To further complicate his roots, Nakagawa studied as a teenager with Kikonami Joji, one of leaders of the Gutai group, an avant-garde movement that broadened the terms of action painting to emphasize the entire body as an artistic instrument. Despite being an exceptional case, Nakagawa’s journeys across the Pacific Ocean and the New York art world is proof that two cultures can collide at full speed without totaling their original identities.

Triple X: Extended, Exploded, Extracted – Naoto Nakagawa, 1965-1975, at White Box provides a glimpse into Nakagawa’s early developments upon arriving in the United States in 1962. A second, unrelated show called Scream of Nature at Ethan Cohen Fine Arts showcases Nakagawa’s recent work, revealing an artist shaped by four decades of reconciliation between West and East, the man-made and the natural world.

The work at White Box feels very American, even without the benefit of knowing Nakagawa’s story; however, traces of his traditional past manage to surface. Rather than directly celebrating the natural world, as his grandfather did, or the expressive power of the human body like the Gutai, he looks to the mundane vocabulary of American Pop. The tensions wrought by the utility-drawer subject matter in Nakagawa’s paintings can be read as natural forces in an epic struggle against man for control. “Echo 1” (1972) depicts a hammer swinging toward a mirror, scissors strangled by straining rubber bands, and the tines of a hair comb bending sideways, ready to snap like trees in a hurricane. The whole scene is a single catalyst away from exploding into disorder.

Similarly, “Echo 2” evokes nature’s raw power through visual metaphors couched in sleekly painted tools and household utensils. They float in shallow, synthetic atmospheres of flat acrylic paint, and their synthetic, straight-from-the-tube primaries vibrate dizzyingly across the walls of the gallery. The painting is loud, intense, and sophisticated, and, although it leaves room for interpretation, it doesn’t allow much time for it.

Nakagawa’s imagery evokes associations with James Rosenquist and Jim Dine among other Pop practitioners; however, while these American forebears were more apt to treat such subject matter clinically, Nakagawa’s prefers to humanize and sexualize them. This tendency anticipates his move away from the hardware store, so to speak, a transition that is signaled by “Still Life with Earth” (1975), in which the scissors, comb, and hammer that were so active in earlier work are tamed and neutered into less than suitable vehicles to carry the power of the natural world.

The work at Ethan Cohen Fine Arts demonstrates Nakagawa’s eventual reliance on nature as a subject. The work is quieter, but still powerful on its own terms. It retains vestiges of the hyper-rich, keyed-up palette of the earlier, Pop-influenced work, as well as its penchant for drama, but he nurses the foreplay between the viewer and the content, building gently and gradually to a climax. An enormous, wall-size painting, “Red Landscape,” (2006) depicts a thatchy close-up of a forest. It’s a natural setting, but its hyper-resolute detail and intense color is far from calming. “Ephemera” (2007), another large, tightly cropped weedy vista, gives the viewer only a little more room to breathe, thanks to a patch of deep, unnatural cobalt blue sky in the upper left.

Unlike the individually gripping works at White Box, the paintings at Ethan Cohen seem to succeed by committee. The show is densely hung, and the paintings themselves are busy to the point of suffocation. Their rich, saturated colors contradict the reality of the environments they describe, and build to an unsettling and humbling experience. Intensity runs like a high voltage current throughout all of Nakagawa’s work; the orgiastic immediacy of his early paintings is matched by the cumulative power of his landscapes. Scream of Nature will leave the viewer wondering what hit them long after they leave.

These two exhibitions are only portals on either side of a decades-long career, and there is a lot in between. Since landing in the United States in 1962 under the spell of New York’s artistic ferment, Nakagawa’s work has undergone an organic process of borrowing, divesting, and capitalizing on both his traditional and adopted cultures. The disparate influences weighing on his art, like the saturated colors of his palette, sit in conspicuous contrast without neutralizing each other.