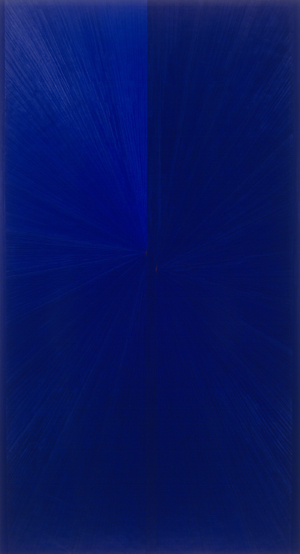 Mark Grotjahn’s recent exhibition of oil paintings qualifies as a half-waking Modernist dream. Unlike his exhibition earlier in the year at the Whitney Museum, where kaleidoscopic, electric colors crashed into dense perspectival distortions, these paintings are given a deeper, darker timbre. The solemnity of what, at first glance, appears to be a room filled with black monochromes, slowly gives way to radiating shades of indistinct, mesmerizing blues. And so we’re awakened, with the remnants of early modernist painting lingering in our brains and the metallic sheen of evasion honing our eyeballs.

Compositionally, Grotjahn relies on his standard format, in which various bands of color (in this case varying shades of blue) radiate out from a central vertical band containing two disjoined vanishing points. This kind of perspective, used since the Renaissance to create the illusion of depth on a two-dimensional surface, was also symptomatic of the privileging of the individual and a reduction of possibilities to the One–one view: one position, one authority over nature. It is this kind of didacticism that Grotjahn evades. Nothing here is stable, nothing fixed. When viewing Grotjahn’s canvases face-on, it is unclear whether we are meant to be peering down into, up at, or directly through something, or simply staring at a flat surface. Not even the surfaces, though, remain constant. As you move about the gallery, light is reflected and refracted in hypnotic movements off the paintings’ surfaces as a consequence of the artist’s thick and matter-of-fact application of paint. Sensations of vertigo multiply, as the surfaces seem to ripple and spin.

Grotjahn calls these perspective-bending compositions “butterflies,” which is a loaded, open term. While an obvious reading would relate Grotjahn’s outwardly radiating structures to the bug that transforms itself from worm to winged beauty, I lean more toward their spatial implications. A butterfly-wound is an exit wound of a projectile in which the flesh or bone surrounding its exit point spreads and opens in a wing-like formation. It is also a suturing technique that places tension on either side of an open wound, thereby closing it. To apply this metaphor to Grotjahn’s picture plane is to interpret it as a simultaneously opening and closing space. This amorphous reading is the point. It speaks of transformation, a place where things change before your eyes (and in your head).

It’s this kind of aesthetic opacity (one that disallows clear understanding) that denies Grotjahn’s paintings a pragmatic openness through which multiple views are admitted. If that were the case, the argument for a single authority, i.e. one-point perspective, would remain as one of many equally valid possibilities. In these paintings that position is excluded. Instead, Grotjahn creates a space in which multiple perspective points are the only possibility.

There has also been much speculation, most of it compelling, as to what lies beneath the surface of Grotjahn’s paintings, quite literally. The artist has made it clear that he often begins his canvases with brushy, expressionist renderings of masks and faces. The gallery press release for the exhibition states that Grotjahn “primed each one [canvas] with a layer of radiant orange-red paint. In some cases he added a brush drawing of a mask-like face…” In some of the paintings, traces of this action can be glimpsed—a small fleck of orange burning through the blue at the perspectival point of origin, or faint traces of lines and marks showing through the skin of surface painting. The reasons for this underpainting/overpainting, however, aren’t clear, since Grotjahn has never offered an explanation. I see this refusal as a political move, by which he refuses to control the discourse surrounding his art, much the same way his paintings refuse any fixed reading. Physically and metaphorically, his practice buries a region of painterly content deep into the thick, heavy mix of his radial mark making. To my eye, it adds a murky depth to his repetitive compositions, like vocals layered beneath musical fuzz. If you’ve ever seen Grotjahn’s expressionist mask paintings, you’d be hard-pressed to get their ridiculous, goggling eyeballs and idiotic expressions out of your mind. This imagery could be taken as a snide, smart-ass gesture (which it is), but it’s also hilarious, reminding us there’s a place just below the surface where order and rules fall apart, leaving us with nothing more than memories of our own idiocy, our own inability to ever know what exactly is going on.