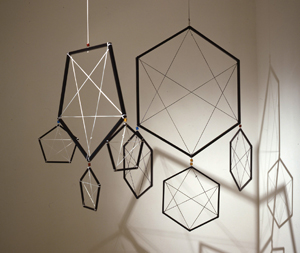 All images are copyright the artists; courtesy Wilkinson Gallery, London.

Thomas Hirschhorn’s shows tend to create a stir. His Musée Précaire (precious museum) in Paris housed masterpieces from the Pompidou Centre in a cardboard building out in the working class suburbs, while his phenomenal Swiss Centre installation, Swiss-Swiss Democracy (2004), sparked an argument in the Swiss parliament for daring to be critical of their democracy. Here in London it has been quieter, except for the fact that the elegant premises of Stephen Friedman’s gallery—located in fashionable central London—has always been a somewhat incongruous venue for the rough-and-ready Hirschhorn aesthetic.

One could describe Hirschhorn as a fan; a fan of ideas, of philosophers, pornography (it seems), of art (definitely), and most certainly of brown tape. He created one group of “sculptures” as a homage to the intellectual texts that had influenced him; literally they were giant “books”, facsimiles created from cardboard and tape reminiscent of Chinese votive objects, which are made from paper in the form of consumer goods and burned during the Hungry Ghost festival. Let’s call him “bricoleur as fanboy”.

This time round the “Flat Daddy” provides the inspiration. “Flat Daddies” are the life-size cardboard cut-outs of troops deployed in Iraq that the U.S. military has been handing out to families to ease the pain of separation. With the help of these “substitutes” and mannequins, Hirschhorn has created two large “dioramas” or “islands” under the title Substitution 2. The dioramas take up most of the gallery’s two spaces; viewers are funnelled into a narrow channel along the edge of the spaces and forced to take refuge in the small chamber between the galleries that is normally the domain of the staff. Thus in a simple way, Hirschhorn has inverted the use of space in the gallery.

“Dead in the water,” reads the sign hanging on the first cut-out figure one encounters—a woman and presumably a “Flat Mommy”—while at her feet another sign says “Dark days for democracy.” This image sets the tone for the show. Hirschhorn’s attention of late has turned to the Middle East, or at least its portrayal in the media, hence the numerous “flat soldiers” and the images of bloody organs and wounded troops he has collaged onto giant heart shapes. The spaces on these “islands,” full of figures, furniture and stacks of photocopied paper, seem to be transitional ones: waiting rooms, consultation offices, even an airplane. There are four chained and bearded figures, in orange jumpsuits emblazoned with the words “CULTURE,” “RELIGION,” “SOCIAL” and “ECONOMY.” Perhaps four new horsemen for the apocalypse? Or maybe the state of a world taken hostage? “Flat Daddies,” the artist says, “are the perfect illustration of the chaos of the world we are living in: on the one hand apocalyptical chaos and methodical destruction and on the other hand that cardboard-figure that gives comfort an identity.” Strangely, his work possesses an optimism and even humour: witness the large toy tiger reclining on a sofa.

As usual, Hirschhorn’s work reflects the enormous and varied streams of information we process each day. From numbers (pinned to the head of each mannequin and cardboard surrogate) to banners (“The Unforgettable,” “Moment of Truth”—the show’s subtitles) and advertising , the Paris-based artist’s work seems like a widely unfurled net capturing bits and chunks of this rush of information. The critic Leo Steinberg, referring to Rauschenberg’s objects, once coined the term “flatbed picture plane.” Inspired by the techniques of printing, it defines the leveling of the hierarchy of the picture plane and asks the viewer to imagine the objects as visual information placed on a tabletop. Our times seem to have replaced this horizontality of print with the infinite field of digital space. What is unique about Hirschhorn is his ability to successfully negotiate a return to a more tactile, hand-made aesthetic with a politicized subject matter—grungy thinking perhaps—Rauschenberg by way of Hans Haacke. Perhaps it’s best to consider him in a more European tradition of artists like Blinky Palermo and Joseph Beuys, who have merged the political and the aesthetic into an indivisible unit. 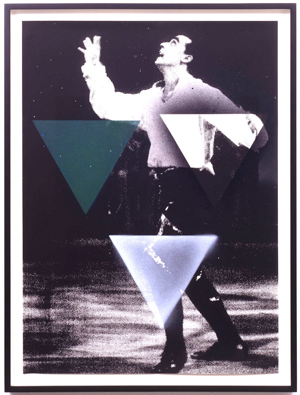 All images are copyright the artists; courtesy Wilkinson Gallery, London.

In contrast to Hirschhorn’s anxiety, Jacob Dahl Jürgensen seems comparatively tame and relatively contemplative. Like some other younger artists, Jürgensen seems to view Modernism as a decorative aesthetic to be plundered. Peter Petri, Eva Rothschild, and recent Turner Prize winner Tomma Abts all tap into aspects of Modernism’s aesthetics and push it towards other ends.

Entitled The Folly of the Mysticals, his exhibition, which included media ranging from light-filled sculpture to collage and “augmented” posters, uses geometry in the form of hexagrams, triangles and circles as the basic building blocks of a visual language. A large, prism-shaped copper tube sculpture, “Folly (The Mystic Sphere),” reminiscent of some of Rothschild’s wooden structures, has a string of lightbulbs draped across it. While his “Sigil Tag Placards,” with their stenciled geometry on posters, are reminiscent of John Baldessari’s obscured photographs, Jürgensen’s geometric shapes have more of a relationship to the imagery than Baldessari’s did. .

If there is a mystical component to the work, it is hinted at rather than directly spoken of. Does Jürgensen even believe in mystical thinking or is he simply posing questions regarding its aesthetic? His work does not have the intensity, for example, of Hilma Af Klint, but that perhaps is an unintended consequence of his ongoing critique of Modernism’s rationality.