Lee Bontecou has long achieved what most artists aspire to: she has created a world that is entirely her own. Brilliantly dark with an inherent sense of foreboding, it opens itself to us without losing its unpredictability and hence, we stay on our toes. The experience her work provides is so akin to travel that it becomes a pastiche of impressions: at times, we recognize elements of the here and now, then again tracing hints of an imaginary future. 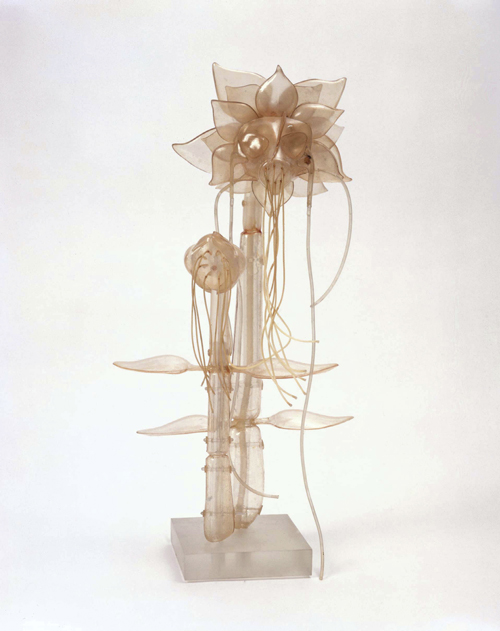 In Bontecou, we are suspended between realism and science fiction, finding our thoughts unraveling with the layered textures before us. Every detail seems capable of containing uncertain depths, ready to morph into omni-applicable symbols of existence. Part poem, part scientific configuration, Bontecou’s sculptures and related drawings seem as fresh and urgent as ever.

The works from the late 1960s and early 1970s, which are the main focus of this exceptional exhibition, describe a landscape rooted in flora and the deep seas. Many of these works, which marked a radical departure from Bontecou’s acclaimed sculptural canvases stretched over welded steel, had were exhibited at the Leo Castelli Gallery in 1971. It was this last project with Castelli and in the following year that Bontecou left the gallery to avoid the pressure of constantly having to produce art for new shows. Throughout the 1970s, ‘80s, and ‘90s, she resolutely abandoned a public career to focus on raising her daughter and teaching while keeping up the demands of her artistic growth in a remote residence in rural Pennsylvania.

Today at Knoedler, we might see this body of work from our contemporary point of view, though the light is arguably the same. Fish with Piranha-sharp teeth and mutations of flowers with gas mask-inspired heads populate the space. As strange and unearthly as some details appear to be, the overall attribute is sheer elegance. Her drawn lines are of a crispness reminiscent of Surrealist renditions and her favored sculptural material at the time, vacuum formed plastic, seemed to defy the laws of gravity. There is an overt lightness in her touch, be it in the fine shading of white colored pencils on black paper, or in the rhythmic fusion of transparent plastic parts. One can trace a sense of tenderness embedded in the making of these works, with the artist’s eye carefully studying her subject before improvising and defining its true nature. One can imagine that in this case, the creative process must be labor intensive but also quite meditative. It is one of Bontecou’s most recognizable qualities that despite all the gloomy facets that her images encapsulate, she establishes an atmosphere of serenity.

Bontecou’s work translates as a continuum. Indeed, it is interesting to note that Bontecou herself dated many of the exhibited drawings over decades, such as Untitled, 1970-2006 as if to stress their timelessness. The concerns embedded in her work, the vulnerability of nature, the industrial age’s threat of complete destruction, dangerous mutations, and extinction are more pressing today than in the late 1960s. However, the understanding of the ultimate malfeasance—a nuclear war, for example—has become blurrier the more time has passed since Hiroshima’s terror.

To me, Bontecou’s work is telling of an older generation’s wisdom. Born in 1931 in Providence, RI, she was old enough to comprehend the devastations of World War II and to witness Korea and Vietnam, albeit from a rather safe perspective. She has seen three quarters of the 20th Century unfold with its numerous flirtations with irrevocable disaster. While the conceptual understanding of the various dangers of the world might not be that different between generations, the fear of them certainly is. To the young, the dangers have become more and more of an intellectual abstraction. Bontecou’s work is enriching because it is not only sensitive to life’s fragility, it celebrates the beauty this consciousness entails. It is not careless or flippant, but it has true trepidation. It is not by chance that many of her creatures remind us of ancient life forms that have steeled themselves for the unknown. Like the fish that one finds in the deepest parts of the sea, which live out their lives tucked away in the darkest corners of the ocean, Bontecou has dreamt up survivors. Her organisms often seem armored. Even Untitled (Pupa), 1969, a small sculpture, which manifests as a translucent life container, appears indestructible: a nurturing cocoon of an unknown creature on the inside, it has nothing but mystery for those on the outside, be it enchanting or threatening. As in this case, nothing in Bontecou’s vocabulary is stagnant—everything moves through transformative stages, constantly becoming and evolving.

If we trust this optimism, there must be hope despite the bleakness. Maybe that is why in recent years, Bontecou has returned to share her quest with a public audience. In her mid-70s, she is as vibrant and accessible to all generations as any artist could hope.