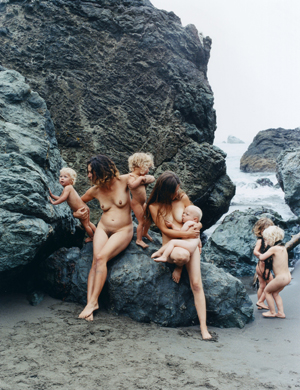 Photos by Justine Kurland at Mitchell-Innes & Nash depict, from the middle distance, naked women cradling their toddlers or leading them through semi-wilderness. The—mostly white—bodies manage to seem artificially placed without anything particularly artificial about their poses or the settings. Kurland traveled across the country with her own one-year-old, asking women in national parks, campsites, and on beaches to pose for her. It seems she may have intended to “say” something about the human body in nature, but these bodies appear strangely out of place; looking at them, I kept feeling something was missing, some camping gear or hiking boots. Whatever the popularity of sociobiology, in these photos it seems apparent that we’ve come very far from a time when we might have looked completely “natural” in nature.

Kurland is influenced by nineteenth century pictorialism, which was by definition an attempt to persuade rather than document. Yet there are no stories here, and the only moment when something seems to “happen” is when one of the nursing toddlers looks out in a detached way, like a cow munching grass. I’m still not sure what Kurland’s intention was, and that is as it should be. She may have a theory, but she throws her elements together and lets them do what they will.

She has all the fascination of documentary on her side, written on the bodies of the women. I found myself focusing on their worn look, as if ravaged by childbirth. They are deeply individual in a way that the naked bodies we tend to see depicted elsewhere are not. The figures stare out of the photos with all the fierce humanity of Dutch portraiture, while the toddlers recede into ornamentation like so many baroque putti; blond or brunette, it hardly matters, they are all perfect. Maybe, after all, Kurland means to show something about how bereft we are in the face of the natural world, how, in Wordsworth’s words, “for this, for everything, we are out of tune.”

One woman sits in a pose that is a mirror image of the nude in “Dejeuner sur l’Herbe,” looking, if anything, more displaced than Manet’s provocative figure. I wondered if, in the same way that Manet declared his radical indifference to a painting’s subject matter being entirely legible, Kurland has it in mind to liberate the female body from its erotic (and mercantile) connotations. There is nothing provocative about the way these women interact with the landscape, their children or their own bodies. It’s as if to give back the female form some of the dignity denied it by popular imagery in exchange for a feeling of blank dispossession—leaving only the body itself, pale and lost against some sharp rocks.

Riffing on Valerie Solanas’s 1967 feminist broadside announcing “the society for cutting up men” (SCUM), Kurland’s project adds a silent B to indicate that, here, it is men’s books that are being cut up.