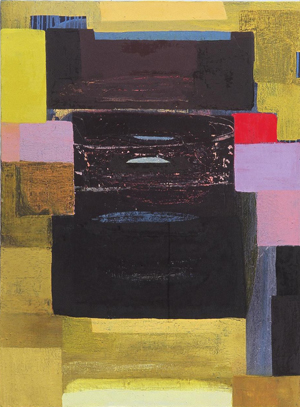 In a talk given at the Royal Danish Academy of Arts, Frank Stella, clearly tilting at the contemporary art market, drew a distinction between “exalted” and “ordinary” art. Abstraction, he said, is exalted, while Pop Art is ordinary. In one sense this was his way of saying he is old fashioned and doesn’t accept that an art whose beauty is self-evident is on a par with an art that needs to be explained to the viewer. (He also said that animation was not art, which, as a fan of Hayao Miyazaki, I cannot accept.) But in another sense, he was making the very intuitive statement that some work’s got it, and some ain’t got it.

Cynthia Hartling’s small abstract paintings, which showed at Galeria Janet Kurnatowski last month, got it. They have the internal kinesthesia that draws us to art in the first place, the surface tension of perfection where all the elements are moving against each other. The hard work and sense of history encompassed by the pieces are immediately evidenced in their quality, a point Stella would surely agree with. Hartling’s relationship to her antecedents informs the work but neither suffocates nor sneers; it is visible in the craft rather than in any self-conscious references or goofiness. Her use of color is ravishing and deeply personal, from pistachios, aquas, and hot oranges to deep, saturated blacks. Hartling compares her process to “editing.” She returns to the paintings again and again, reworking them with an obsessiveness that somehow makes sense for her, focusing sometimes on tiny areas, almost embroidering them, and other times painting over whole swathes of older pieces.

In his talk in Denmark, the painter whom Stella chose as his representative of the exalted in the second half of the twentieth century was Hans Hoffman. At least one of Hartling’s paintings, a patchwork of ochre and black with one luminous, fire-red square, seems to refer to Hoffman. Hartling says that she has been thinking about that artist’s synthesis of the geometric and the organic, and she must also be informed by his theories about pictorial structure, as is evident in the push/pull of her colors. But she takes the recognition of “space” in abstraction outwards to the third dimension; earlier layers of paint show through newer ones in relief, as with the “ghost” circles that appear in the right hand corner of one untitled work. Instead of using tape, she draws and redraws thick lines with her palette knife, sculpting the oil paint, almost getting her hands into it. Other times she will scrape paint across the older surface as if she is trying to drag something across the canvas, fight with it, torture it, until the moment it becomes beautiful and all signs of the struggle fall away.

In these magnificent, conjoined novels, The Passenger and Stella Maris, McCarthy has taken the oldest story in the world—humankind’s search for meaning in a world seemingly devoid of God—and makes it feel fresh and personal to each and every one of us.