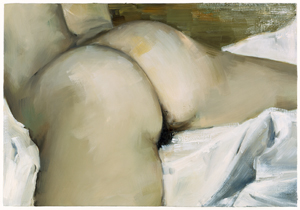 Am I attracted to Gillian Carnegie’s paintings, which were on view last month at Andrea Rosen Gallery in Chelsea, because I like paintings of trees? Or is it that I like her paintings of female asses? Since Carnegie’s subjects range from the relatively benign, isolated nature painting—along with the brooding architectural structures that often occupy the landscape, such as a gateway into a cemetery—to intimate little studies of excellently formed female asses, this is not an unreasonable question.

In a Carnegie show—and there have only been a few—one subversive “bum” is bound to be inserted among the commanding canvases of otherwise uninhabited, earthy scenes. Clearly, the artist’s experience painting two beautifully-formed, dimpled butt-cheeks is a thrill worth revisiting, and one of which she has not grown tired. To me, these dimly lit female backsides feel like a barometer of Carnegie’s own level of artistic, as well as sexual, desire. And the fire from these cropped, headless, limbless lust-regions—kindling, essentially—ignites the entire body of work and brings it up to a warm Chelsea blaze.

Even if Carnegie’s mind is hard at work forming a rebuttal to her artistic instinct—what does it mean for me to paint a female rump?—her paintings continue to generate their own internal experience without seeking to justify themselves. Refreshingly, they tell me of their maker’s needs, not my own. They tell me what kinds of things awaken the artist, what pierces through boredom enough to merit picking up a paintbrush. These are the things that necessitate such conscious and concise exercises in paint; that require the artist to formulate this precise area of the female anatomy with such a loving blend of delicacy and boldness.

As voyeuristic (and perhaps pornographic) as my reaction to Carnegie’s work may be, as much as I enjoy getting caught up in their seductiveness, I can’t help but to see her paintings as teetering on the tired and academic, as carcasses of a lost tradition. Her “bums,” in fact, may be the most academic of them all. Throughout the history of art, there have been many landscape painters who have also painted the nude—Corot, for example, who was always looking for ways to get trees, flesh and bridges together in one picture. Does this mean that I’ve walked into a trap? Are these pictures slyly conceptual appropriations, faux salon paintings ingeniously devised to catch me in the act of drooling all over them?

At a glance, the paintings have a suspicious “art student” quality. It’s as if Carnegie has appropriated the generic look of a Painting I studio class, or perhaps Painting II, of any undergraduate art school. In this sense, the works present us, strategically, with the artist’s own coming-of-age, and we admire her guileless adolescence with profound curiosity. Thomas Mann’s Death in Venice captured this sense in the jaded composer who plants himself down in a lounge chair to play voyeur to innocence, and to watch its deterioration. Here, we watch the young painter discover the melancholy beauties of the world in a succession of uncharted discoveries, and we yearn, gawk, from a distance.

But Carnegie, who was born in Suffolk, England, in 1971, is not so young, and perhaps not so naïve. There’s also a big difference between an overly caffeinated, post-pubescent painting major who has just hung her first nude portrait in a group crit and a rising international art star who has already been short-listed for the Turner Prize.

It’s hard to know if Carnegie is a faux naïve. She comes across as seriously and studiously mysterious, a talent folded in on itself—a genuinely guarded individual. Her investigative brushwork, deft, hard-cropped compositions and quirky realizations, though specialized and “advanced,” are easy to miss. So much so that I find myself strangely grateful that Andrea Rosen didn’t pass on this artist, whose point would have been so easy to miss. And even Carnegie’s more aggressive paintings of curtains or abstract black-on-black tar pits have a way of reaching for logic despite their timid ecstasy. In other words, they don’t really let go: they’re coy. Some pieces from her last show even reminded me of Piet Mondrian’s early paintings from life—which certainly never could have been considered “young” work. They surely were not about the playful glee of Tadzio running across the island sands of his Italian resort playing catch with his bouncy ball.

In this way, the works’ academic traps may be misleading, and perhaps it’s a mistake to look at Carnegie’s work as either the step-by-step development of a green painter who must learn from her mistakes, or the inheritor of a box of art historical hand-me-downs. Her work doesn’t make me think of fellow Brit Glenn Brown, who investigates the dormant nether-regions of the Rennaisance, nor John Currin’s buttery Rococo-land, nor Elizabeth Peyton’s dashing Book Forum chic.

With Carnegie, the reliance on art history is much more relaxed and laid back—as if she were simply born into a built-in repertoire of classical standards, and she’s perfectly satisfied without having an “original” composition to her name. In this way, Carnegie resembles a jazz performer pleased to swing into her rendition of “What Is This Thing Called Love” just for the loner at the end of the bar who requested it.

Or maybe Carnegie’s work is altogether blind, and in fact strangely un-savvy to art history, like so many art students these days. Perhaps her work functions as a ritual in the mechanics of painterly common sense: an artist simply using her tools. In this case, her process would constitute a kind of eroticism of making, not mining—and it wouldn’t really matter if she were painting a nude rear-end or a naked tree branch because both, despite their differences and similarities (think Gulliver), are made with the same tools and occur on the same imaginary topography.

At Andrea Rosen, Carnegie’s single “bum” painting is a bit more revealing than earlier works from this series. The artist ventures further down into the cleavage of the gluteus maximus of a woman on a stool who has slightly shifted her weight onto one hip. This painting, “Belle” recalls a 2002 oil on board, “Nude on White Linen,” not included in the show, of a woman on her stomach with slightly parted legs, the dark patches of shadowy disappearance recalling Courbet flipped over. These are not so much ass paintings as vagina paintings. In the same way that the legs of her face-down model are spread apart, Carnegie slightly parts art history—and we look in.

There are many unknowns in Carnegie’s work, and many vague and possibly apathetic emotions. One gets the impression from the thinness of some of the work that she refuses to paint if she doesn’t feel it. You don’t get the sensation that there are studio assistants churning away all afternoon, painting from 9 to 5, preparing for the marketplace. It’s more like she just paints, existentially, perhaps saying yes to the mid-day bottle of wine and a nap, only staying on if she’s in the mood. And who wants to watch a painter perform if she isn’t in the mood?