I am the Beautiful Stranger–Paintings of the ‘60s
PaceWildenstein 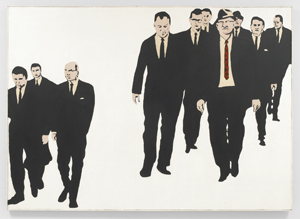 I’ve waited thirty-five years to see this exhibition of paintings and painting-collages by Rosalyn Drexler, which she made between 1962 and 1967. It’s not that I haven’t seen any; it’s that I have never seen enough, and this important exhibition goes a long way toward rectifying that. Let me explain. In 1972, while I was living in Cambridge, Mass, my poet friends and I read Drexler’s novel, To Smithereens, about a professional woman wrester. We began scouring secondhand bookshops for her I Am The Beautiful Stranger, published a decade earlier, and which, as far as I know, remains out of print along with To Smithereens. Like my friends, I was intrigued by the book’s bio, which said that, in addition to being a novelist, a former professional wrestler, and a playwright, she was a painter showing in New York. This was the Mount Everest of cool and Drexler not only scaled it more than thrice over, but she also quickly earned a place in my pantheon.

For years now, I have thought of Rosalyn Drexler as a rara avis, a novelist and painter whose art was as good as her writing, which is awfully good. This exhibition has convinced me that Drexler is more than a special case; as a master of edgy fiction, theater, and painting, her talents and accomplishments add up to a unique combination that no one, not even Dennis Hopper or Steve Martin, can rival. And, to go even further, she has never become a celebrity and continues to refuse the temptation of turning into a cause celebre. Such independence has made her a cult figure unlike any other. In no-brow America, this is about as good as it gets.

The exhibition ranged from small painting-collages to large oils and acrylics, all done when Roy Lichtenstein and Andy Warhol were making their first breakthroughs about subject matter, as well as hardening what they did into a smooth, machine-like style. It is clear from the period covered by this exhibition that Drexler belongs right in there with them, and doesn’t lose anything in the comparison. One telling difference is in her subject matter, which is derived primarily from films and other mass media, and the way Drexler marries it to the paint. On one wall of the gallery are five small painting-collages of a man and a woman. From left to right, the subjects include a mugging, a vampire biting the shoulder of his victim, lovers embracing, a couple making love, and a woman straddling a man while scratching his eyes out and wrestling him for a gun. One could easily imagine dozens of young art historians and curators writing furiously on the relationship between these paintings and Michel Foucault’s theory that all relationships are about power. But that would ignore these works as paintings, and that Drexler is interested in what images can tell us through the medium of paint.

Drexler isolates her figures, which are always doing something, against a bright monochromatic ground, often red, blue, or yellow. When she divides the painting into distinct rectangles framed by a white band, each area might be a different solid color. The ground is both flat and spatial, which the artist further exploits through the poses of her figures. In the small, exquisite, mostly yellow Ernie Kovac’s Funeral (1963)—the subject, evidently from news coverage of the groundbreaking comedian’s death, suggests that she understood what it meant to be a cult figure right from the beginning—the pallbearers are depicted in the bottom left hand corner, headed off the edge, while the widow, Edie Adams, and family are isolated in the upper right. Through placement and a slight shift in scale, Drexler conveys an immense space, at once physical and emotional. The yellow ground gives the painting a jarring effect; mass media, it seems to suggest, removes us from reality, even as it delivers it to us. That, I think, is what separates her from Warhol, who was fascinated by the culture’s voyeurism and his own.

Drexler’s sense of placement and space is always on the mark. In Marilyn Pursued By Death, Monroe is striding towards the right hand corner, trying to escape a paparazzo, who is just a step or two behind her. Both are wearing sunglasses and their bodies—a single two-headed form—are outlined by a red aura. They are dressed alike, a white blouse and shirt, blue skirt and blue pants. Derived from a photograph, Drexler reduces the figures to lights and darks, their faces to gray and greenish-gray; they exist somewhere between photograph and cartoon, but always in paint.

Movies and television, specifically the filmstrip and the film still influenced the other formal innovation that Drexler developed. Home Movies (1963) is a large blue field á la Newman that has been divided by white vertical zips into rectangles that grow in size to accommodate the imagery they frame, including a gangster pointing a submachine gun. In counterpoint to Warhol, who used a grid to convey sameness, Drexler structures the painting to underscore multiple, changing viewpoints and shifts in scale worthy of a smash zoom, with action always at the center of attention.

In Is It True What They Say About Dixie (1966), two groups of men in black suits and black ties (except for a red flowered one on the “leader”) walk toward the viewer. One group is headed straight for us, while the other, smaller in scale and number, is moving at a slight angle to the picture plane. They are stern and dangerous-looking and there is no doubt they are segregationists. The dynamism of this and other images is the opposite of what Warhol and Lichtenstein became known for. She painted with a brush and never tried to imitate a machine.

Drexler’s paintings belong in the room in the museum dedicated to Pop art, right in there with the big boys. Cool, passionate and tough, her paintings wrestle their work down to size.