It’s over, it’s peaked, it’s sooo yesterday. Never fear, the “art fair mania” bubble has burst. We’ve reached “Post-Art Fairism.” While standing in a line stretching for blocks to get into The Armory Show, an elegantly dressed European gentleman was asked if he’d seen anything that stood out during this trip. “Well there was the piece in the park where they give you drugs and whiskey, perform oral sex on you, and then steal your wallet.” “That wasn’t part of the fair, they were just local whores” responded the questioner. “Maybe, but at least I came away somewhat satisfied, and they didn’t put me on a waiting list.” But seriously, as a passionate fan, I’m not saying that art fairs will go away (I wouldn’t want them to), only that the seemingly endless proliferation phase has reached a tipping point. 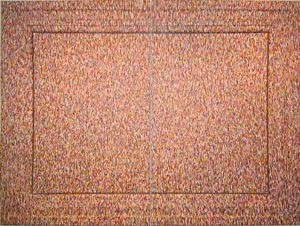 To bolster my argument I offer a few observations. While scuttling between Pulse, Fountain, the Armory Fair, Scope, and The Art Show, I couldn’t help but notice several gallerists who had participated in recent extravaganzas but were sitting out the shindig this time around. Some, looking twitchy, seemed to have a serious case of art fair “jones.” Talking to them, they sounded like recently reformed drunks still not quite over the Florida bender, swearing never to indulge in that kind of self-destructive, déclassé behavior again. Though they all insist through clenched smiles that they’d done “really fine” in Miami, I had to believe that they wouldn’t be participating now if they weren’t fried both emotionally and financially.

Although I’m not exactly the power broker type that art world bigwigs seek out for advice or comment, I must have chatted with no less than five individuals in the process of organizing even more fairs, an enterprise that happily forgoes the dirty job of actually having to sell art. Fair organizers, instead, tap an income stream dealing in the potential opportunity to deal. Add to this the bad timing of New York’s art fair week (too soon after Miami, with lousy late-winter weather almost guaranteed), crowded aisles, booths stuffed more like flea market bazaars than “artistically tasteful” presentations, and some just plain “Day of the Locust” bad manners displayed by a number of would-be visitors (in one case, fair management stationed a security guard to protect a performance artist who was aggressively poked and prodded by the pointy toes of high-heeled viewers). You know we’re due for a change.

Despite my grousing about the Armory Show’s lack of risk, extravagant gestures, or crazy subversive installations that scare, insult, befuddle and challenge, there were some standouts. Imagine a dollhouse for a dysfunctional Barbie who’s an incorrigible packrat strung out on meth, and you’ll be able to picture “Tantamounter 24/7” (2005). This miniature re-creation commemorates an installation/performance project undertaken by the European art collaborative Gelitin at the Leo Koenig Gallery in 2005. Another presentation worth seeing, thanks to an exception to the fair’s policy of exclusively featuring living artists, was Öyvind Fahlström’s “Life Curve No.1, Ian Fleming” (1967) at Galerie Aurel Scheibler. This influential artist, who died young, should be better known here, and his work, a personal gloss on Pop, which commingles collage, photography, and painting, looks like it came out of the East Village yesterday.

At PULSE, Fred Tomaselli’s “Echo, Wow and Flutter, Sideways, Flopped and Mirrored” (2006), a wallpaper design at Art Ware Editions, raises many questions, not the least of which is: why does this look so right? A large silver-leafed canvas by Tood Pavlisko, featuring bold script spelling out “Cocaine” in tufts of white plastic tabs at Monique Melocke made my nose tingle nostalgically for the big bad Eighties. Works by Ted Victoria are always a thrill—half-magic, half-science project. A small low-tech projection of overlaid images at Schroeder Romero was poetic in its simplicity. Brose Partington’s “Tide,” an elegant black wave of undulating fabric 75 feet long, sponsored by Dam, Stuhltrager, that literally lapped at the feet of passersby entering and leaving SCOPE was one of the few installations that broke out of the booth box and created a state of solemn awareness through its own unpretentious presence.

Capping off a Saturday night of fair hopping, the Design Industries Fighting AIDS (DIFFA)’s Dining By Design benefit was a surprising treat for a very worthy cause, and the creativity of its installations challenged anything at the art fairs. Each participant produced a fantasy table setting that was auctioned off to benefactors as a seating for luxury dining. Memorable tableaus included Continental Airline’s dining niche overhung with a virtual upside-down garden of fresh tulips.

Don’t throw out that extra-wide tie, those ankle-length peasant skirts, or your six-inch platform shoes. Like your Aunt Agnes admonished, “Just wait, they’ll come back in style.” The fashion wheel has turned and, at least for the moment, we’re given permission to consider various types of abstract and experimental painting again. The critically well-received “High Times, Hard Times: New York Painting 1967-1975” at the National Academy of Design will hopefully raise awareness and appetites for abstract painting. Curated by Katy Siegel in consultation with David Reed, “High Times” (reviewed in the March 2007 Rail by Ben La Rocco) is a look back at the not-too-recent past when, as Robert Pincus-Witten explains in his brief catalog essay, an anti-painting jihad had been proclaimed, spearheaded by October magazine and a cadre of Downtown deconstructivists. Of course, like the cockroach, painting survived, but its most advanced manifestations evolved in response to other art forms, such as performance, video, process art, Conceptualism, and feminism.

If “High Times” illustrates painting’s limitless adaptability, then a spate of current abstract painting shows in and around Williamsburg demonstrates its appeal to new generations of practicing artists. In a curatorial career that’s spanned more than twenty-five years, Larry Walczak of “eyewash” finally decided to put together his first painting show. “I‘d been making my usual studio visits when it became apparent that there was a synergism happening with several artists. There was a freshness and a natural vocabulary that included hard-edged, optical, gestural and even computer animation.” “Brooklyn Abstract” at Supreme Trading features thirteen painters from all around the “biggest borough,” and, as with “High Times,” it demonstrates the broad gamut of recent abstract investigation. When questioned about the sudden resurgent interest, exhibitor Don Voisine, responded, “I’ve been working abstractly for twenty-five years so I’m glad people are looking at it. I think abstraction is more open to interpretation. Maybe it’s a reaction to all the figurative work being shown in the galleries now.” This diversity of approach includes the “all over” fields by Jesse Lambert composed of zippy brush strokes, drips, and cartoon images in highly-keyed colors that are fractured and repeated to the point of unrecognizability. Peter Barrett has crafted interlocking painted reliefs that operate somewhere between the early black paintings of Frank Stella and diagrams of chemical compounds. Peter Fox contributes an ambitious wide-framed diptych completely covered in a pointillist swarm of primary color drips. By contrasting the manipulation of the physical properties of paint with its coloristic nuances, Fox achieves luscious results that tweak accepted notions of paint/painting.

Other abstract painting exhibitions in and around the nabes include Cynthia Hartling at Galeria Janet Kurnatowski. These new works demonstrate Hartling’s continuing development of a solidly colored, simplified, almost naïve, design. With techniques as varied as staining, knifing, sanding, and glazing, these small to medium-sized pictures display a newfound confidence. The lengthy periods of time over which the pictures were fabricated has worn and polished the imagery like stones on a beach or the armrests of an old chair, eliminating non-essential elements and distilling content to a satisfying frankness.

Also intriguing is the scruffy, nonchalant elegance of a group of paintings by Jonah Koppel at Klaus von Nichtssagend Gallery. Looking like finger-painted slabs, centrally positioned blocks of textural paint (a mixture of synthetic polymer and pigment) are haphazardly overpainted in neutral monochrome tones of earthy greens, browns, and yellow. The low-keyed color, velvety matte finish, and laidback presentation exude a casual though comfortable rigor.

Artist, writer, and curator, Joe Fyfe, a well-known Brooklyn art advocate, has recently been working in Cambodia and Vietnam as a Fulbright Research Fellow. His uptown show, at James Graham & Sons, is a selection of works inspired by his travels. Although Fyfe has a reputation as a prickly and “serious” abstractionist, these sensuous collaged paintings reveal a “serious” sense of humor. Fyfe’s signature burlap supports are cut, spliced and glued back together with narrow hunks of intensely colored felt and fabric functioning as compositional cross members. The lightness and supple character of the paintings are reiterated by their loose attachment to their supports, more draped than stretched. Because the hues of the added fiber elements are dyed rather than applied, they contrast intensely with the washy, white-stained burlap. Accumulations of skuzzy lint, stray threads and patched holes imply a kind of hobo chic aesthetic while carrying material analogies to the drips, splatters, and smudges of Abstract Expressionist painting. These works feign an austere formalism while remaining as endearingly shabby as Charlie Chaplin’s “Little Tramp.”

The book is both a chronicle of Mania’s journey from theater nerd to night-lifer to writer, and the journey we all hope to take: to find and embrace the many, and sometimes messy, parts of our identity; to find our place in the world; to find the people that help us get there.

End of the Line

During our time scattered amongst the living, we are frequently on the receiving end of advice to the effect that death is the event we should fear the most—a reflex that has always bewildered me.