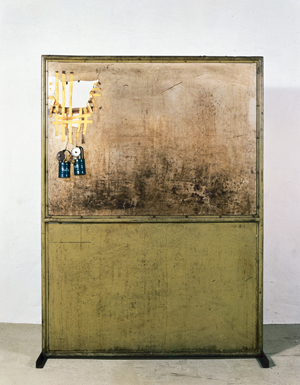 Beuys’ hallmark use of non-art elements, which included fat, felt, earth, stones, and copper and iron sheets, among other so-called symbolic “survivor” materials, took the basic idea of the readymade from Duchamp and pushed it beyond the notion of the “found object.”

Two of his early sculptures in the exhibition: “Horns” (1961) is made entirely from rhinoceros horns and plastic tubing filled with red liquid, evoking a primal, erotically stimulating antenna-cum-circulatory system; the seminal “Earth-Telephone” (1968), which connects a rotary telephone to a lump of earth and straw, reads today like a prescient, earthy comment on the information age.

Beuys also used appropriated and found objects as well as elements of performance for works such as “Ice Age” (1983), its elements including a silver-sprayed wood panel found at the factory of his friend, J.W. Froehlich, with the artist’s own handkerchief attached to the top. The piece then was transported in the trunk of Beuys’s VW Bug, with a small iron pipe and several pencil drawings of prehistoric shaggy mammoths added later as “anthropological graffiti.”

“The Prison (Cabir+Dactyl) 1983” is a steel-framed plexiglas piece with two miners’ carbide lamps hanging from a corner. The names evoke two metal smiths, magicians from ancient Greek mythology. “From the Machine Room, Trailer” (1977) presents a box filled with fat and felt (warmth and healing) as a honey pump.

The so-called blackboard drawings—“Spirit-Law Economics,” “Everyone Is an Artist” and “Kapital-Art” (all 1978)—are the outcome of one of Beuys’ most striking appropriations, in which the influence of Rudolph Steiner is palpable. Just as Steiner taught his philosophy by drawing diagrams in chalk on sheets of black paper pinned to the wall at the Goetheanum in Dornach, Switzerland (1919-1924), Beuys used a blackboard to illustrate his “anthropologic construct” for a better world.

During his long and productive career, Beuys helped introduce international audiences to conceptualism, concretism, Fluxus, live performance, site-specific installation and other ecological-experimental forms of art. He took up the torch of “art for the mind” from Marcel Duchamp and carried it forward, using symbolic narratives from his own survival of wartime ordeals, while radically challenging consumerist culture, materialism and instant gratification. He was an evolutionary revolutionary, teacher, funny man, shaman and poet. His message: Culture has the power to change the world (exhibit A: the 7,000 trees Beuys planted at Documenta in Kassel), and art is the only revolutionary power that can free humankind from repression.

Joseph Beuys expanded the notion of sculpture as social art, and his drawings comprise unified ideas worthy of discussion and action. More than 20 years after his death, he still energizes viewers with a desire to change the world as well as transform the way we look at the changing world.