What does a man taking a different drug every day for a week while drifting through Copenhagen in 1996 have to do with 500 men using shovels to move a mountain of sand just four inches outside Lima in 2002? Is one man spilling blue paint behind him from its punctured can during a 1995 dérive in Sao Paulo the same man trailing green paint out of another leaking can as he traverses a disputed Jerusalem on foot in 2004? And which of them leads a magnetic toy dog attracting bottle caps and metal scrap down the sidewalks of Mexico City, upon which he will later push an ice block all day till it melts, or breeze about with a cocked gun? 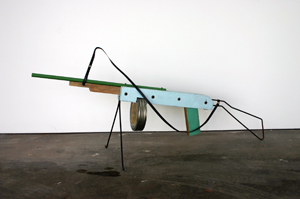 To compound these questions of pataphysical nonidentity, Francis Alys loiters with intent, wandering willfully between the opposed, yet apparently reconcilable poles of insouciance and rigor. Interviewed by Gianni Romano in 2000, Alys—a Belgian, and originally an architect—claimed that he became an artist out of curiosity, boredom, vanity, and a surplus of indefinitely extended vacations. More recently, however, he has stated that, “In many of the places where I have worked lately, the political component—although it is not the only one—is an obligatory ingredient in addressing the situation.” Perhaps this split position is best sketched in the title of his first solo show at David Zwirner’s: Sometimes Doing Something Poetic Can Become Political And Sometimes Doing Something Political Can Become Poetic.

Inside, countless full-scale wooden guns stand scattered about the doorway like hazards on an obstacle course or small pets yapping at our feet. Homemade from rubber pipe, plywood, and cardboard packing tubes, accented by subdued pastel hues of industrial rose and lime, their dominant tint is sand and desert “camo” olive. Each gun (including a number of crusader’s crossbows) is mounted with a reel of film. Open to interpretation, this is the power of suggestion. Answers count less than questions. Uncommon sense alone decodes Alys’ oeuvre. Are these witness weapons kin to our army’s own telltale video cameras once deployed at Abu Ghraib prison? Torture too is sometimes called “being put to the question.”

We do know that the film The Green Line Walk (2005), currently screened at Zwirner’s, explicitly documents Alys’ peripatetic paint-drip trip along the armistice boundary that Moshe Dayan drew on a map in green pencil after the Israeli-Arab war of 1948, marking what today is still the combatants’ only recognized accord. Asking, “How can art remain politically significant without assuming a doctrinal standpoint or aspiring to social activism?” and with a dividing wall now occluding the West Bank, Alys’ enigmatic gesture has the thought-provoking effect of Joseph Beuys’ proposal to incrementally raise the Berlin Wall.

But politics first is economics. My one reservation would just have to be, if Alys enlisted primarily students as volunteers to shovel sand against a figurative tide for his Sisyphean “Land Art for the landless” project, The Faith that Moves Mountains (2002), why not instead hire Lima’s nearby shantytown unemployed?

Doubtless, Francis Alys’ show adroitly addresses crucial social issues. While he has recently announced an intention to stop hiding behind “the ambiguity of metaphors or poetic license”, I must however highlight several small paintings also exhibited, which might otherwise have been slighted as mere subsidiary illustrations to his more politically committed Green Line Walk.

Exquisite smudged and faded oils on panel depict the holy city with its housing projects, bleak dividing wall, synagogues and mosques. Subtly executed in that same sand and olive drab, these unassuming “minor” works are aesthetically so finely attuned they remind us above all that Francis Alys is a peerless artist.

Kley imagines heaven, or at least an alternate realm, not as an aery cloud-filled firmament, but of geometric perfection and the comforting repetition of vegetal forms, rolling waves, and architectural detail.

The Phoenix and the Mountain: In-Centric Abstraction in the ’80s

The show includes seven artists and draws a tight focus on a particular line of painting from the ’80s that can be characterized by the artists’ use of geometric forms to generate or suggest narrative.