On a recent afternoon Justin Bond and I strolled through the Metropolitan Museum’s special exhibit, Glitter and Doom, German Portraits from the 1920s. Surrounding us were images of perseverance in the wake of war, of a people stabbing forward into the headwind of political and social change. “I wish I were in one of these,” Bond mused. In so many ways he is, having created a social barometer with his fictional lounge singer, Ms. Kiki DuRane. 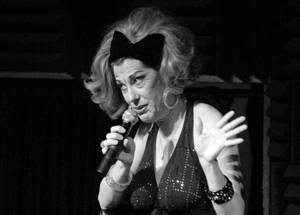 Along with professional partner Kenny Mellman, in the role of the perennially bemused piano accompanist Herb, Bond has been invoking the zeitgeist of Weimar Era cabaret, downtown punk rock and queer performance traditions for over a decade with their hilarious and poignant cabaret act, _Kiki & Her_b. The latest stop on their trail has led them to an ever-extending Sunday night residency at Joe’s Pub.

Heralded by Herb’s thick bass chords the septuagenarian Kiki arrives on stage spinning tales of a bungled life, stories of how she roped Herb, a “gay Jew ‘tard,” into a series of career misadventures. There was the torch-singer phase, the spoken-word album and the 1983 disco release. Failing miserably in every incarnation since their 1957 inception, the duo was constantly beaten back into obscurity, unrecognized and unappreciated. Add to this the numerous personal failures that befell the duo (a dysfunctional marriage, estranged children) and there’s no question why Kiki hits the bottle as hard as she does. Luck finally struck in the early 90s when the duo was tossed overboard from the Love Boat after Princess Cruise Lines cancelled their contract. “We hitched a ride on a pair of dolphins and we’ve been on the comeback trail ever since,” Kiki declares. The comeback trail is where fiction intersects with reality. From that point the path of the characters, as well as their creators, has led from the politically volatile queer performance scene of early-90s San Francisco to downtown New York venues such as Fez and Flamingo East, all the way uptown for a 2004 “farewell” concert at Carnegie Hall and a subsequent “resurrection” show two years later on Broadway.

“In the beginning there was so much rage,” Bond recalls of their early days in San Francisco. Bond and Mellman sprang from a particularly difficult time for queer performers, and performers in general, the NEA having just repealed four grants on the grounds of indecency. “I went to this Gay and Lesbian theatre festival in Seattle… you had Holly Hughes on these panels, victimized… and I was thinking, ‘surprise surprise that this administration doesn’t want to fund queer art. I mean, if they want you dead they’re not going to pay for you to make work that condemns them.’ ” It was at this point that Bond decided to dedicate his life to queer performance. And although the show clearly has roots in drag performance (Bond reverentially calls it the gay community’s Yiddish culture) queer art, here, does not necessarily designate sexual orientation. “Queer is a way of thinking, it doesn’t necessarily have to do with being gay or straight.” Queer implies a non-traditional approach to displaying underrepresented perspectives.

Bond and Mellman plugged on, bringing Kiki & Herb to New York and greater acclaim in the mid-90s. The ever-widening audience, including a six-month off-Broadway run at the Cherry Lane in 2003, served as a testament to the show’s accessibility. However, the demands of performing seven shows per week took a toll on the performers. “We just weren’t into Kiki & Herb then,” Bond explains. He came out of the experience declaring, “I don’t want to ever do a long run; I only want to do concerts.” When asked by the producers where they’d like to do a concert Bond responded, “Carnegie Hall.” “That was going to be the farewell show,” he says of their sold-out performance. Bond and Mellman separated for almost two years to pursue other endeavors, but like their tenacious creations, they resurrected.

“They came up with this crazy idea that we should do Broadway. I wasn’t going to say no,” Bond says. “It was a testimony to Kenny and my hard-headed determination, that we weren’t going to allow this ghettoization, in our minds, of our work… that we deserved to be on Broadway.” He follows this closely with, “I enjoyed what it said and what it meant… but these evenings at Joe’s I enjoy so much more.” It’s the freedom to improvise and the less demanding performance schedule that contributes to this view.

Relatively unscripted, and held intact with only a set list, Bond can allow Kiki the seemingly aimless ramblings that always seem to come full circle and deposit her at the beginning of a song. It’s here, in song, that Kiki reveals the energy that allows her to move forward. There’s something of an against-all-odds theme in the selections, and you can’t help but notice the ideas are applicable to the careers of Bond and Mellman. “You hear them in a new way, the way we interpret them,” Bond says. That interpretation involves crafting medleys that hop from Gil Scott-Heron’s The Revolution Will Not Be Televised to Wu Tang Clan’s Reunited, onto Eminem’s Lose Yourself before moving into Talking Heads’ Once in a Lifetime. You laugh when Kiki bellows, “When we first came on the scene, bitches were petrified!” but behind the laughter is an odd sense of empowerment. Refracted through Bond, then Kiki, the songs lose touch with their original creators. As if each song were an orphan, Kiki takes them into her care, delivering up something wholly new out of the borrowed. If Kiki’s stories are chronicles of demise then the songs are tales of deliverance and Herb always manages to catch Kiki with a song just before she becomes a victim to her story.

Victimization, death and resurrection have become something of a paradigm for Kiki and Herb. Beat down, the duo always manages to rise. There’s something of an against-all-odds nature to the careers of Bond and Mellman too. Never compromising the integrity of their show, the duo has managed to forge a commercial career with a seemingly non-commercial product. Perhaps it is the invincible spirit of both, the real and the fictional, attracting the audience. It’s as if Kiki were telling us: stand your ground; there’s a place here for all of us.

Kiki & Herb perform at Joe’s Pub, 425 Lafayette St., at 11:30 p.m. every Sunday night in March, and potentially beyond. For tickets and more info: www.joespub.com

An exhibition of 13 video works addressing today’s most pressing global concerns, Wandamba yalungka/Winds change direction, takes its title from the traditional language of the Waanyi aboriginal people of Queensland. The language is on the verge of extinction, spoken by only 16 people as of 2016. Expertly curated by Maura Reilly for the Performa website, the exhibition brings together an international and multi-generational group of artists.