Astaire’s high-stepping film routines, made his name in the late 1990s with his high-profile reimaginings of such balletic warhorses as The Nutcracker and Swan Lake. These restagings succeeded primarily because of Bourne’s ability to translate the classic ballets’ emotional claims into a contemporary idiom. What in other productions can seem dated or merely conventional comes off in Bourne’s hands with a renewed and revelatory vigor. For instance, the all-male Swan Chorus of his Swan Lake could have seemed a simple gimmick; but by creating a tragically repressed Prince Siegfried, Bourne makes the Swans awe-inspiring objects of desire and fear, like Rilkean angels (in these efforts, as throughout his career, Bourne is aided immensely by the sharp work of his longtime collaborator, set designer Lez Brotherston). 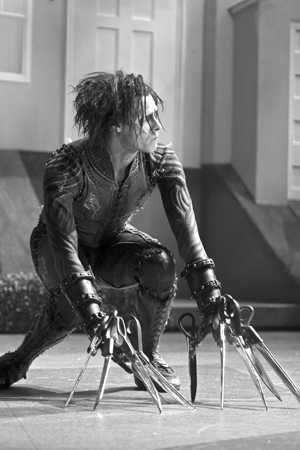 Swan Lake manifests many of the traits that have characterized Bourne’s subsequent work. Most vivid, perhaps, is the open and exuberant sexuality of Bourne’s dances. His bare-chested swans and finger-licking fairies emphasize that the male and female bodies on stage are charged with desire. Sex can be played for laughs, as it is in the campy overload of Nutcracker!, or it can have tragic consequences, as in Swan Lake. Either way, it remains a central and visible fact of contemporary life, as does the celebrity culture that Bourne frequently lampoons. The royals of Swan Lake, in an acknowledged parallel to the House of Windsor, are constant paparazzi targets; his Edward Scissorhands ends up on TV. Like his near-namesake Matthew Barney, Bourne often appears to straddle the line between critiquing a media culture of lavish consumption and merely participating in it. It is, at the same time, difficult to press such literally puritanical objections in the face of the sheer visual and kinesthetic pleasure of, say, the second act of Nutcracker! At his best, Bourne invests dance with the effortless glamour of Swinging London (the setting for his _Play Without Words _ ), while at the same time creating set-pieces that are almost novelistic in their psychological effect.

Bourne’s sensibility is as much cinematic as it is choreographic; his genius has more to do with narrative drive and visual spectacle than with exploring the bounds of pure movement. So it’s no surprise that he’s looked to film for direct inspiration, first to Joseph Losey’s The Servant (the basis for Play Without Words _ ) and now to _Edward Scissorhands . Both Bourne and Edward’s original director Tim Burton are necromancers of a sort, bringing seemingly exhausted cultural forms back to life. With its air of brooding melancholy and its pulpy backstory of a clockwork boy come to life, Edward Scissorhands _ fits securely into the late Romantic lineage of the classic ballet. It would not be out of place in a collection by E.T.A. Hoffmann, along with the sources for _The Nutcracker or )Coppelia_. The film’s soundtrack provides a further impetus. Danny Elfman’s long collaboration with Tim Burton has had its baleful moments, but his work on Edward Scissorhands is a rare accomplishment. Moody, delicate, and richly chromatic, Elfman’s score ably matches the dreamy precision of Burton’s visual style.

B ourne retains the film’s central issue: a collective inability to come to grips with the strange, in the guise of a leather-bedecked, lonely foundling with razors for hands. While in the film Johnny Depp as Edward was isolated both by his elaborate costume and by Burton’s use of cinematic space, often placing him in a far corner of the frame, Bourne contrasts the frequently motionless Edward with clusters of whirling suburbanites. Most of the characters belong at once to numerous groups, each with their own distinctive moves, such as the family units that emerge together from cookie-cutter dwellings early in the first act, or the young toughs who echo Jerome Robbins’s West Side Story. Even after his adoption by the Boggs family, Edward sticks out like a lanky, shock-haired thumb. As in Swan Lake, Bourne and designer Brotherston highlight Edward’s isolation by creating opposing visual spaces: here, the suburbs contrast with Edward’s native world of laboratory and graveyard. The graveyard, in fact, strikingly resembles the park in which Prince Siegfried first encounters the Swans. 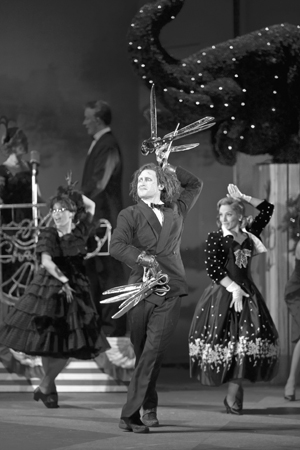 But Bourne and his co-scenarist Caroline Thompson make several significant departures from Thompson’s original screenplay. On the one hand, they give Edward’s creator a fairly trumped-up rationale for bringing Edward into the world. Edward owes his origins, we discover, to a terrible accident. His creator’s biological son, who has the unfortunate habit of playing with scissors in the rain, is struck dead by lightning. The grief-stricken father mourns his son by assembling a pasty-faced avatar and giving him scissors for hands. If this reductive explanation suggests some of the dangers inherent in the narrative focus of Bourne’s work, the fullest realization of the adaptation’s promise occurs at the first act’s close. A dreaming Edward leads Kim in a pas de deux, surrounded by a gyrating, faceless company of Edward’s topiary creations. His hands are no longer scissors. At once eerie and serene, this dance takes us momentarily out of the piece’s narrative into an altogether less familiar realm, in which simply having hands seems both miracle and cruel luxury. Even as the elegance of the topiary figures declares the eloquence of Edward’s bladed hands, which can bridge the natural and the human, their blankness rebukes the desire to reduce their wealth of movement to articulate meaning. For the space of a few minutes, _Edward Scissorhands _ brings Edwin Denby’s two forms of dancing magically together.

John Beer has written about theater for The Village Voice and Time Out Chicago.

Jonathan Hoover may have started his Instagram account @inappropriatepatti for kicks—when you have the singular ability to parrot Broadway legend Patti LuPone, why not share it with the internet? But a talent for mimicry, like his booming account, has evolved into something greater: a source for comedy in dark times, and more importantly the vehicle for raising funds for justice. Here, Cam Cronin dives into the person and persona of Jonathan Hoover and how artistry is inextricably tied to activism.

“The greatness of America lies not in being more enlightened that any other nation, but gathering in her ability to repair her faults.” –Alexis de Tocqueville

Camille A. Collins: The Exene Chronicles

While offering a slice of punk rock nostalgia around influential punk band X and frontwoman Exene Cervenka, the book also explores racism, sexuality, and the ways society often positions young women as transactional commodities with their worth based on their whiteness, their appearance, and their ability to please men.