Rob Sheffield, Love Is a Mix Tape: Life and Loss, One Song at a Time (Crown)

Pop-music geeks are fickle, hyper-opinionated boys and girls whose idea of a good time is endlessly debating such heady topics as, What’s the best Smiths album? Is the new Joanna Newsom record enchanting or embarrassing? Is it really better to burn out than to fade away? Who’s gonna buy the next pitcher? Fortunately, there’s one thing we can agree on: We all love our mix tapes. In the pantheon of pop-music geekdom, the humble mix tape towers in stature above our bootlegs, our old fanzines, even our rarest seven-inches. To outsiders, mix tapes might simply appear to be randomly assembled songs transferred from CD (shhh—don’t tell the RIAA) or radio onto a run-of-the-mill C-90. But we music nerds know they’re actually personal histories, diary entries in cassette form. Anyone who’s ever taken the time to make a mix tape (or even a mix CD, I guess, although I still say that’s kind of cheating) invariably has some powerful memories embedded within its whirring wheels and plastic casing. 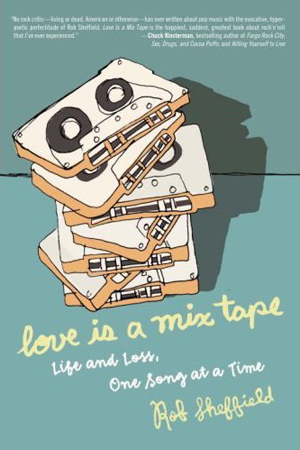 In his new memoir Love Is a Mix Tape, pop-music geek Rob Sheffield, a contributing editor at Rolling Stone, writes, “Every mix tape tells a story. Put them together, and they add up to the story of a life.” Love Is a Mix Tape tells the story of Sheffield’s life with Renée Crist, a fellow music geek whom he met in 1989 in a Virginia bar—they bonded over their mutual love of Big Star—and married two years later. A scant six years after that, on Mother’s Day 1997, Crist died, killed by a pulmonary embolism at the age of thirty-one while Sheffield was preparing lunch for her in the other room.

The book’s title comes from its overarching narrative device: Each of its fifteen chapters is yoked to one of the scores of mix tapes that Sheffield has made or otherwise accumulated over the years. It’s a nifty gimmick. I loved parsing the tapes’ tracklists, which preface every chapter. There’s lots of Liz Phair and Pavement and Yo La Tengo (it was the gimme-indie-rock ’90s, remember), but they’re counterbalanced with judiciously administered doses of eclecticism. One tape’s side B starts with Fleetwood Mac and proceeds toward Abba, Outkast, and then Hüsker Dü before settling on the Stones’ languid “Waiting on a Friend.” Great song—a perfect mix-tape finale. And when the music’s over, flip to the other side.

Sheffield, 40, rediscovered all those old tapes in 2002, after moving to Greenpoint from the Financial District. In his old Manhattan pad, he had barely enough room to stretch out his 6’5” frame, but his Brooklyn apartment is more spacious, affording him the previously unheard-of luxury of unpacking his stuff. There’s a china cabinet built into one of the apartment’s walls, he told me recently, and while moving in, “all I could think of was: Oh my God, a place for all my tapes.” Sheffield began sorting through those tapes, organizing and shelving them—and, of course, playing them.

Memories came rushing back with the music, because that’s what old mix tapes do. “It was really scary how much of my life was in these tapes,” Sheffield said. Inspired, he began to write about the tapes and Renée and their time together as a broke married couple living in Charlottesville, Va. Before meeting her, Sheffield writes, he was “just another hermit wolfboy, scared of life, hiding in my room with my records and my fanzines.” Love Is a Mix Tape is a book for any shy boy who’s ever been blessed with the utterly baffling miracle experience of being led by the hand into a much cooler girl’s “noisy, juicy, sparkly life,” as Sheffield puts it. It’s also an unabashed tribute to those cool girls. In one of Love Is a Mix Tape’s most touching moments, Sheffield declares that his late wife was his “hero.”

S heffield has been writing a pop-culture column throughout his decade-long tenure at Rolling Stone; it’s currently entitled “Pop Life,” although I also recall reading it under the names “The Sheffield Report” and “Pop Eye.” The focus of the column, he told me, is “whatever trash I’m obsessed with at the moment,” which typically means headline-grabbing pop sleaze, stuff like celeb hook-ups and breakups, Britney Spears’ tabloid beaver pics, and the reality show Project Runway. The tone of “Pop Life” is never as apolitical or reverent as, say, a typical Chuck Klosterman piece, which is a good thing. But too often the column wanders over to the wrong side of the snarky/witty divide. You really have to care a lot more about pop sleaze than I do to enjoy it.

Sheffield’s CD reviews, though, are another matter entirely. They’re funny, sharply written, authoritative, passionate and incisive—and given the Stone’s drooping word-count rates in recent years, that’s no small accomplishment. His best stylistic trick is to brazenly crib song lyrics wholesale and insert them into his own writing. Often he does this just for yuks, but every now and then he manages to recontextualize the lyrics, bending them to fit his own narrative purposes. In Love Is a Mix Tape, Sheffield teases out comedy from the Notorious B.I.G.’s menacing mumble, and somehow extracts profundity from Hanson’s “MMMBop.” Elsewhere, he drops quotes from Sleater-Kinney, Nirvana, even Poison (“We were just a couple of fallen angels, rolling the dice with our lives”). Love Is a Mix Tape is a mix tape.

O ne of Sheffield’s major strengths as a critic is his total unwillingness to distinguish between “high” and “low” art. He provides a refreshing dose of sanity in a prevailing rock-crit culture that says earnest white guys with guitars (and sometimes black guys who rap about cocaine) make, like, real music, and everything else is just for fun. In Sheffield’s view, Missy Elliot is at least as good a musician as Thom Yorke, and probably even better; her music’s more fun, after all. As a self-proclaimed “ride-or-die slut for the secular, tawdry, carnal, and promiscuous vitality of the pop world,” Sheffield hangs on to the pleasure principle as if it were a life-preserver. Consequently, he writes with the least snobbish tone of any rock writer out there.

As a critic, Sheffield is primarily interested in music as it actually functions in people’s lives, as a vessel for retaining emotional or even sentimental experiences, not necessarily as Art to be judged with cold-eyed, Christgau-ian objectivity. In Love Is a Mix Tape, Sheffield opines that “all songs should be either fast or sad.” That’s because those songs most easily correspond with life’s big moments: fast songs for the happy parts, sad songs for the sad parts. David Bowie’s “Five Years” may or may not be a “good” song, but that’s not the point. What matters to Sheffield is the specific memory the song holds in his mind: drunkenly shouting out the lyrics with Renée on their fifth wedding anniversary. “Five years,” they and Bowie sang. “That’s all we got.”

E arly on in Love Is a Mix Tape, Sheffield writes, “’Twas bliss in that dawn to be alive, but to be young and overworked and underexposed and stuck in a nowhere town was very heaven.” He’s talking about the experience of living in Charlottesville during the ’90s, when gas prices were low, the federal budget overflowed, and personal freedom was on the march. “If you didn’t like your job, you quit your job and got another one,” Sheffield told me as I shook my head enviously. “Or you just quit and freelanced for a while. That was, like, unbelievable.”

Not coincidentally, the worlds of pop culture and music exploded and expanded, Big Bang–style, during the ’90s. Sheffield and Crist reveled in that environment. Love Is a Mix Tape’s first half is an avalanche of joyous anecdotes: bumming around with music-geek pals at the local sushi joint–cum–rock club, knocking back bottles of the electric purple Zima-and-Chambord cocktail Renée invented, going to see Pavement for the first time, road-tripping through South Carolina while singing along with the piano solo in Skynyrd’s “Call Me the Breeze.” Then Renée dies, and the book’s tone shifts. Robbed of his noisy, juicy, sparkly companion, Sheffield plunges into grief. Love Is a Mix Tape’s most resonant moments come during its post-death chapters, as Sheffield recounts all the awkward exchanges with old acquaintances, the table-for-one meals at dreary chain restaurants, the long nights on his back porch miserably chain-smoking. And, of course, listening to his mix tapes, which never again sounded quite the same.

I asked Sheffield if it was difficult to write about those memories. “Man, it was harder than I thought it would be,” he said. “Remembering this summer—I usually prefer not to remember this summer, you know?” But he forced himself. Hearing the old tapes helped bring it all back home: the memories of Renée and of his grief, the feelings of sorrow and anger. Sometimes, Sheffield said, he would catch himself writing about Renée’s death from a serene, detached, shit-happens point of view. Then he’d dip into his tapes, and “go right back to being pissed. It’s weird how you hear stuff like, ‘Things happen for a reason.’ It’s really funny. Some things just suck, you know?” Anger creeps unmistakably into his voice.

There’s anger in Love Is a Mix Tape, too. But on the whole, Sheffield’s book is so funny and sweet and touching that the anger is overwhelmed, defeated. This book is a literal triumph.

Whitehead’s newest novel The Nickel Boys, is a realistic depiction of another era in African-American history: the post Jim Crow era in Florida, and it’s set primarily in the 1960s and 1970s.