Eugene Mirman’s unruly mop of black hair was in a more chaotic state than usual as he prepared for his semi-regular “Eugene Mirman and Friends” comedy night at Union Hall in Park Slope. The heavyset comedian, slouching characteristically, was on his cell phone, attempting to track down a few boxes of cookies and croissants he’d left in his apartment. He would later pass them around to the audience during the evening’s performance. This wasn’t just a sign of Mirman’s appreciation for free snacks, but also a testament to his experimental style of performance comedy. 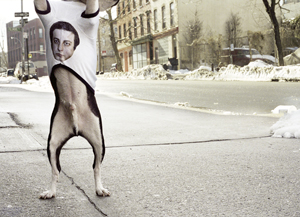 On top of offering the occasional cookie, Mirman’s performances always include some of his ultra-short films, which blur the line between sketch comedy and stand-up; real-identity and over-the-top character. They generally feature Mirman addressing the camera. He picks a topic and, as an absurdist caricature of the real Eugene Mirman, riffs on it. As Eugene the “Sexpert,” he informs us that “women love danger—if they could, they’d just date a fire.” As Eugene the mouthpiece for the Drug Council of America, he gravely explains, “Some of the shit marijuana does—we had no idea. Pot doesn’t just kill the person who smokes it. It kills everyone within a mile around.” His self-aware delivery communicates the sheer absurdity of everything coming out of his mouth.

Some of the things that come out of Mirman’s mouth, however, aren’t absurd at all. Off camera and off-stage, he’s every bit the gregarious, quietly intellectual, self-proclaimed weirdo he appears to be. If pushed on the avant-garde overtones implicit in making a three-minute long video in which he claims to be a robot that can “fuck at one thousand fucks per second, per second,” he’ll concede that there’s something to it. However, his style’s not driven primarily by an experimentalist urge; rather, it’s a will to entertain. “It’s not like I say, ‘I’m going to teach these people that they can truly enjoy avant-garde cinema and low-fi video,’” says Mirman. “The driving reason for it is that it works, and that shows.”

In the burgeoning world of web-video comedy, what “works” and what is inscrutable, weird, and infectiously memorable, are one in the same, much to the delight of those whose idea of hilarity is less Jay Leno and more André Breton.

It was around 1999 or 2000 that Mirman, who studied film and comedy, decided to throw a few short films on his personal webpage. Mirman was a recovering computer nerd working at a web design firm, where he used his technical know-how to create “The Marvelous Crooning Child,” an animated baby that inexplicably sings indie-rock and pop songs. The short films he posted were no less weird, featuring spliced together non-sequiturs that make him come off like a postmodern Henny Youngman. Mirman’s videos began circulating on nerdy Internet meme sites then in their infancy, like Ebaumsworld and Something Awful—and his comedic career was set in motion.

His short films pre-figured the importance of viral video and its capability of drawing in viewers by a solid half-a-decade. He’s not the type to accept a title like “Viral Video Vanguard,” but the specifics of Mirman’s shtick suggest that he intuited, early on, the potential of web video.

T oday, the Google-owned YouTube and the Rupert Murdoch-owned MySpace are inextricable parts of daily life. Despite legitimate fears of online corporate consolidation, these new options for DIY distribution are helping to democratize comedy and change what it looks like.

But it’s not just the method of distribution that makes comedy like Mirman’s proliferate so successful online—it’s the fact that certain kinds of comedy, the kinds that don’t quite make sense, make sense for an online audience. “With the Internet,” says Mirman, “you can put something out there and people can find it, and it can become part of their pop culture canon.” What counts as funny these days is often that which people can grab onto, quote, and disseminate.

Even the distinct look of Mirman’s no-budget movies forecasted a certain mise en scene that’s now a familiar part of the viral video landscape. In the last year or so, watching a video blog produced from a low-quality web cam has become a ubiquitous online experience. The appeal of seeing an average person opine from her bedroom is what allowed indie filmmakers Ramesh Flinders and Miles Beckett to unleash their LonelyGirl15 prank. The prank featured an actress posing as a teenage girl, sharing the harrowing, weird tales of her so-called life. It grew wildly successful, as YouTube addicts scrambled to figure out if it was real, and if not, what exactly it was. The two creators hit on something that Mirman stumbled upon years earlier—homemade looking wierdness is an online attention grabber.

Not surprisingly, the comedic mainstream is starting to pick up on the idea. Look no further than Saturday Night Live to see how the aesthetic of online comedy is changing the look and feel of humor outside of cyberspace. The “Sloths” skit, from a recent SNL episode, is a so-so attempt at the type of humor that plays well with Internet audiences. A mock commercial for the Staten Island Zoo’s sloths exhibit features a barrage of quick cuts and a song espousing the animals’ virtues in a list of non-sequiturs. Sloths, we learn, will “Hire a dog to burn down a hospital,” and “Eat cocaine off America’s gravestone,” (presumably because censors won’t let you snort cocaine, only eat it).

The attempt at being absurd is strikingly close in concept to Cox and Combes’ hilarious viral ode to George Washington, who according to that song “had a pocket full of horses” and “fucked the shit out of bears.” The Sloth skit seems more than a little forced, compared to the real DIY weirdness you find online coming from maniacal minds like Mirman’s.

In the last year, a few of Mirman’s video excursions have made it to CD. En Garde Society! is Mirman’s second disc, his first one for iconic indie label Sub Pop. Then there’s his tour with Stella and his opening slot for bands like Modest Mouse and Yo La Tengo. He appeared in an episode of Adult Swim’s absurdist cartoon Aqua Teen Hunger Force, is writing what he calls a “Guide to Modern Living,” and his brand of net-friendly surrealism will soon find a home on Internet television. The much talked about broadband Internet channel for Turner Entertainment will feature Mirman doing what he does best—being weird in short explosive bursts—in a sci-fi themed talk show with five or six minute episodes: proof that Mirman’s particular combination of the bizarre, the elevated, and the undeniably ADD, could very well be the comedic face of new media.

“It’s kind of great,” says Mirman, “because there’s this new format where you can make like these five or six minute things that people consume, and the responses are like, ‘That’s funny, keep it weird.’”

Mirman tries not to let down those who want it kept weird. Holding a glass of whiskey in one hand, he stands offstage downstairs at Union Hall, watching the performance of AD Miles, the swaggering red-headed star of Comedy Central’s short-lived Dog Bites Man. Miles makes a joke about impregnating his former roommate with a turkey baster, Pink Flamingos style, and Mirman’s unmistakable guffaw punctuates the crowd’s laughter. The odd mixture of booming sonorousness and trebly nasal that always accompanies his one-liners also comes through when he likes a joke.

But Mirman takes on an entirely different demeanor moments later when he debuts one of his new videos. He paces, watching for reactions, and looks like a gleeful kid when the crowd responds to one of his insouciantly delivered on-screen absurdities. If a line works for bar patrons, it’ll spread throughout the web. If a particular one-liner is superlatively quotable, it will probably end up being recited back to Mirman by a random fan as he walks down the street.

Is the face of comedy as we know it getting decidedly weirder because of this? It seems to be happening, at least a little. Will your average television viewer of the future be keeping abreast of the most oddball Mirman-esque memes imaginable? That’s a little less likely, but demanding a renaissance in television might be missing the point of what’s going on with online comedysss.

“A lot of people wonder, ‘Will this thing become the mainstream?’” says Mirman, “and sure, it might, but what’s almost better than that is it no longer has to. The point of no longer having three networks with seven shows each is that there are tons of niche worlds. If you have 500,000 devoted fans across the world you’re probably fine, meaning you don’t necessarily need to be on The Tonight Show. You can have this weird sort of niche world where you make things for the web, and as long as it connects with people, it works.”

Matthew Stern is a writer who lives in Park Slope.

As democracies rise and fall globally, so have endless crises of economic and social inequalities, ecological catastrophes, and forms of corruption as a result of personal greed and self-interest (not well-understood), which have allowed national conversations to be exploited by tyrants. Ours is no exception.

from Waiting for the Waters to Rise

by Maryse Condé, translated from the French by Richard Philcox

Maryse Condé’s Waiting for the Waters to Rise begins in her native Guadeloupe but is ultimately a novel that centers on statelessness. The three characters at the novel’s heart—Babakar, Movar, and Fouad from Mali, Haiti, and Palestine respectively—are all migrants driven from their homelands. Condé is a master storyteller capable of traversing multiple countries with their own histories of colonialism and political violence so that we come to know each character more intimately and why the friendship they forge is so vital to their survival.

What a year 2022 has been, and what have we learned? Should we ask again how fragile the nature of being human is?