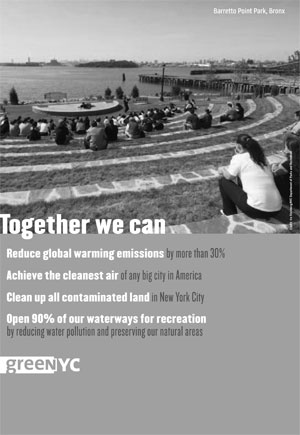 Sonia Guadalupe and her son Eric live in a fourth floor apartment overlooking the Bruckner expressway in the Hunts Point section of the Bronx. The tidy apartment’s walls are hung with mirrors. Family photos rest on the TV and two blue sofas sit untouched. Hardwood floors and glass tables glint from the light coming in through the windows. That’s because Sonia is always cleaning. She dusts several times a day just to keep up with the dirt that creeps in from the roadway.

On a recent October afternoon she stood cooking pork and yuc==a on the stove while Eric sat fidgeting at the kitchen table. Sonia, a tall thin woman in her early forties, was born and raised in the South Bronx. When her parents moved here from Puerto Rico in 1952, there was no freeway. Now the Bruckner cuts through the heart of their neighborhood. The drone of passing cars on the expressway outside the apartment is a constant reminder that air pollution is never far. 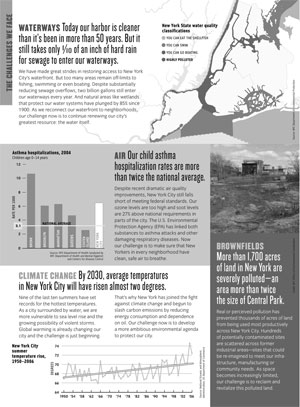 Like her neighbors, Sonia sucks down the dirty air. But Sonia, who smokes, has felt little impact so far from some of the most polluted air in the City. Eric has.

Diagnosed with asthma at six months old, the wheezing in Eric’s chest is perhaps one of his earliest memories. But for 13-year-old Eric, his asthma is something he’d rather forget. And he usually does, until he wakes up at 4 a.m. or starts coughing while playing basketball with his friends. In the winter, the bitter cold keeps him home from school. And summer’s hottest days find him hunkered down in his room under the cool breeze of the air conditioner.

Sitting at the kitchen table, Eric says he doesn’t know why he has asthma.

“Honestly, I’m going to tell you it’s the area,” says Sonia. “This area has a high risk of asthma because of the smoke that comes out of the truck traffic.”

National air standards, first put into law with the Clean Air Act of 1970, have helped to reduce air pollution across the nation—even in the Bronx. But inadequate enforcement and monitoring loopholes have enabled the air pollution to continue to adversely affect public health. Children like Eric are still getting sick.

In 2006, New York’s air pollution was among the worst in the country, and New Yorkers suffered the consequences. From asthma and emphysema to lung cancer and cardiovascular disease, thousands got sick (or sicker). According to the Environmental Protection Agency (EPA), 68 residents per million are at risk of getting lung cancer from air toxins in New York, compared to the national average of 41 per million.

According to the New York State Department of Environmental Conservation (DEC), most of the City’s air pollution comes from its streets. The majority of this pollution is coughed out of tailpipes. But a bevy of sources, from power plants and refineries to boilers, auto repair shops, diesel generators, and landfills, add to the collective fog. Finally, unregulated shipping and airline industries in the area pollute massively, according to scientists at the EPA and the DEC.

Most of New York’s hotspots are the result of massive infrastructure projects, like the Bruckner, whose ill health effects mattered little when built. In the South Bronx, highways and diesel truck traffic take a heavy toll on neighborhood health. In Queens, power plants, airports and highways concentrate pollution overhead. In Brooklyn’s Sunset Park and Williamsburg, residents inhale the fumes from the heavily used freeways nearby.

Among other pollutants, New Yorkers are inhaling ozone and particulate matter (PM), which cause the most damage to health. According to the EPA, ozone causes respiratory irritation, reduces air intake and creates shallow breathing. It can aggravate asthma and inflame and damage the lining of the lungs. It may worsen emphysema and bronchitis, as well as reduce the immune system’s fight against lung infection. PM can irritate airways and cause coughing and difficulty breathing. It decreases lung function, aggravates asthma and can cause chronic bronchitis. It can also cause irregular heartbeats and nonfatal heart attacks, and it can bring on premature death in people with heart or lung disease.

“People can die of a heart attack from air pollution and never cough once,” says Doctor William Beckett, a professor of environmental medicine at the University of Rochester.

The American Lung Association, which grades locations according to air quality, gave Manhattan, Queens and the Bronx an F in its annual State of the Air report. Brooklyn and Staten Island faired nominally better with Cs. The study reported that 1.4 million New Yorkers with cardiovascular disease live with unhealthy levels of particulate pollution, and 460,000 adults and 160,000 children with asthma in NYC are exposed year-round to high particulate pollution.

As for Eric, he knows little about the specific data. He just knows he feels his lungs constrict as if a fist-sized rock is pressing on his chest. He just knows that he relies on his inhaler to breathe. When his asthma is really bad, the only thing that will open up his airways is at the hospital. Sometimes after failed treatments of his misting machine, Eric walks down the steps of his apartment building and gets in the back of the ambulance with his mother. With an oxygen mask over his face, he waits until they get to the hospital. But he doesn’t feel real relief until, sitting upright on a hospital bed, the syringe of prednisone punctures the skin of his arm. Then the steroid opens his lungs, and he can breathe again.

While there are numerous health effects associated with air pollution, the most obvious is asthma. In 2004, according to the New York City Department of Health’s latest figures, 26,495 people were hospitalized for asthma attacks. The highest numbers were in neighborhoods associated with heavy diesel pollution.

“The gray area is that a specific facility [a factory, a freeway or an airport] is hard to pinpoint. That’s one of the loopholes. It’s hard to say that ‘x’ number of cases of asthma and cancer are caused by specific facilities,” says Ramon Cruz, a policy analyst with Environmental Defense.

A recent study of PM exposure in school children in the South Bronx claims otherwise. The study had children—including Eric Guadalupe—carry backpacks with air monitors attached to them that tested for elemental carbon, which is associated with diesel pollution, high in the South Bronx. “This study really nails down the relationship between diesel soot and asthma severity in these children,” says George Thurston, a professor of public health at NYU and director of the four-year study. “And also it’s been done right here in the South Bronx. So we’re showing that this isn’t just some theoretical relationship between pollution and asthma.”

Behind a wooden door on the second floor of a building on Kelly Street in the Longwood section of the South Bronx, a DEC air monitor station hummed away. Calibrators and computers filled most of the small room. Glass tubes and white plastic pipes led in and out of the room, funneling air to and from the street outside.

Sergio Fleishaker, a DEC technician, was checking each machine. Watching him were Ed Marion, a supervisor, and David Wheeler, the environmental engineer for the DEC’s Division of Air Resources.

The DEC’s monitoring system is meant to pick up the “average” air quality, according to Wheeler. Since anything from construction to wildfires in Canada can throw off the monitors, they are calibrated to calculate a regional average. “You can’t just grab a hold of the air and cut everything out,” he says. “It’s not a precise science. We are looking to capture air as it moves across the area.”

The site in the Bronx is one of the DEC’s 28 monitoring stations in the City and is part of a nationwide network that acts as the EPA’s eyes and ears on air quality. This network, the result of the Clean Air Act, directly informs the policies that protect air quality in the United States.

For many of the scientists studying air quality across the country, the DEC’s monitoring system presents limitations. The network wasn’t designed to monitor for specific locales, so it misses what people like Sonia and Eric Guadalupe breathe everyday as they walk the streets of the South Bronx.

“The monitors are in the right place for regional particulate mater, but not for localized monitoring, that’s the problem,” says Patrick Kinney, associate professor of environmental health at Columbia University. The monitors work fine; but they don’t capture street-level air pollution since most are on top of buildings. “It’s just not telling us the whole story,” he says.

On October 16, with the groaning Bruckner Expressway to his back, Congressman Jose Serrano stood at a lectern on the corner of Hunts Point Avenue and 165th street, TV cameras aimed in his direction, a crowd looking on. Serrano was there to announce the completion of Thurston’s air pollution study. As he spoke, buses passed by, dump trucks belched exhaust, and semis honked their low horns. In the small crowd nearby, Sonia Guadalupe stood listening to Serrano. Eric stood behind the Congressman on stage.

“Let me, in a somehow bizarre way, apologize to the members of the media for all the noise,” began Serrano. “Herein lies the problem that we are speaking about,” he continued, motioning to the freeway behind him. “This four-year study proves that there is a direct link between truck traffic and its soot and asthma in the South Bronx.”

Not long after the Congressman, Alexie Torres-Fleming of Youth Ministries for Peace and Justice took the microphone. “So you’ve heard that common sense is never going to fail us. The truth, as in this case, is often right under our noses, and all we have to do is pay attention,” she said. For years, she added, “the soot-blackened trucks stuck in traffic, the buses, the cars and the climbing asthma rates told us that something toxic was brewing in the South Bronx. We sensed something was wrong but we needed science to help put our fingers on it.”

Meanwhile the Guadalupe household still sits facing the traffic less than 100 yards away. As for Eric, his asthma continues to keep him up at night. On a recent winter Sunday, Sonia was up with him until dawn. He had been in bed all night, wheezing.

Jonah Owen Lamb is a New York City-based writer born on a boat in Sausalito, California, a small town on the north side of the Golden Gate Bridge.

Bronx Calling, the fifth iteration of the Artist in the Marketplace (AIM) Biennial at the Bronx Museum, is unique in that it passively presents artists working at their own pace rather than proselytizing a curatorial vision of the contemporary scene. The 68 artists included in this hefty and deep exhibition participated in the 2018 and 2019 AIM programs.