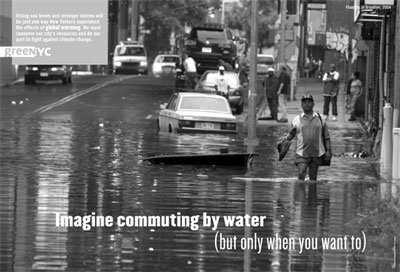 From plaNYC, the city’s recent brochure about global warming.

Sophie B., sporting black curly hair and a heavy layer of make-up, said, “You have to pray and do the rosary to prevent global warming. We have zero influence on what’s going to happen. Take the Tsunami. Bad people live over there. Like, people in New Orleans were punished for all the prostitution, the gays and the lesbians. God doesn’t like that. So if the flood is going to come, it’s not from what we do.”

I walked out of Sophie’s cramped little real estate office on Bedford Avenue backwards, as she continued speaking. The reason I approached Sophie about global warming was that Allstate Insurance has refused to renew 4% of its homeowner policies in the eight counties of Downstate New York, including New York City. In Allstate’s press statement from February 2007, the company declares Downstate New York a catastrophe-prone area. It speaks of the terrible destruction recent hurricanes have caused, and the company’s mission to fulfill the promise it made to its customers.

Not unlike Sophie, Allstate New York’s spokesperson Krista Conte refused to connect homeowner policies, hurricanes and rising sea levels with global warming. “I don’t know anything about global warming,” she said repeatedly over the phone. “Certainly what we learned in the 2004 and 2005 hurricane seasons was a factor in making this decision, but we haven’t made a connection between those hurricane seasons and global warming.”

I am certainly not the only person who has made that connection. Last month the Mayor’s Sustainability Advisory Board issued a new brochure on global warming (high-gloss brochures seem to be all the rage in city agencies). This one is quite different from the Take Good Care of Your Baby brochures of the past. It carries an almost apocalyptic message. The cover asks, “By 2030, will you still love New York?” in thick white lettering. “It’s up to you,” it weakly adds in smaller white print. Over the next 25 years, we will be getting BIGGER, our infrastructure will be getting OLDER, and our environment will be at AT RISK, the brochure adds in arbitrary capitals.

There are pictures of a congested Times Square, of brownfields and of people wading through water during a flood in Brooklyn in 2004, but no suggestions of what YOU and I can do, nor information on how exactly the city will combat global warming. How is New York City preparing for the flood to come? And WHAT exactly is all up to me?

The NASA Goddard Institute for Space Studies, a unit of the Columbia University Center for Climate Systems Research, explores how the continuing rise of the sea level might affect New York City. According to a brief by Dr. Vivien Gornitz, a scientist from the Institute, the sea level has risen much faster in the 20th century than in the previous few thousand years, and the sea level around New York City has been rising at even bigger increments than the global average. During the 20th century alone, it rose 15 inches, and it could accelerate even more due to the rapid melting of ice sheets and mountain glaciers.

Scientists agree that most of this sea level rise comes from the warming of the oceans, which is primarily a result of the emissions of carbon dioxide and other greenhouse gases. According to a recently released report from the Environmental Advocates of NY, 24% of all greenhouse gases in New York are released by power plants and 32% by cars and trucks. A comparably low 16% are released by residents.

History has shown that it’s not just hurricanes that can cause major damage. In 1950, a major storm flooded the runways of La Guardia Airport with ocean water. And during a Nor’easter in December 1992, salt water cascaded down the entrance to the PATH train station in Hoboken causing New Jersey Transit and the New York City subway system to short-circuit, and stranding trains beneath the Hudson River. Photos of the storm event show cars drowning on the FDR Drive.

But by far the greatest damage was caused when a hurricane category three swept over New England, New York and Long Island in September 1938. Known as the Long Island Express, the hurricane killed between 500 and 700 people and caused several billion dollars in damage. “Most of the damage was farmland,” Gornitz said. “But if the same hurricane would strike today, it would be an absolute disaster. With the rising sea level, the flood levels would be greater. The population has increased and the degree of construction has increased. And how are you going to evacuate all these people?”

“How are you going to evacuate New York’s more than eight million residents?” I asked Andrew Troisi, a spokesperson for the Office of Emergency Management (OEM). Troisi said that according to the OEM’s estimates, 600,000 New Yorkers would need to be evacuated. “After Katrina we undertook a major revision of our hurricane plan. Given the death and destruction that all Americans were able to see, we think that if a hurricane hit New York and an evacuation order was given, most people would in fact evacuate.”

The OEM has not only dramatically increased the amount of brochures—seven so far—that advise seniors, small business owners, pet owners, and so on, how to behave in emergency situations. It has also increased the number of evacuation centers. Its colorful online map is sprinkled with countless red dots, indicating the evacuation centers in the safe parts of the city.

According to the map, about half of Brooklyn and almost all of Downtown Manhattan could be inundated if a hurricane category three struck. But even after a category one hurricane the flood damage could be substantial; parts of the Rockaways, Coney Island, and all of the Battery would be affected. The OEM’s estimate of 600,000 evacuees in case of a hurricane level three seems awfully low.

Asked how an evacuation would be accomplished, Troisi told me: “It involves the Fire Department and the MTA as our partners.”

MTA spokesperson Sam Zambuto seemed unaware of this partnership. When asked about the MTA’s role and position regarding floods, rising sea level, and disaster prevention, Zambuto stumbled. His voice grew smaller and smaller, and after taking down my questions and my email address, he hesitantly asked me to send him the NASA report on global warming and the new brochure issued by the city. His request did not make me feel very safe. I’m still waiting to hear back from him.

I went to a local firehouse to talk to the firefighters about their role in case a hurricane hits the city. “We make sure our apparatus is ready. That’s all we can do,” said one firefighter who asked not to be named. “We don’t have boats,” he added. “It’s just like in New Orleans. The people who don’t have cars and money won’t get out. Today the city is more concerned about terrorism.” He went on to explain that fire trucks cannot go through water more than three feet high. If the truck goes through water for longer than 2 minutes, the apparatus short-circuits.

“So is there a plan?” I asked. “I don’t think so,” he responded. “You’d think the city would learn from New Orleans. There was a plan but it didn’t work. They’d have to tell us what their entire plan is.”

The only person I talked to who does have an ingenious plan is Professor Malcolm Bowman, head of the Stony Brook Storm Surge Research Group at Stony Brook State University of New York. Unfortunately, the city has not paid much attention to Bowman’s plan. His group is still looking for a political “champion”—someone high up who is willing to support the project.

To protect the city from flooding, Bowman’s group proposes the construction of three storm surge barriers and dikes on the Rockaways. The barriers would be placed at the Narrows (by the Verrazano Narrows Bridge), at the mouth of Arthur Kill (on the Southwestern tip of Staten Island), and at the upper end of the East River. During hurricanes or threatening Nor’easters, the barriers would be closed to stop the surge. At other times they would remain open to allow ship traffic to pass through.

Bowman’s team based its proposal on existing European models. “The Netherlands have a tremendously strong government department [just for coastal protection],” said Bowman, a New Zealander with a thick white beard. “They have the best hydraulic engineers in the world. They take it seriously, but we don’t here.”

The Netherlands’ Delta Works project, a series of dams, dykes and storm surge barriers, was built between 1953 and 1997. London’s Thames Barrier was built between 1974 and 1982. In both countries, the construction of barriers was instigated after the devastating North Sea Flood in 1953. Some thousand people and tens of thousands animals drowned in England and the Netherlands during the flood, and large parts of the countries’ construction, farmland and infrastructure were destroyed.

To illustrate how the barriers would work and what they would look like in New York, Bowman pointed to the existing models in the Netherlands and England. The Oosterscheldekering in the Netherlands, for example, consists of concrete pillars connected by giant steel doors. The doors are usually open but can be closed in case of an approaching storm. The Thames Barrier, which was built across a 572-yard-wide stretch of the river to protect London from floods, consists of six half-cylindrical floodgates that can be rotated for underspill and maintenance.

The construction of storm surge barriers in New York would demand a collaboration of many state and city government agencies. The barriers would take seven to ten years to be built and would cost several billion dollars. (As a comparison, the Thames Barrier cost around £534 million back in the 80s.) But Bowman thinks this expense would be well worth it—before disaster strikes. After all, the damage of hurricane Katrina is estimated to have cost the government some $200 billion dollars and counting.

“Is the city prepared?” I asked Bowman, anticipating his answer. He paused. “No it isn’t,” he said. “Everybody keeps their fingers crossed and hopes for the best.”

So keep your fingers crossed and your Go Bag ready! Not sure what to pack? Thankfully, the Office of Emergency Management added a brochure introducing the Go Bag to its “ever-expanding suite of products.” And let’s hope that the shuttle service that connects Rockaway Park to the rest of the world will run more frequently by the time the hurricane hits. If not, just wave your flashlight and take the whistle out of your Go Bag and blow it as hard as you can. Then just wait. Maybe snack on your nonperishable granola bars and drink your bottled water. They should be in your Go Bag—if you’re prepared for the storm, that is.

Each of these books presents a master class in craft while also providing a perfectly honed narrative that draws the reader in and won’t let go.