Almost every day for the past 28 years, Arthur Wood has hoisted himself to the upper stories of his Clinton Hill home to hammer, paint, and weld an unfinished dream he calls Broken Angel. Although he wears his own hard hat, he has never labored at a construction site or adhered to blueprints.

“I’m a self-taught architect,” the 75-year-old artist says. His architectural experiment has gained fame as the backdrop for Dave Chappelle’s 2005 Block Party and as the subject of a Sundance documentary, becoming one of Brooklyn’s oddest icons. 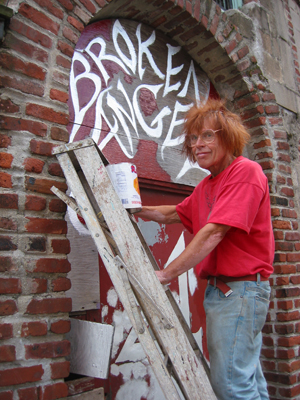 What was a hollow, abandoned four-story building has been transformed into a 108-foot-tall manifestation of Wood’s eccentric mind. Walk inside and you’ll experience it: discarded beer and soda bottles given renewed life as stained-glass cathedral windows; household tile shards and aged brick cobbled together to form a mosaic of angels. Go outside and watch polygon-shaped windows zigzag or arch depending on which side of the building you’re viewing. Take a step back and you’ll see three distinct buildings perched atop one another; at second glance, you might see five.

On a lucky day, you might even run into Woods. From afar, he’s easily distinguishable by the unruly clump of orange hair flaming past his ears. Get close enough to shake his hand and you’ll notice, beneath a pair of rounded spectacles, eyes that burn sapphire. Look deeper and you’ll see a vast ocean, where ideas swim. And if he’s in a good mood, he’ll greet you with a mile-long expanse of teeth that stretch across a deceptively youthful face.

Born and raised in Saratoga, NY, Wood moved to Brooklyn at 19 and finished his art degree at the Pratt Institute. He lived in an apartment only blocks from campus, and worked in a cramped studio space, where the smell of trapped paint fumes hung in the air, sticky and heavy—a reminder of what so many New Yorkers lack: space.

“I think if you live in a small, tiny apartment, your dreams and ideas are small,” Wood once wrote. “If you live in a large place—a place with room and space—you dream big.”

W ith cans of paint piling and finished artwork cluttering the walls as well as the floor, Wood and his wife decided to move. They stumbled upon the vacant Brooklyn Trolley Company building on an afternoon walk. Slated for demolition in 1979, the wrecked and vandalized building had been put up for auction three times with no buyers. At the fourth and final auction, Wood and his wife bought it for $2,100.

“The day after we bought the building, the son of the adjacent factory owner who we beat out at the auction knocked on my door and approached me with an offer of $3,400,” said Wood. “He wanted to turn it into a parking lot for his trucks. I said no.”

For what appeared to others as just another rusted brick corpse on a dying street, Wood felt only needed a makeover. “What was essentially a vacant building presented to Arthur, the artist, a creative opportunity he didn’t have before,” says Dan Dalrymple, Wood’s former assistant. “Now he’s got this great blank canvas. Naturally, he ponders what he can do with it.”

Wood found ideas everywhere: materializing in dreams, resurrecting him in dreams, resurrecting from history books, and peeking out of dumpsters. On the top floor, Wood constructed a camera obscura room, a 17th century device that uses lenses and mirrors to project an image of the City skyline onto the wall. And whenever he saw a discarded door in a trash heap he would yell: “What’s my door doing in there?” recalls Dalrymple. “The building offered him so many possibilities that I think it overwhelmed him.”

During the 80’s, then neighbor Russ Abell often spotted Wood at the nearby Pratt library, usually seated and reading in seclusion, his hunched figure barely visible behind a stack of architecture books. At any given time, Wood had more than 50 books checked out.

Abell remembers the day he first met Wood. “I had just moved to the area and was looking for an artist’s studio to rent and he showed me around [Broken Angel],” says Abell. “I was struck by how unique the building was. He talked about doing things you wouldn’t imagine, like putting a carousel on the roof and building an airplane inside. But here he was, actually doing it.”

Abell sees Wood and his Angel as a remnant of a bygone era, before property values soared—the building’s market value is currently listed at slightly over $1 million—and before high-rise apartment complexes replaced the vacant lots that once peppered the neighborhood. “Arthur comes from a generation of artists that was able to do these amazing things themselves with barely any money and without institutional intervention,” says Abell. “Now you have to go through agencies, art organizations, and government programs. He’s got one of the last oases of the once-adventurous Brooklyn.”

W hen Broken Angel caught fire in October 2006, everything changed. The mysterious blaze drew scrutiny from the City’s Department of Buildings, which condemned the structure for building code violations and removed Wood and Cynthia from their home with the help of the NYPD for ignoring an eviction notice.

“An architect who inspected the building found numerous code violations—an illegal 50-foot structure, no staircases, unsecured wooden planks, charred structural beams, missing floors,” stated Jennifer Givner, a spokeswoman for the City agency. “If debris from it falls, it threatens the surrounding area. It is a public safety hazard.”

Wood’s son disagrees with that assessment. “I don’t see [Broken Angel] as a building at all,” says 33-year-old Chris Wood, who provided shelter and a couch for his parents during the eviction. “It has become [my father’s] life’s mark, something to be remembered by when he dies.”

At 5-foot 2 inches, Arthur Wood routinely looks up at people, but he claims to back down to no one. He has had to learn to be an architect, a carpenter, and now his own attorney. He immediately decried the building’s condemnation as “emotional terrorism” and filed a lawsuit against the City disputing the charges, vowing a legal battle all the way up to the U.S. Supreme Court.

A month after his arrest, he appeared in court wearing a black dress coat, evening-blue slacks, and enough fruit printed on his tie to make a salad. Still fuming from the eviction, he taunted City officials from across the bench prior to court sessions. “I’m going to destroy them,” he growled, mentally licking his chops.

Yet on January 10, 2007, Wood was forced down a new and uncertain path. Facing demolition threats, he and his wife agreed in Brooklyn Supreme Court to submit blueprints for dismantling the 50-foot rooftop structure—50 feet of what gave Broken Angel its wings. To the surprise of many in the community, he also entered into a partnership with local developer, Shahn Andersen, to redesign and convert most of the building into condominiums.

S ince the ruling, Wood no longer spends his days atop Broken Angel, his imagination towering over the rest of the world. Gone are the late afternoons spent smoothing gravel, moments before the sun descends toward its evening slumber.

Wood’s mane, once rippling with flair, has dampened to a tangle of withering pale grey. “My whole life has changed tremendously,” says Wood, his voice, once full of hiss and protest, now coarse and scratchy. “I’m always having to meet with financial advisors, attorneys, accountants, and loan officials. I met with some brokers the other day who pretended to be interested in investing in it, but they really only want more condos.”

Still, Wood publicly expresses faith that the partnership with Andersen will preserve his creative vision and that art will flourish—even with commercial interests moving in. “I will never be a businessman,” says Wood, a flicker of intensity still sizzling in his eyes. “I have always been into my art. The only difference is that I have resources now, a lot of resources. And I’m not doing it by myself.”

While Wood firmly believes that Broken Angel will continue to soar—he already has designs for reconstruction of the building, which he works on from a nearby apartment set up by Anderson—he knows his life has been grounded. “I’m used to having lots of space,” he says. “I used to have a friend that always got me exactly what I wanted for Christmas. Turns out, he found stuff around my house and gave it to me. I had just forgotten I ever had it,” he chuckles. “I have always done what I wanted and I don’t regret any of it.”

Wood pauses, takes in a whiff of disappointment, and sighs. “But I no longer can be a free-spirited bohemian anymore—that’s for sure.”

Tuan Chau Nguyen is a writer who lives in Astoria.

Multiple generations of American anime fans have only been able to appreciate Mamoru Oshii’s beguiling art film in bootleg form—whether via imported home media or online links. But despite originally being made to go direct-to-video, this is absolutely worth catching on a big screen, in an environment where a viewer can be fully immersed in the movie’s gorgeous visuals and uncanny tone.