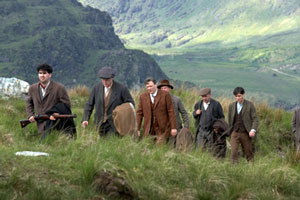 Ken Loach (Warwickshire, England 1936) is at his best depicting the little lad struggling against the factions of society that are supposed to protect him. Loach, an Oxford law student, moved from theatre to television direction in the early sixties, while remaining the socialist conscience of the English movie system. Loach made his greatest impact with his then unique docudrama style, TV’s answer to the limited British New Wave Cinema.

His 1966 Cathy Come Home, featured on BBC’s popular Wednesday Play slot, detailed the decline of a young married couple through various levels of destitution as they lost their home and children to an indifferent state. Cathy, considered one of the most important television works produced in England, instigated widespread examination of the British system’s dealings with the homeless, governmental reforms and changes in social trends.

Riding on the success of Cathy, Loach debuted in features with Poor Cow. Loach atypically cast known stars, and featured a young Terence Stamp (sequences from Poor Cow would later appear as Stamp’s flashbacks in Steven Soderberg’s L.A. noir The Limey). With his 1969 masterpiece Kes, Loach solidified his reputation as the voice of the politically marginalized. Kes tells the grittily realistic tale of a fatherless, friendless Billy Casper, who adopts and trains an orphaned Kestrel in the bleak English north. The bird represents the bullied boy’s one small freedom and hope against a gray future of coal mining and the British system.

The seventies and eighties proved hard times for Loach. His films suffered from bad distribution and the financial backlash of Thatcherism against the arts. The nineties brought a change. A string of award-winning films, primarily in Europe, established Loach in the front ranks of European directors. Hidden Agenda (1990), an Irish troubles suspense drama, and Raining Stones (1993) both took the Special Jury prize at Cannes; Riff Raff (1990) won the prestigious Felix Award for best European film.

Because of his left/socialist leanings and anti-sovereign mentality, Loach gets accused of hating England. His films are usually badly received in his homeland. Loach reportedly refused the Order of The British Empire, one of the Monarchy’s highest honors. On declining, Loach said “I turned down the OBE because it’s not a club you want to join when you see the villains that have gotten in.” Them Brits don’t like it when you disrespect their Queen.

In May 2006, Loach’s The Wind That Shakes the Barley, was the unlikely winner of the Palme d’Or, the crown of the Cannes Film Festival. The film was heavily criticized by British press for its negative depiction of the English occupying forces in Ireland. Despite the uproar, Loach accurately captures the savagery of the Black and Tans, a mercenary group of mostly former-WWI British soldiers drafted to Ireland in 1920 and given a free hand in quashing the pro-independence forces (my own Granny’s priest, murdered by the Tans, was found with his fingernails ripped out in a County Galway ditch.) One English rag reviewed Loach’s film with the banner headline: “Top Cannes Film is most pro-IRA ever.”

Graphic violence, Irish Republicanism, the British press all pissed off—how could I possibly dislike this film? Yet, Loach let me down.

The Wind that Shakes the Barley takes its title from an Irish ballad telling of a lover doomed in the Irish rebellion of 1798. The barley refers to the grain the rebels carried in their pockets as provisions. As a result, barley often sprouted from “croppy holes,” mass unmarked graves where murdered Irish bodies were dumped by English occupiers.

B arley opens in 1920’s Ireland, two years after the Irish Nationalist party, Sinn Fein, had won a huge majority in the new Irish Parliament, a situation not stomached in the colony by the British ruling government. Damien (Cillian Murphy, 28 Days Later) is a young doctor departing his County Cork home to work in a London hospital. He becomes radicalized by witnessing one too many atrocities against his country men by the Black and Tans. Drawn into the troubles (only we Irish would describe periods in history of blowing the shit out of each other as ‘troubles’), Damien joins his brother’s band of guerillas and stages raids and ambushes against the English army. There’s the obvious informer, because every Irish film about this period has one, and the ‘reluctant execution of the informer scene,’ as well as an obligatory head shaving.

The war for independence ended with the signing of the 1921 treaty that split Ireland into the 26 county Republic and the 6 counties that today remain Northern Ireland. Dividing the country in two led to civil war in which pro-treaty brothers fought anti-treaty brothers. Barley ends in violence at the cottage home of the innocent Barry family, the place we first witnessed the troubles. Loach thus closes with a bleak reminder that the cycle of killing will not stop.

Sound straight forward? The movie depiction is—the actual history was not. Barley has an unusually traditional narrative structure for Loach and the visual aesthetics of an ultraviolent made-for-TV movie (the costumes look like they were hired from Paddy-O-Rent-A-Tweed). Barley preaches and over-explains. Growing up in Ireland, the troubles were a constant backdrop on the daily news. Ireland is still haunted by the ghost of decisions made in 1921. The simplicity of Barley’s telling is not an adequate representation of the most important period in Irish history. The director has long included non-actors amongst his professionals to achieve an aura of realism (no Scorcessian “D’ya tink are dey goan ta feed us now” faux brogues for Ken). His films, though ostensibly performed in English, are spoken in such harsh accents they require sub-titles (try watching Riff Raff without them), and do not translate well this side of the pond. Loach has cited as his primary filmmaking influences the Italian neo-realists, who he felt have ‘an immense respect for people.’ That respect seems to be missing from Barley, as it was from the also disappointing Land and Freedom, Loach’s other attempt at dramatic historical realism. Gone are the Altmanesque conversations, the rambling pub and party scenes and social gatherings where characters congregate, laugh, savor one another’s company and thus demonstrate their solidarity. Barley’s communal gatherings are funerals, prison cells, stilted political meetings, and quietly shared pints that end with the killing of more English. We recognize the villains because they wear uniforms, have English accents, swear and SHOUT. When Irishmen start fighting Irishmen, we meet the new villains; they wear uniforms, swear and SHOUT, but with different accents. Fresh from killing a battalion of English troops, the Irish are ordered not to look at the corpses. They are not permitted to personalize the enemy; Loach never does and so neither can the audience. While the IRA wait in ambush, we watch distant and removed; they are killing a political representation, not humans beings.

The Wind That Shakes the Barley has little of the artistry of many previous Cannes winners. It does however, have an Anti-Bush sentiment that the festival voters seem to value (Fahrenheit 911 also undeservedly won the Palme d’Or, 2004). The film alludes to the parallels between the British in Ireland and today’s Middle East. It demonstrates the birth of political extremism resulting from foreign occupation, and the pitfalls of self-rule by a virgin government handed the reins after a long-term repressive occupation.

The exhibitions We Do Not Dream Alone, the inaugural Asia Society Triennial, and Dreaming Together at the New-York Historical Society bring together works by over 40 artists selected from the collections of both institutions in a thoughtful and very welcome showcasing of the work of Asian and Asian-diasporic artists still underrepresented in mainstream Euro-American contexts. At this moment, when the movement of people and even artworks is difficult, the mere existence of this two-museum show is a major accomplishment.