What else do Eddie Murphy and Tyler Perry have in common? 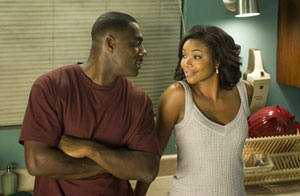 Daddy’s Little Girls and Norbit both stretch the truth by presenting themselves as comedies. Tyler Perry’s first non-drag film is actually a romantic drama, a love story with a serious side. And Eddie Murphy’s multi-role drag extravaganza is not the least bit funny.

The two movies have a lot more in common than a dearth of yocks. Both are the handiwork of African-American media moguls whose brand-name clout guarantees solid box office despite withering reviews. Both tackle the black woman’s exasperation about the shortage of good black men and propose that the ladies relax their criteria.

Both use gospel music and getting funky on the dance floor to signal moments of psychological truth. Both have as their primary villain a monstrously selfish black woman, backed by black criminals who are the scourge of the community. Both climax in collective acts of cathartic violence.

And both are cheesy in the way mass culture is always cheesy—sentimental, simplistic, powered by fantasies based on a significant quotient of willful blindness.

Norbit features Eddie Murphy in three roles: the title character, a child-man so nebbishy as to seem developmentally delayed; Norbit’s immensely fat, immensely evil wife, Rasputia; and Mr. Wong, the owner of the orphanage-cum-Chinese-restaurant where Norbit grew up. The love interest is supplied by Thandie Newton; after she’s betrayed by a good-looking con man, she realizes Norbit is her true love, even if he is a bit of a gomer. Newton plays the part with the desperate air of someone who’s got a gun held to her head.

The film, which Murphy wrote with his brother, Charles, is a festival of stereotypes. Mr. Wong is a Borscht-belt Oriental who tells tired jokes when he’s not exploiting orphans. Norbit’s only friends are two semi-retired pimps who combine the clichés of pimpdom with the tropes of the minstrel show.

Then there’s Rasputia, a bitter caricature of a liberated woman literally too big for her britches. She’s sexually insatiable and cares only about her own pleasure. Although Norbit is desperate for a family, she won’t consider having a child. She holds onto her maiden name and always sits in the driver’s seat, even though every time she squeezes into the car her massive breasts set off the horn.

Kate, by contrast, is everything Rasputia is not: so thin the ridges on her chest stand out like Venetian blinds, so loving she has given up her career as a clothing designer to take over Mr. Wong’s orphanage, so asexual that her romance with Norbit is nothing more than a continuation of their childhood puppy love.

But what energizes this movie is not love but hate, specifically hatred of Rasputia. She is not only a fat woman but a very black woman, a prototypical ball-buster with long fingernails and not a single redeeming virtue. Perhaps Norbit’s fury at Rasputia, and its relish for humiliating her Venus-of-Willendorf body, is one reason the movie is so endlessly unfunny, like a series of cruel remarks with “just kidding!” tacked on as an afterthought.

In the end Rasputia and her three thuggish brothers get their comeuppance when the whole town turns on them. The town is a New England-style village, however, apparently mostly white (despite the gospel choir that conveniently turns up for the wedding scene). So when all these white folks rise up to annihilate Rasputia, and Mr. Wong dispatches her with a harpoon up her ass, the ugliness of the racial and sexual subtext is breathtaking. It would be comforting to think that Eddie Murphy was just in this for the money. But clearly something else is driving him, and whatever it is, it isn’t pretty.

W hile Norbit is a product of snickering artifice, Daddy’s Little Girl is cloddishly sincere, and in that sincerity lies its charm. Tyler Perry has put together an up-to-date version of the B-movie women’s pictures that used to be a Hollywood staple—not slick chick flicks about sex and the city, but heartfelt odes to home and family.

If you care about the niceties of filmmaking, if you’re bothered by slipshod plot construction, or if you’re not female, you’ll probably find this movie unbearable—not that you’d even consider seeing it. But for those who enjoy watching a sweetly predictable romance unfold in a slightly exotic (to most of us) setting, Tyler Perry’s latest is not a bad way to spend an hour and 35 minutes.

The story centers on Monty James, an ex-con auto mechanic living in a poor black section of Atlanta and struggling to raise his three young daughters. Idris Elba, best known as an intellectually ambitious gangster on The Wire, plays Monty with an uncouth grace that emphasizes his maleness as well as his integrity. Just the way he climbs into a car’s driver’s seat—not sedately plunking down, but swinging himself in like a Marine going over a wall—acts like a jolt of pheromones. So does the way he pulls his shirt off at every opportunity.

Monty’s ex-wife (a malevolent Tasha Smith) has become the moll of a crack dealer who lords it over the neighborhood from a penthouse apartment. Now she demands full custody of her daughters, an arrangement that includes forcing one girl to sell drugs at school and beating another for crying.

Monty’s anguish over losing his girls is presented as the latest and worst in an accumulation of betrayals by a system that has never given this decent man a break. Yet for Monty, despair is a temptation as deadly as crack. In one scene, he gloomily sits in church listening to a preacher whose outfit recalls the pimps in Norbit, although the effect is documentary rather than comic. The preacher calls on his flock not to give up hope, crying, “God is about to bring your due season!” and the peace that spreads across Monty’s face is genuinely moving. Could a movie starring white actors pull off such a convincing depiction of religious faith?

Of course Monty has more than God to depend on: he has Tyler Perry. When he gets a second job as a driver for Julia, a beautiful, high-powered lawyer who’s never lost a case, we know she’s going to be the answer to his prayers. But her initial reaction to him is snobbish disdain. “Let’s keep this strictly professional,” she says icily when he tries to say anything to her beyond “Yes’m.”

Julia, in other words, is Rasputia in a better body, and with much classier clothes. But she is played by the lovely Gabrielle Union, whose charm is such that she makes even her character’s initial brittleness endearing. And we soon learn why Julia is so mean: she’s been disappointed by one too many African-American men who are layabouts, cheaters, or both. While Murphy wants to destroy his female lead (and alter ego), Perry wants to redeem his.

Inevitably these two good-looking specimens get together, helped along by a steamy night of drinking and dancing at a blues bar. Led by Monty—and in defiance of both the law and Christian teachings—his friends and neighbors assault the crack dealer’s posse and send the whole gang to prison. Monty regains custody and Julia melts into his arms. At least for one man and one woman, the dilemmas of black America have been resolved.

Daddy’s Little Girls ends there, which is really too bad. A genuinely interesting movie could be made about the aftermath—how does a $500-an-hour attorney find happiness with a poor but honest mechanic and his three saucy daughters? If Tyler Perry turns his attention to that question, his next movie will really be worth watching.