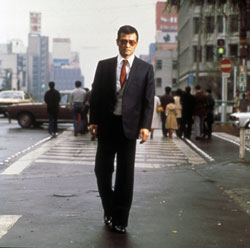 Ken Ogata as the sociopathic Iwao Enokizu in Vengeance is Mine. Photos courtesy of Photofest

Unlike most Japanese filmmakers more familiar in the West, Shohei Imamura was “interested in the relationship of the lower part of the human body and the lower part of the social structure.” Imamura focuses on the seemingly animalistic, often criminal lower strata of Japanese society without passing judgment, meticulously observing human nature for its own primal sake. Sadly, his rawer, and in some sense truer vision of Japan is not well known in the West, despite the fact that he was one of the few directors to win the Cannes Palme D’or twice (The Ballad of Narayama in 1983 and The Eel in 1997). 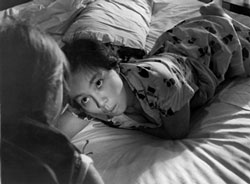 Sachiko Hidari as Tome in The Insect Woma. Photos courtesy of Photofest

The Brooklyn Academy of Music celebrates Imamura—who died last May¬—with a cathartic retrospective: All 20 of the director’s features will be shown. Among the most rarely screened films are Pigs & Battleships (1961), a scathing attack on America’s post-war ‘democratization’ of Japan, and the reality-blurring documentary of missing persons, A Man Vanishes (1967).

Westerners tend to think of Japanese cinema as a stable of established auteurs and their favored subjects: Ozu had the traditional family and its dissolution; Kurosawa took on social hierarchies, placing his heroes—from everymen to samurai—within dialectic structures; Mizoguchi is known for his noble women who braved the odds of societal oppression. All were marked by their inspired humanism, with sometimes maudlin tendencies. They represent a golden age of Japanese cinema—the old guard in a country delineated by dualism, whether the dichotomy of east and west, modern and traditional, or the classicists and the revisionists. 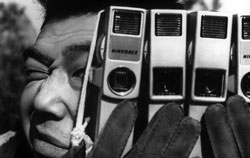 A leading figure of the Japanese new wave, Imamura preferred to dwell on the more base aspect of human nature. Showcasing prostitutes, pornographers, thieves and killers as protagonists, Imamura forged an oeuvre of uncompromising social commentaries, punctuated by sex, violence and bawdy, nearly surreal comic touches. Yet no matter how subhuman his characters might appear on the surface—from the dirty movie producer in The Pornographers (1966) to the repeatedly victimized wife in Intentions of Murder (1964)—it is precisely their primitive nature that Imamura reveals as possessing the potential for transcendence. No wonder Imamura—a doctor’s son who sold black market goods to his professors at Waseda University while acting and writing for the stage—nurtured an intellectual obsession with the lower classes. His predilection for frank portrayals of incest and murder proved Imamura a controversially radical voice. Antithetical to the humanists, Imamura considered himself a cultural anthropologist, making challenging films to discover what sets mankind apart from animals.

The Insect Woman (1963) took the human/animal metaphor to a more provocative level, from anthropology to entomology. Inspired by an indomitable insect endlessly circling an ashtray, the film is a unique parable for a woman’s instinct to survive, no matter how demeaning the odds. Tome, a simple country girl, vaults out of an incestuous relationship into the adversity of the city. Her subsequent rise to the top of a hopelessly corrupt world draws an allegory for Japan’s own post-war rebuilding. One might assume that likening a woman to an insect is derogatory, yet this is pure Imamura at his most novel—the very aspects of life we think repellent offer insight into our own true natures. It is Tome’s unyielding fortitude, no matter how bizarre her fate, that Imamura admires.

While Mizoguchi featured courtesans and prostitutes as heroines (Life of Oharu, Street of Shame), his trademark exquisite compositions—meticulous frames, beautifully rendered no matter how tragic the milieu—belie any sense of squalor. Imamura, known for his telling remark, “I make messy films,” honed an aesthetic of gritty realism, incorporating deliberately chaotic editing and framing to conflate both the real and surreal. Montage yields metaphor with stunning, hallucinatory results: one sequence from Vengeance is Mine (1979) begins with a man ascending the stairs of an inn, intending to kill the innkeeper’s mother. As he climbs, the killer’s own frail mother enters the frame. She is, in reality, miles away at the family home. The next cut reveals the killer’s mother looking through a doorway at her disrupted family seated at dinner, all startled to see their sickly matriarch out of bed.

The apotheosis of Imamura’s themes and stylistic conceits, Vengeance is Mine launches the series with a deserved week-long run (and a brand new print). The film’s source is a novel inspired by the true story of a serial killer who conned and murdered his way across Japan for 78 days before capture. Ken Ogata delivers a tour de force performance as the sociopathic Iwao Enokizu. He forces us to examine what drives random acts of deceit and violence. One obvious question is why we as a society are continually fascinated by murder, no matter how shocking. A more crucial point is how Imamura handles this subject matter and to what ends.

Vengeance steers clear of palpable sensationalism, at times affecting an almost clinical objectivity. We witness the discovery of a corpse and the consequent police investigation of the murder scene at the removed distance of an innocent bystander. Subtitles often appear on screen in documentary fashion, relaying details such as victim’s names, time of death, or the killer’s whereabouts. Yet we are also drawn into the intimacies of the killer’s life of crime and the complex, dysfunctional relationships that offer clues to his seemingly inexplicable motivation.

Imamura started out his film career as one of Ozu’s assistants, working on family dramas like Early Summer and Tokyo Story. In his own works, Imamura decidedly refuted the painstaking orderliness of Ozu’s style as well as his conservative themes. Both The Pornographers and Vengeance describe perversions of the traditional family structure. Iwao in Vengeance develops a familial relationship with the innkeeper and her disturbed mother while back home his devout Catholic father painfully denies the sexual longings between Iwao’s wife and himself. Ogata, the smut producer in The Pornographers, moves in with his widowed landlady and lover Haru, filling the patriarchal role in her household. Later Haru grants Ogata permission to marry her daughter. While the antihero in Vengeance seems hell bent on breaking down society, the congenial Ogata sets out to save it. And how does he plan to do so? With various mechanized outlets for sexual frustration—logical remedies for a repressed society.

Imamura, like Ozu, often films in the home, but any similarity ends there. These homes are always cluttered, maze-like and often framed from other rooms, through barriers, or odd angles, underlining the primordial anarchy of the characters and their interpersonal relationships. This restless energy is signified by the often transient state of Imamura’s protagonists. The fugitive nature of Iwao in —we see him on bicycles, boats, taxis, trains, settling down at the inn for just a fleeting moment—reminds us of his agitated mindset. There is no safe or steady ground—even the police interview one of their leads on a moving train. Despite attempts at domestication, the inhabitants of Imamura’s world refuse to be bound by societal constrictions, deferring instead to their instincts and desires.

Wound-first Into the Future,1 part I

Jeremy Hoevenaar lives in a fifth-floor walkup threshold with his beautiful family. He is the author of Cold Mountain Mirror Displacement (American Books) and Our Insolvency (Golias).

Lewis Warsh: Part of His History

Steve Clay is the publisher of Granary Books, as well as an editor, curator, archivist, and writer specializing in literature and art of the 1960s, ’70s, and ’80s. He is the author or editor of several volumes including, most recently, Intermedia, Fluxus, and the Something Else Press: Selected Writings by Dick Higgins.