Lenny Bruce said that as near as he could tell, what the Supreme Court regarded as obscene or not obscene came down to the “difference between dirty screwing and fancy screwing.” Exterminating Angels, a piquantly post-modern French meditation on the mystery (to men) of the psychology of feminine arousal, features supremely fancy screwing indeed. Not screwing qua screwing: le sex is girl-on-girl. The male lead gets totally screwed himself, but he never gets laid.

Director Jean-Claude Brisseau pursues his deconstructivist-French-person-pondering-the-sexual-mysteries intellectual agenda straight-up. Unlike Catherine Briellat’s explicit mega-downer Anatomy of Hell or her merely annoying Sex Is Comedy, Brisseau does not present his Big Questions interwoven into the drama. Here, they are the drama. Brisseau’s protagonist is a movie director who repeatedly posits aloud the motivating inquiries of the story. This post-Godardian ploy works because Brisseau wants to remind us of his own distance from, and intimacy with, this story. 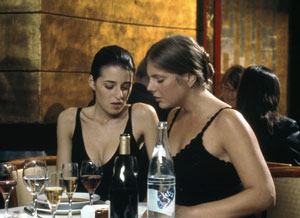 The Director (played by Frédéric van den Driessche) finds himself enthralled (in a French brains-fuel-groin, groin-fuels-brains kinda way) after an actress unexpectedly masturbates during her audition. Director then sets out to find girls who’ll do it on purpose, on camera, and who’ll make love to another woman as well. Brisseau/Director presents this quest as the innocent fulfilling of his own curiosity. A key part of the deal is that he cannot touch the women, ever. He has a tough-ass, loving, cautionary wife waiting for him at home after a wearying day of watching exquisite young French women get off for his—and their—benefit. The Director’s blank-faced faux naiveté/obsession when confronted with these feminine avatars is nowhere near as irritating as it could be: Director makes a plausible stand-in for every other dumbstruck male facing similar mysteries. The Director’s implicit plea of innocence (“I never touched those girls, honest!”) seems disingenuous and a key aspect of Brisseau’s notion of the erotic. That he becomes a dumbstruck male, and can thus claim no culpability, is passive aggression of the first order. Bottoming from the top, one might say.

Being French and piquantly post-modern, Angels commences with the Director dreaming of his dead grandmother. In a frightening, dislocating sequence, Granny warns Director against pursuing his own pleasures too avidly. Lurking in the stairwell as Granny speaks are two fabulous French babes in tank-tops and to-the-minute jeans. They are, it turns out, angels. But they ain’t nice angels. When the actress appears who will turn out to be Director’s great obsession and undoing (ain’t that always the way?), one of the super-babe angels whispers into Director’s ear, telling him that this girl will be his muse. The muse, who’s periodically inhabitanted by Satan, insists the Director take her to a hotel right away, so she can masturbate under his gaze.

Opening with a Buñuel-evoking dream/fantasy/foreboding sequence immediately clues us to Brisseau’s Is It A Film Or Is It a Commentary On A Film? This dynamic rules not so much the staging or story, but the editing. Brisseau holds the reaction shot close-ups of his doppelganger for so long—and they are so badly lit, that, as in a David Cronenberg film, you can’t tell whether he’s is making some obscure point about identity (or something) or doesn’t know how to cut a scene in rhythm. The reverse cut from the Director returns to one of four young actresses, and they’re lit like a page from Bazaar. Is Brisseau communicating that the Director has more moral or dramatic weight than the women? Or that his dilemmas are more compelling than their beauty? Or does Brisseau hold for too long to remind us—Godard style—that it’s only a movie?

T his sounds pretentious, off-putting and exasperating—and it’s all three, really—yet Brisseau’s methods and questioning gain force as the film continues. Because the sex scenes are the most true-seeming (with a shockingly touching air of awkwardness and sincerity) and hottest I’ve ever seen, the film certainly rewards attention. Because the film is also about the difficulty of staging sex scenes, and the concomitant difficulty for actresses to sincerely screw on-camera, all the questions the Director finds alluring flood the mind as the women go at it: Are they faking? Could a man tell if they were? How does the presence of the camera and the Director alter their behavior? And, most crucially for Director and hottest for, uh, me: When do the women lose themselves in pleasure and what usually concealed aspect of self is revealed when they do? The elegant, arousing, mutual masturbation and the naïve sophistication of the Director’s questions make Exterminating Angels irresistible and thought-provoking even as you sit there and enumerate every flaw. However galling the rising tide of high-minded French horseshit, Brisseau’s combination of fancy thinking and fancy screwing makes for fun viewing.

That fun may be limited to my side of the gender fence, I dunno. Remove the fancy trappings and self-conscious cinema and what remains is an older man turning young women into his fantasy objects by tapping into their fantasies. Brisseau’s “Who, me?” defense of his actions gets tiresome, as does the regularly occurring assertions by different actresses that they love Director and that Director freed them up for new and liberating sexual experiences. Brisseau thus uses the oldest abuser-excuse in the book: “See? They liked it!” But the film is nothing if not a welter of contradictions, because no one can deny the erotic lure of the situation—for those who swing like that. Nor can anyone deny the exploitative/abusive aspects of it, either.

In the end, Director pays heavy dues for leading the actresses into this liberating or oppressive gestalt. The dues are presented as injustice stemming from Director’s misunderstood motives and/or his well-deserved karma. Whether Director accrued this karma by overstepping the limits of pleasure the universe intended for him, or because he exploited the actresses, remains unclear. Either way, Director’s suffering is so thorough, and his protestations of innocence so relentless, that Brisseau’s credibility suffers. After the fancy screwing is over, what remains foremost is the question Brisseau is clearly asking himself: What really happened?

Elaine Reichek scavenges among sources from literature, history, mythology, and art, fabricating images and texts she transforms into textiles. Trained as a painter by avant-garde, intellectually rigorous icons, notably Ad Reinhardt, her career has been defined by her strategic use of the textile medium—a feminist, postmodern strategy.

…and you called it entertainment. / Black Girl was shot.