Lenny Bruce said that as near as he could tell, what the Supreme Court regarded as obscene or not obscene came down to the “difference between dirty screwing and fancy screwing.” Exterminating Angels, a piquantly post-modern French meditation on the mystery (to men) of the psychology of feminine arousal, features supremely fancy screwing indeed. Not screwing qua screwing: le sex is girl-on-girl. The male lead gets totally screwed himself, but he never gets laid.

Unlike most Japanese filmmakers more familiar in the West, Shohei Imamura was “interested in the relationship of the lower part of the human body and the lower part of the social structure.” Imamura focuses on the seemingly animalistic, often criminal lower strata of Japanese society without passing judgment, meticulously observing human nature for its own primal sake. 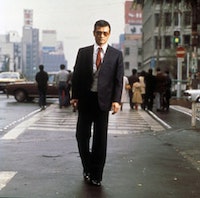 Raging of the Green

Ken Loach (Warwickshire, England 1936) is at his best depicting the little lad struggling against the factions of society that are supposed to protect him. Loach, an Oxford law student, moved from theatre to television direction in the early sixties, while remaining the socialist conscience of the English movie system. Loach made his greatest impact with his then unique docudrama style, TV’s answer to the limited British New Wave Cinema.

Kind of a Drag

Daddy’s Little Girls and Norbit both stretch the truth by presenting themselves as comedies. Tyler Perry’s first non-drag film is actually a romantic drama, a love story with a serious side. And Eddie Murphy’s multi-role drag extravaganza is not the least bit funny.

There's Something About Gogol: Gogol Kumar’s all grown up, but Mira Nair’s film falls short

In the book of Hollywood how-to’s, prostheses and makeup are the standard solution for young actors playing a character into middle age. (Jake Gyllenhaal’s unfortunate mustache in Brokeback Mountain comes to mind.) In Mira Nair’s new film The Namesake, Kal Penn eschews the faux beer belly for a far more elegant, and remarkably effective, technique. He simply adjusts his posture.