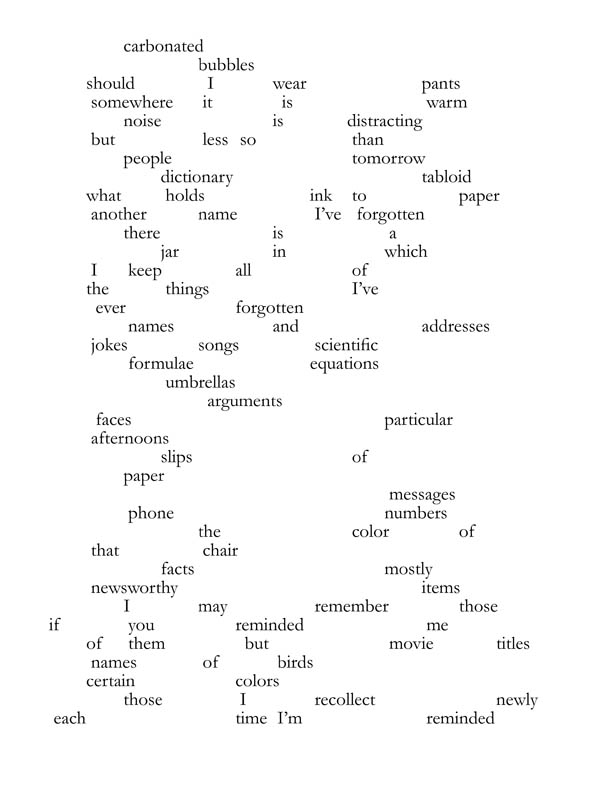 *A Note on “What Holds Ink to Paper”

In summer, 2004, I found myself unable to write. I had just finished a novel and I was having a very difficult time getting started with another writing project. I decided that even if I couldn’t write, I could physically act as though I were writing by drawing a pencil across a page. If words emerged during this process, I would write them down. In the course of this exercise, I discovered that more often than not, the act of moving my hand across the page was accompanied by words coming into my consciousness.

What resulted was a collection of Word Drawings, which have allowed me not only to notice the ways in which people respond to text differently when it is accessed primarily as a visual object, but also to explore the spatial relationships between words and the spatial aspects of signification. The drawings can be read both horizontally or vertically and signify in unique ways depending on the reading path selected. This project also continues my ongoing exploration of the sentence as a unit of language, its unique energies, its boundaries, as well as its propensity to disintegrate under certain conditions.

Friends who have seen the drawings have compared them to nets with words tangled in them, ploughed fields, sheet music, and EKGs.

While some of these Word Drawings are unstructured, meaning that the words collected were brought together based on free association, others are structured by focusing on language associated with a particular topic, as is the case with “What Holds Ink To Paper.” Collecting words related to memory and acts of remembering, “What Holds Ink to Paper” refers also to language and concepts derived from my research into gum-arabic. In 2001, it was reported in the New York Times that Osama bin Laden had made an attempt to corner the global market on this material that is an essential ingredient in many consumer products, including soft drinks (particularly diet varieties), pharmaceuticals, cosmetics, and one that also has unique applications in newspaper and magazine printing. Gum arabic allows ink to better adhere to paper, while at the same time reducing smearing. During the course of my research, I would also learn that about two thirds of the world’s supply of gum arabic comes from the Darfur region of Sudan, is collected from acacia trees, and harvested primarily by subsistence farmers.