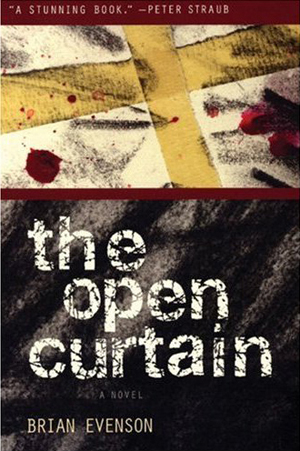 Brian Evenson’s The Open Curtain circles around two murky, frightening mysteries: the first contained in the novel proper, which tells the story of a contemporary high-school-age Mormon boy who becomes fascinated with a nineteenth-century murder, the second in the book’s afterword, where the author purports to explain why he wrote the book.

Let’s take up the latter concern first. Evenson states, “The book itself was an integral part of a movement [that he made] from a position of faith [in Mormonism] to a position of unbelief.” On the surface this seems implausible in that one imagines a major redirection in life would depend on a net of events in one’s daily life: new friends, new contacts, new situations, not on playing with words. Still, he does say this was only one factor in the change, so let’s take his statement at face value and interpret him as saying that, to a degree, Mormonism is a system of verbally expressible practices that can be dislodged from a believer’s consciousness by being intelligently fiddled with.

Is it by chance that the novel has the same direction? It describes the youth, Rudd, mentally fiddling with Mormon rituals, though in this case fiddling leads to murder, insanity and time warps. Rudd decides to write his English term paper on a slaying that was committed in turn-of-the-century New York City by William Hooper, the grandson of Brigham Young—a crime some claim enacted a Mormon blood sacrifice. (The novel supplies newspaper accounts.) Rudd, raised by his mother after his father’s suicide, is was already troubled and have begun associating with his hoodlum half brother, Lael, when he finds out about this slaying. He begins obsessing over it to the point of contemplating, for religious purposes mind you, some ritual slaughters of his own.

In an innovative and chilling narrative turn, Rudd begins to experience mental blanks. He rings the bell to Lael’s house—blank—Lael and him are lolling in the grass in a park, miles away. He doesn’t remember the interval between. Given that the neurotic hero doesn’t want to divulge his difficulty, his life becomes excruciating and puzzling. He tries to gauge from oblique comments what happened in the missing parts of his life. In one scene he wakes up on the floor of his bedroom, having forgotten what he did most of the day. He goes to the bathroom and gets a cup of water: “He turned and flicked on the light and looked at himself in the mirror. Lifting the cup, he drank again, half-watching his reflection, and saw that the cuff of his sweater looked as though it had been dipped in blood.”

It is a highly dramatic conceit that Evenson exploits to the full, crafting some intriguing and hair-raising scenes along the way, at least for the first section of the book.

The second section shifts focus from straight ahead (if subtle) horror to Gothic romance. The point of view changes from Rudd to Lyndi, a grief-stricken college girl—whose family was ritually murdered! She falls in love with Rudd, and like Jane Eyre, she does so without knowing her fiancé’s hidden “past.”

With Lyndi the book becomes more conventional, more carefully following the conventions of the genre—although it is certainly not conventional to align two different genres. The assumption that the author is highlighting is this: horror is associated with a masculine perspective and Gothicism with a female outlook. In any case, Evenson’s crisp, no-nonsense, yet peculiarly evocative prose doesn’t suffer as he changes modes. He skillfully keeps up the flitting of psychological tension throughout the work.

Mormonism, like many religions (maybe even all), consists of a number of entwined narratives. Evenson ties his Mormon belief to stories of horror and Gothic romance, and by combining and interrogating these genres, he is also studying and distancing himself from a religion that is presumably masked in narrative constructs. So, by a disturbing and unsettling entwining of genres, Evenson both deconstructs his own belief system and offers the reader two versions of terror, each with its own frisson.