Ben Greenman, A Circle Is a Balloon and Compass Both: Stories About Human Love (MacAdam/Cage 2007) 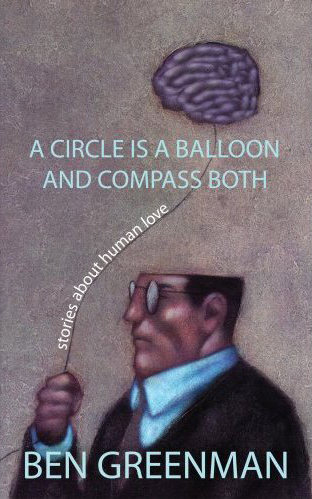 It’s hard to classify Ben Greenman, author of the forthcoming collection of stories A Circle Is a Balloon and Compass Both: Stories About Human Love. Greenman is an editor at the New Yorker, but it would be unusual for the New Yorker to publish fiction like his. He published his first book with McSweeney’s and still contributes to their website, but this most recent book has broken away from the McSweeney’s scene and is due out from the small but more conventional publisher MacAdam/Cage. Even the writing in Greenman’s new collection is mixed—split between the serious and the satiric, the sincere and the fake.

“I don’t want to be typecast,” Greenman commented to me when I met with him at his apartment in Park Slope. “I don’t want people to say, ‘Oh it’s this type of well-built short fiction that I see in the New Yorker a lot,’ or ‘It’s this kind of really experimental self-dissolving work that I see in McSweeney’s a lot.’ I would hope it’s both and neither.”

Like his last books, Superbad and Superworse (which was a heavily revised paperback edition of Superbad), A Circle Is a Balloon and Compass Both is a smart, tightly structured collection of experimental short fiction. The stories stand on their own in their originality, humor, and insight, but they’re also organized in the book to mirror one another—a trait illustrated literally in the book’s table of contents, which is designed as a series of concentric circles that pair stories by theme. Thus, the book opens and ends with two stories about love as art, which then sandwich further pairs of stories about love as music, place, sport, animal, power, and joke. Greenman is rather “obsessed” with mirrors, as he put it.

“When you get to the half-way point in a book, it’s a very strange process because you feel the part that your right hand is holding get thinner and the book is starting to disappear on you and so you start to think: ‘Well, I hope I’ve learned everything that I can from this book,’” he said. “In both this new collection and in the previous one, I wanted to play around with those kinds of ideas—literally mirrors in the book, but also parallels of things earlier in the book responded to by things later in the book and a point in the middle somewhere.”

In the case of A Circle Is a Balloon and Compass Both, the midpoint of the book is literally the notion of love as joke, and, predictably, this idea emerges as a broader theme connecting all of the stories. Known for his work as a humorist, Greenman handles the slipperiness of writing about a sentimental, over-exposed subject like love by undercutting it with an irony that adds humor to the book—as well as a touch of insincerity.

“Most books, most movies, most music, ask you to believe they’re either one or the other—they’re either serious or funny, real or not real—and so then you can kind of safely move forward once you’ve put them into those categories,” said Greenman when I asked him about the value of blurring the line between serious and funny. “That makes me a little mad, because I think everything is somewhere in between.”

Of course, a mixed-genre book like A Circle Is a Balloon and Compass Both can be a tough sell as far as mainstream publishing is concerned. Greenman has skirted this issue and retained a diversity of treatments by working only with small independent presses—first McSweeney’s, then Soft Skull, and now MacAdam/Cage—that are more willing to take risks on unconventional works.

“When I went around to shop Superbad and Superworse there was a lot of reluctance on the part of publishers to do a collection that took itself seriously as a literary product and also sort of mocked the idea of there being something literary,” he remarked. “They would say either, ‘Look, there are six or seven traditional stories in here, write three more and we have a collection,’ or ‘Oh, this is a great humor collection, just write ten more humor pieces and we have a great little funny book.’ And I always sort of wanted to mix them—both out of perversity and, out of, I suppose, some belief that these things belong together.”

Whereas McSweeney’s is occasionally labeled—wrongfully, according to Greenman—an “irony factory,” MacAdam/Cage has a larger, broader fiction list (making it “less of a moving target,” in Greenman’s words), which begs the question of whether the change in publisher represents a shift in Greenman’s focus. A Circle Is a Balloon and Compass Both isn’t likely to be selected for Oprah’s book club anytime soon, but it does represent a slight departure from its older siblings, Superbad and Superworse.

“When I did that first book there are things that are of course glib and snotty, but I was never under the mistaken impression that that was the extent of what I wanted to do or what the publishing houses wanted or what readers wanted to read,” Greenman commented.

“MacAdam/Cage didn’t necessarily want something more traditional,” he said. “I wanted to try something that was more—in the topics mainly, I don’t know if the treatments are more traditional—traditional, and I tried to make all of the stories more or less about people and whom they’re sleeping with and how they feel about that process and those people. The experiences in them are more recognizable.”

Although the emotions and experiences of the characters in A Circle Is a Balloon and Compass Both might be more “recognizable,” his approach remains unconventional. The book cleverly opens with a series of letters written by an artist whose passion for his girlfriend literally transports him to the moon. “A Field Guide to the North American Bigfoot” is a brief, hilarious story that features a drawing of Bigfoot repeated eighteen times with text beneath each image detailing the failed relationship between Bigfoot and his crush, Clara. One of the love-as-music stories takes as its premise a nation where everyone is a pop singer. These are light stories for the most part—playful, wryly comical, not asking for any straining interpretation—but as with his last books, they also contain a layer of complexity that gives them significance even after the jokes are stripped away.

As Greenman pointed out, that’s the challenge with parody and humor: “to go that one extra step to then make it sad or whatever else.”

Ricardo Wilson’s An Apparent Horizon and Other Stories

Wilson builds fully realized worlds in each story, be it a single paragraph or dozens of pages. The result is a challenging read where race and class are front and center, and they are explored in a way that is both sad and painful, and warm and witty.

Whether real or acrylic, blood is Nitsch’s preferred way to express the sublime, which the artist construes very much in Edmund Burke’s sense, as a spectacle that astonishes us, freezes us mentally and physically, and infuses in us a touch of horror.