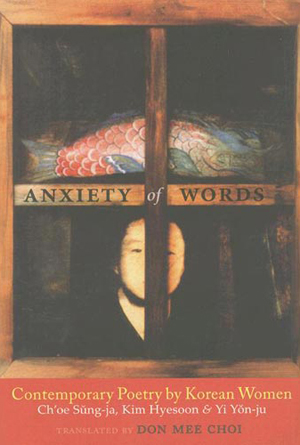 “I turned myself into a millipede,” poet Ch’oe Sung-ja writes in Anxiety of Words, “as I crawled along the bottom of an era.”

The era is Korea’s most recent—from the end of the Korean War to the present—and from Ch’oe Sung-ja’s millipede perspective, this anthology of translations reveals the humanity of that age more clearly and movingly than any more authoritative voice ever could.

The three poets showcased here—Ch’oe Sung-Ja, Kim Heysoon, and Yi Yon-ju—each have distinct voices and consciousnesses, but they are grouped together by their nationality (Korean), their gender (female) and their generation (b. 1952-55). Translator Don Mee Choi presents these women within these most obvious frames of reference but, following the poets’ lead, she does not let these parameters define or limit the work.

In her introduction, Choi outlines the politics of race, gender and class that inform the poets—they all experienced the trauma of the U.S.-Korean War, the subsequent brutal succession of military dictatorships, and the recent delicate transition to democratic capitalism, all from the perspective of the female underclass—but when we’re presented with lines like “After last night’s soundless mist / the front door cries out softly, / and death arrives, riding the milk man’s path,” we know we’re in the presence of a strikingly good poem, not mere polemic.

This is not to say the poems aren’t political, or that they present a kind of secluded fantasy world. The specifics of Korea permeate the book, from the U.S. military’s prostitutes at the Tokyu Hotel, to the leftover landmines in the countryside, to the beguiling “capitalist God” of the new Seoul. We’re never in the realm of removed privacy or pure aesthetics but in cold, clear reality. As Ch’oe says in her poem “So One Day, Love…” in this world there simply isn’t room for the strictly figurative:

Everything is tangible as concrete, everything a concrete wall.
Not a metaphor but a fist;
there’s only the crushing fist.

This turns out to be a guiding principle of the three poets’ work. Their poems reject universal metaphors in favor of specific details, and most of these details describe the female body in various states of duress and decay.

Here’s a representative excerpt from Ch’oe’s poem “Night Owl”: “Someone pissed / on top of my already dead body /and then left whistling.” Here’s another from Yi’s poem “What’s Wrong?”: “When the speculum was pushed deep into her lower belly / she felt a refreshing sensation as if she’d escaped from a stuffy subway.”

The overall effect is a gripping mix of Plath and K-Horror, totally outside of the nationalist literature that Choi tells us wants its female poets to “evoke something gentle and motherly.”

Within this context, then, we can see that when Yi writes lines like “Mother sighs, mumbles something, then shoves her dead baby into a garbage bin, rolled up in newspaper,” it isn’t just a gothic fascination with the grisly. It’s a way of reclaiming the female body from the arch-poetics of the metaphorical and the mythic, where male-dominated political poetry often takes excessive liberties with the feminine ideal, obscuring the reality (and often the gravity) of the situation.

The anthology aspires to break ground in the tradition of Ecco Press’s Eastern European translations of the ’80s, or the Chicago Review’s 1999 landmark issue of New Polish Writing, remarkable works that presented new corners of the world to English language readers and helped spawn the international fame of poets like Czeslow Milosz and Tomaz Salamun. Only time will tell if Anxiety of Words will have a similar effect on contemporary poetry, but, if nothing else, these translations provide the first step toward such a possibility.

The gravity of the situation in Anxiety of Words is unmistakable. Choi’s work renders each human voice distinctly, with a consistent precision and grace that makes the struggles of a people feel personal. It’s a thrilling achievement, and hopefully only the beginning of Choi’s presentation of these extraordinary poets.

Nichols is an editor at the Poetry Foundation and the author of Iowa, a poem collection.