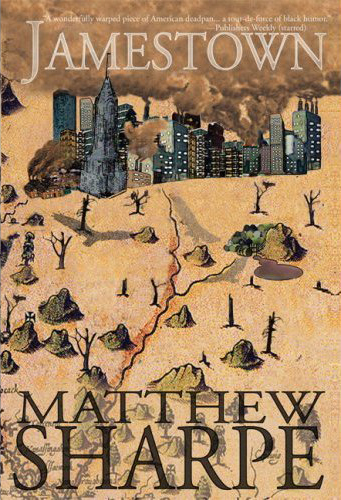 Most people born before the 1980s will remember letters. Hand- or typewritten, letters exist in time and in space in a way that text messages, IMs, and emails do not. A letter can be held, read again and again, stuffed in a drawer, hidden under a pillow, burned in a fit of rage. The physicality of a letter is gratifying to both sender and recipient, and is all but lost today. And the temporality of the letter is obsolete because most of our notions of time beyond the instantaneous are obsolete.

Yet letters do survive in fact and in fiction. Real letters are preserved for their significance—historical or personal, for example. Letters in fiction survive because, as tradition shows, there are advantages to using them.

Matthew Sharpe’s new novel, Jamestown, is a book of letters—an epistolary novel—loosely inspired by the founding of the Jamestown settlement in Virginia. Its tripartite structure eases us into the story by introducing us, in the first section, to two voices: Johnny Rolfe, an emissary from a corporation who is sent, along with a busload of convicts, killers and other ne’er-do-wells, on a bus from New York to Virginia in search of oil, and Pocahontas, a 19-year-old Native American girl whose father, a tribal chief, can’t say no to her, and who spends her time in a hormonal fugue state as she awaits her delayed menarche.

The interplay of these two very different voices provides tremendous friction and contrast. Johnny Rolfe begins his letters with a fatalistic salutation: “To whoever is out there if anyone is out there.” Pocahontas optimistically opens with, “To the excellent person I know is reading this.”

Here’s Johnny on the bus trip as he heads south on his mission: “I looked up in time to see John Martin vault his seatback, steak knife aimed at George Kendall’s throat. Kendall, bread knife aimed at Martin’s throat, said, ‘How dare you say that!’ Some great, quaint, pre-annihilation philosopher described the movement of history as thesis, antithesis, synthesis, whereas I’ve seen a lot more thesis, antithesis, steak knife, bread knife.”

Pocahontas introduces herself by announcing,

Pocahontas is my nickname, it means ‘person who cannot be controlled by her dad.’ …I want to write a fabulous description of the woods for you in the exciting language of English, but it’s going to be hard. I don’t know the English names of woodsy things. There’s a kind of moss that’s soft and green and smells like the neck of my mom, who died when I was one. I guess I’ll call this moss mom’s neck.

The epistolary form, by necessity, brings the characters’ voices to the forefront. We feel them speaking to us from the page. Using letters also allows Sharpe to sneak in other information: descriptions of setting and other characters, advances of plot, explanations of actions, glimpses into Johnny’s and Pocahontas’s interior life, all without using traditional narrative, which could create greater distance between the reader and the fictional world. The letters feel immediate, even personal, as if the reader himself is being addressed, and at the same time convey a great deal of information in a manner that almost escapes our notice.

In the second section of the novel we hear from a number of other characters, many of whom we’ve met previously. Pocahontas’s father, Powhatan, is the deteriorating chief of a tribe; Sidney Feingold, Powhatan’s advisor on matters legal and ethical, is arguably more powerful within the tribe than Powhatan; Charlene, Sidney’s bossy and argumentative wife, enjoys frequent and violent sex with Sidney; John Ratcliffe, executive V.P. of the Manhattan Company, has mandated and financed (rather poorly, as supplies are perilously inadequate) the expedition.

The form loosens as some chapters within this section retain the letter conceit while others appear to be simply a voice on the page. In a nod to the limitations of electronic communication, Sharpe has the Indians dupe the white men into believing they are unable to speak or understand the white men’s English. The first round of negotiations is therefore conducted with each side using the translation programs on their Blackberry-like PDA devices:

‘Please we ask that you do not plinuckment,’ came the response on the screen from Sit Knee Find Gold, along with a scowl from across the hall. The translation program evidently did not have an English word for the Indian word plinuckment, and while Smith and Ratcliffe continued their struggle for the soul of the Virginia Branch of the Manhattan Company, I typed ‘What is plinuckment?’ ‘Toyn,’ Sit Knee typed back. ‘What is toyn?’ ‘Gavagai.’ ‘What is gavagai?’ ‘According to the employment of the language of metaphor use, rabbit slices,’ Sit Knee said, via his inscrutable plinuckment.

It’s a short hop from this absurdity to the “smoke him out of his hidey-hole” steak knife-bread knife movement of contemporary diplomacy. Sharpe’s scene makes us wonder if world leaders composed their thoughts with some adequate deliberation, would we be spared this sanguine absurdity?

Although the second and third sections of Jamestown do not hew strictly to the epistolary format set up in the first, we often feel the characters’ voices coming to us as if in a letter, because we, the readers, are being directly addressed. Other letter-like forms, such as diary entries or prayers (“Dear Heavenly Father…”) serve the same epistolary function, while still others, (IMs, wireless communications) serve both as epistles and as contrasts to epistles.

Section three opens with an IM exchange between GreasyBoy (Johnny) and CornLuvr (Pocahontas.) They are trying to fall in love, but:

“GreasyBoy: When can I meet you?

INTERNET USER CORNLUVR IS NOT ONLINE AT THIS TIME

The instant messages have no other audience in mind than their intended recipient. They are composed on the spot and take the form of question-and-answer. While they occasionally can be revealing, they more often become a kind of “Hi. What’re you doing?” “Nothing” exchange.It is hard to imagine wanting to print a document like that for preservation in a historical collection, or choosing to print and save that conversation along with a bunch of love letters; it lacks historical or personal significance.

It is no accident that Sharpe has chosen this form for his novel. In doing so, he follows a literary precedent set as early as the fifteenth century. Letters of a Portuguese Nun explored sexual scandals and Love-Letters Between a Noble-Man and his Sister is known for its success in conveying the differing points of view of the characters without the presence of a judgmental or omniscient narrator’s voice. Using letters, Sharpe can comment on the value of the written word itself, without necessarily seeming meta-fictional. In the process, he can instruct us to view the world through the lens of a more patient, deliberate experience. When you’ve finished reading Jamestown, you may want to put it away wherever you keep old letters, if you are lucky enough to have any.

Matthew Ritchie’s show, A Garden in the Machine, is at James Cohan at 48 Walker Street through October 15. It includes two series of paintings made in the past year, a suite of ten related drawings, each titled Leaves, a large sculpture, and a film. The artist’s major career survey, A Garden in the Flood, curated by Mark Scala, will open at the Frist Art Museum, Nashville, Tennessee, on November 11. It will also include a collaboration with the composer Hanna Benn and the Fisk Jubilee Singers, with direction from their recently deceased leader, Dr. Paul T. Kwami. This is Ritchie’s first solo show at the gallery.