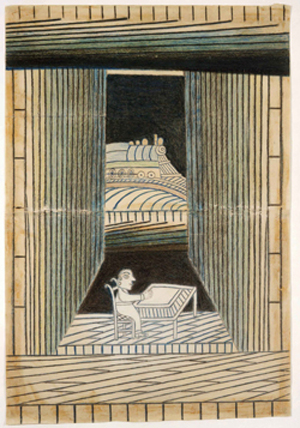 Failing surgery or stroke, it’s virtually impossible to unknow something. So we can only guess what our reaction to the art of Martín Ramírez might be if we encountered it in a traditional gallery setting, unburdened by knowledge of the artist’s story.

Would we assume that the man who made these large, vehemently pulsating drawings of trains and tunnels, mountains and madonnas, was just another MFA, albeit a supremely talented one? Or would these works, beautiful as they are, also strike us as somehow strange, at odds with their high-art setting and our own habits of art appreciation?

Ramírez is in fact one of the acknowledged masters in the arena popularly known as outsider art. Mexican by birth, a rural sharecropper by trade, he crossed the border to California in 1925 to work on the railroad. A few years later he was picked up by police in California’s Central Valley because he was behaving strangely and committed to a state hospital. He remained institutionalized until his death in 1963.

His surviving drawings, made on pieced-together paper using a combination of charcoal, crayon, fruit juice and other media, all stem from his time in the hospital. He reportedly had little to say about their meaning or his motivation, or indeed much else—at least in English. The only reason we’re now able to see them is thanks to a psychologist, himself an artist, who recognized their value and devoted considerable energy to bringing them to the art world’s attention.

Having won recognition within the world of outsider art, Ramírez is now achieving a new level of insider credibility thanks to his current retrospective at the American Folk Art Museum, curated by Brooke Davis Anderson. Rapturous praise has greeted this show of almost 100 of his drawings, and the work, with its audacious patterning, psychedelic perspectives, and dramatic composition, merits nothing less.

Despite Ramírez’s prominence within the outsider field, until recently his biography was sketchy at best, reflecting the tendency to see outsider artists more as symbols (of oppression, triumphant creativity, artistic purity) than as real people. It was assumed that Ramírez had no family, and his life in Mexico was a mystery. But the Folk Art show, thanks to years of research by sociologists Victor Espinosa and Kristin Espinosa, restores to Ramírez his family—including a wife and four children—and the cultural and historical context from which, it is now clear, many of his art’s specifics spring.

The installation is so packed with information—an abundance of wall labels, salon-style hanging of very similar drawings representing each of Ramírez’s favorite subjects—as to provoke a bit of nostalgia for the white-box settings of yesteryear that gave a work’s merely visual properties a little more room to breathe. Still, all that scholarship has perhaps made critics more comfortable about taking Ramírez seriously. No longer just a mental patient, he’s now a man fully reincorporated into history.

That has led some to demand that Ramírez’s reputation be upgraded. Thus Roberta Smith, in her New York Times review, declared that the show “should render null and void the insider-outsider distinction.” It’s a common refrain, but what do such statements mean, exactly? That Ramírez missed a bet by failing to do the rounds of galleries with his slides? That the Folk Art should have left the job of mounting this show to a more conventional fine-art institution?

The fact is that it’s only the outsider field, including the Folk Art Museum, that has allowed the work of non-art-world artists such as Ramírez to survive and be seen by the art-loving public. The Guggenheim discovered in the 1990s that a trove of splendid Ramírez drawings had been sitting unnoticed in its storeroom for 40 years. Those drawings are in the Folk Art show, but they’ve never been exhibited at the Guggenheim. Eliminating the outsider-insider distinction would return most artists in the outsider category to invisibility.

Certainly Ramírez deserves the same respect as any mainstream artist of genius. Who could argue with that? But it is no insult to Ramírez to say that his art reflects the idiosyncrasies of his mind as well as his Mexican roots. His lack of professional polish, his obliviousness to art conventions, the energy of his obsessive concerns—his art’s outsiderness, in other words—would mean little without his tremendous talent for visual form. But the combination is a big part of what makes Ramírez great, and the rest of us perhaps a bit uncomfortable.

It’s also true that nothing in Ramírez’s history or his medical file solves his fundamental mystery, the same mystery that enshrouds any great artist: How was it that talent and inspiration and opportunity came together in this person at this time, in just this way? And how does it outrun the specifics of its own making to speak to us with such transcendent force?

It is a bit difficult to characterize Ramírez’s structures—not quite buildings, but clearly aligned with them. Although the artist worked at a time that saw the beginnings of our contemporary culture, there is something both ancient and properly modernist about his efforts.

An expanse of dark is splattered with white. A figure walks beneath, turning back, as if momentarily, to wave. His reflection is held in a puddle at his feet; above him are large flowers and a vague map. The white spots are not stars, yet they guide us toward the concept of a night sky. C.G. Jung inferred that archetypes exist within each one of us. Our starry nights glimmer with ancient cosmic formations that can be understood, and as they are, we begin to discover our place among them. This painting is titled The Traveler’s Dream (2022).

Eleanor Heartney speaks with the artist Enrique Martínez Celaya about his two concurrent exhibitions, the beauty of physics and philosophy, and why all artists should aspire to be prophets.