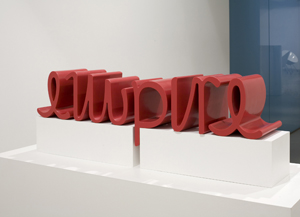 The title of Pedro Reyes’ first New York solo show, _Principles of Social Topology, _ refers to the work of German social scientist Kurt Lewin, founder of a psychological typology known as Field Theory. A “field” is defined as “the totality of coexisting facts which are conceived of as mutually interdependent.”

Immediately inside the gallery doors, a stenciled wall statement calculates the carbon footprint of greenhouse gases generated by shipping the art for Reyes’ exhibition from Mexico City to New York and by flights and lodging for the artist and his family. We are then informed that these emissions were offset by the methane and nitrous oxide capturing facilities at Driving Green Co., at the cost of $328, paid by Yvon Lambert.

While these facts succinctly orient us to Pedro Reyes’ comprehensive eco-socio-aesthetico-ethical concern, they do not yet hint at his brotherly warmth and humor.

Two reverse, inverse, perhaps even polymorphous-perverse figures dominate and mold this exhibition, one being the Klein’s bottle, the other the Moebius strip. By means of a chicane, the Klein’s bottle turns itself inside out; the Moebius strip is an all-on-one-side swoop, which in Reyes’ activist iconography clearly also has a political dimension.

Reyes’ aptly named “Gordian Knot” is a 3-seat, steel-and-fiberglass modernist Moebius chair affording both society and solitude. Similarly—maintaining that “the topological principle of the Klein’s bottle would enable a decisive shift from an either/or critique to an array of and/both scenarios”—Reyes offers the example of an eminently user-friendly suspended steel Tilt-a-Whirl cage big enough for two or more to explore, converse or cuddle up in. The geometry and rigid materials employed in Reyes’ recent social sculptures are suggestively swayed, waxing democratic, even empathetic. Strategically humanized, collaborative and now conscientious, the steel wire of his “Capula Klein’s Bottle” (2007) was wrapped by local craftspeople with common vinyl cords used to make cheap market baskets. Organic structural forms such as these happily remind us of Buckminster Fuller’s utopian domes, or awkward, out-of-date science fiction movies about the future.

Once while in upstate New York, Reyes— originally trained as an architect—learned of a building constructed in the shape of an elephant. In his “Fundamentals of Pachyderm Architecture” (2001) he and a friend then donned elephant suits and videotaped their public pilgrimage, eventually posing in front of what we might well call a “duck” (a la Robert Venturi’s Learning from Las Vegas) but which is instead a jumbo-sized inhabitable Indian elephant.

Santa Muerte is a popular religious cult figure favored by Mexican convicts, criminals, drug dealers and the police. In 2006 Reyes gave her a makeover, fusing the Catholic Virgin of Guadalupe with Mictlantechtli, the Aztec god of death. She now looks like the daughter of Darth Vader. He mass-produced this tchochke in bright resins then distributed it to street vendors, thereby moving to supplant and emancipate her image.

Today Reye’s offers his “Ambigrams” (2007): four solid-colored (red, black, white) flat Corian slabs approximately 50 inches long and 10 inches high fashioned into words which redirect or inflect depending on perspective. Standing just below eye level, the longhand letters of “Ambigram I,” for instance, read “Monument” from one side and “Trembling” from the other.

Pedro Reyes is the only artist I know of who calls buildings sexy.