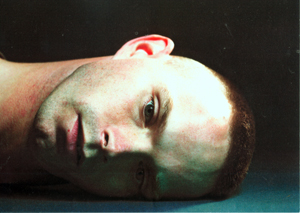 There are no skin grafts masking third-degree burns, no tangled cords of scar tissue, no missing eyes or shattered jaws in Soldier, Suzanne Opton’s exhibition of large-scale color portraits of recently returned veterans of Iraq and Afghanistan. Their translucent flesh, aside from a few post-adolescent pimples, looks unblemished, even otherworldly. Opton asked each of her sitters to lay his or head on a table, à la Brancusi’s “Sleeping Muse,” and photographed them with an extremely shallow depth of field, softly blurring the contours of their ears and hair while thrusting their faces into intimate sharp-focus, dwelling on every pore and stray eyelash.

Decontextualization is a grating and overused term, but this series of pictures would seem to define it. All you see are faces, six male and one female; nothing hints at their military service except the men’s buzz cuts. They are beautifully lit, with colored gels and diffuse shadows that accent the soft, sculptural roundness of cheeks, chins and foreheads. Only when you read the captions, “Birkholz, 353 Days in Iraq, 205 Days in Afghanistan,” “Pry, 210 Days in Afghanistan,” does the full significance of the imagery come through.

The press release from the gallery reports that Opton, “…wanted to look in the face of someone who’d seen something unforgettable.” But these photographs don’t communicate the soldiers’ memories. Although the pose that Opton requested of her subjects evokes the iconography of martyrdom—the head of John the Baptist or Thomas More on the chopping block—the images are essentially opaque. To peer into the eyes of “Claxton, 120 Days in Afghanistan” and attempt to imagine what he saw during his tour of duty is to create a false narrative, which is just another form of sentimentality.

Instead, what is most striking—and haunting—about the faces of these soldiers is their limpid youth and beauty: the rough-chiseled brow of “Dougherty, 302 Days in Afghanistan;” the Pre-Raphaelite eyelids of “Morris, 100 Days in Iraq;” the full, boyish cheeks of “Kimball, 287 Days in Afghanistan,” who could easily pass for a 12-year-old. They are only seven of the thousands upon thousands of equally beautiful young Americans who have been sent by our elected leaders, financed by our taxes, to kill and die in our name. These are the same soft, warm cheeks that are shredded into bloody rags, the same eyes and skulls that are pierced by snipers’ bullets and lacerated by shrapnel day after hellish day of Bush’s criminal war. Add context, and this exhibition is stomach churning.

One approaches the montages squinting, blinking, and straining to piece together their arrangements. No matter how hard the viewer attempts to “get it,” the works’ resolution remains just out of reach.

The Eyes of Another: “Tokyo Stories” at the Japan Society

Inked in 1951, the Treaty of San Francisco specified the compensations and conditions Japan had to comply with following its defeat in World War II, essentially marking the nation’s first steps toward regaining sovereignty, but it also affected the cultural landscape of the country.